The $1.1 million GT-R50 is a triumph of Nissan’s supercar legacy 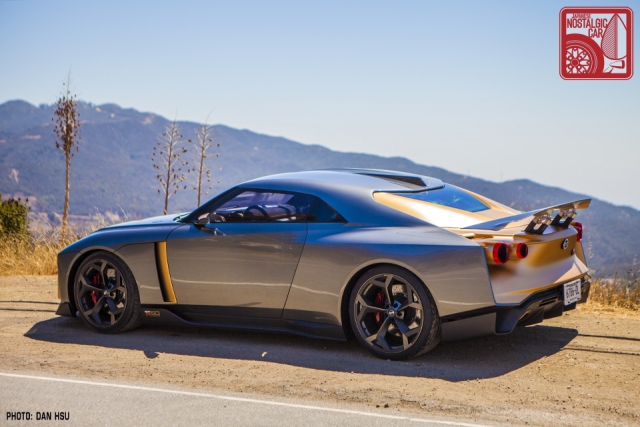 Supercars aren’t what they used to be. In a literal sense, they are, of course, quite a bit more than what they used to be. Nowadays, you have cars that spew a thousand horsepower, cars that easily stride to 200 miles per hour, and cars that charge from 0-60 in the two-second range. To a supercar just reaching the 25-year threshold of classic-dom, such figures were a pipe dream. And yet, who among us wouldn’t rather have a Ferrari F40, Porsche 959, or McLaren F1 than whatever matte black wrap is rolling down Sunset Boulevard at this very moment? 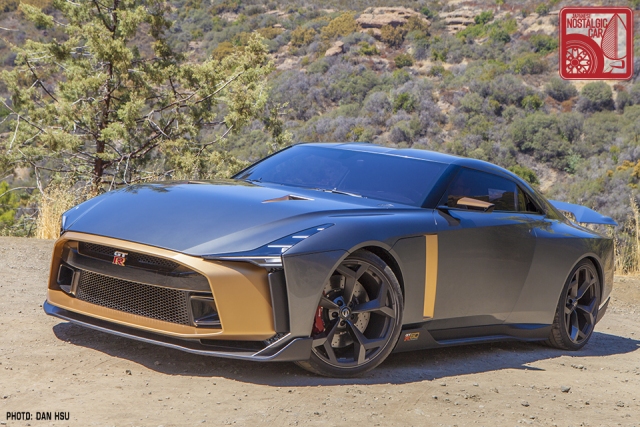 Those cars represented the pinnacle of engineering for their respective marques. For their respective nations. The goal, first and foremost, was to build the best performing car humanly possible. That they happened to look and sound out of this world was a function of their, well, function. 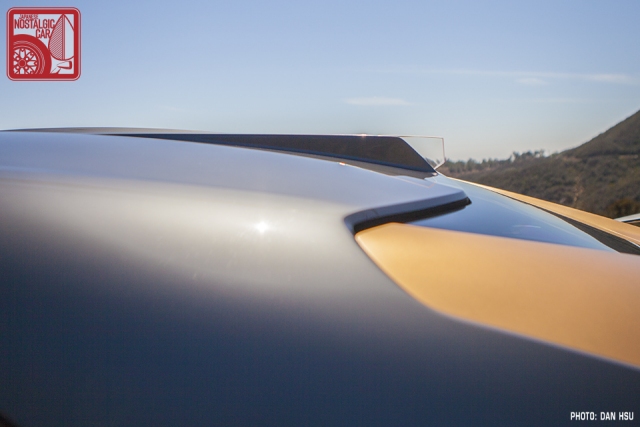 Nowadays, there are more supercars on the market than actual sports cars like the Mazda Miata or Subaru BRZ. And unless you’re trying to break a Nürburgring record, most have more capability than any mortal would ever need. As a result, each horsepower stat, each exhaust pop, each induction growl piped into the cabin feels like it was engineered more to advertise the owner’s credit limit than enhance the driving dynamics of the car. 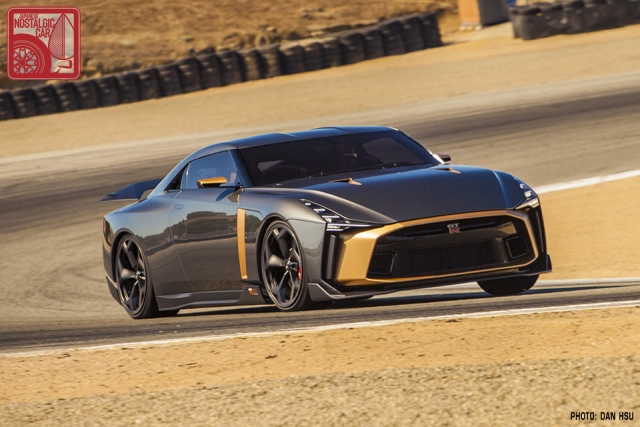 In this cacophony of rolling baubles designed to bark along the shopping streets of Knightsbridge, there remains one supercar that’s still pure, the Nissan GT-R. Especially in NISMO guise, its 600-horsepower twin-turbo V6, 2.7-second 0-62 time, and 196 mph top speed is already insanely impressive right out of the box. In the grand tradition of Japanese tuner cars, you can spend a little (or a lot) more and extract even more ludicrous 4-digit horsepower figures, something no owner of a Bugatti Chiron would ever do. 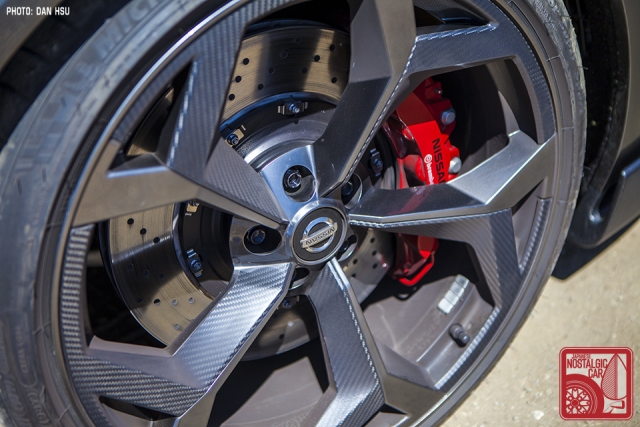 In the end, you’d still have “just a Nissan,” and to some that is a bad thing. Instead, we would argue, that’s actually a very good thing, because it means the driver isn’t out to woo an Instagram model with a rap song-referenced brand. It’s the only supercar which allows you to claim that you bought it for its abilities and nothing else. You don’t need to be on a special list to buy one, you don’t need get waitlisted for something artificially capped to maintain exclusivity, and you don’t even need to be that rich. A base GT-R starts at $99,990. 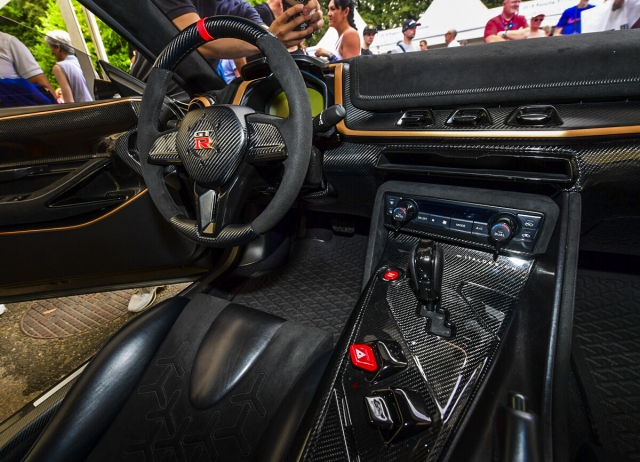 “But,” you say, “Now Nissan is coming out with the GT-R50, which also has a seven-digit price tag, is more limited than a Veyron, and has some kind of secretive buyers’ list!” Yes, that is all true, but consider this. For a brand that has spent most of its life hawking Stanzas and Hardbody pickups, scaling the mountain of respectability has been a painstaking journey. It’s had to earn the right to command this kind of dough. 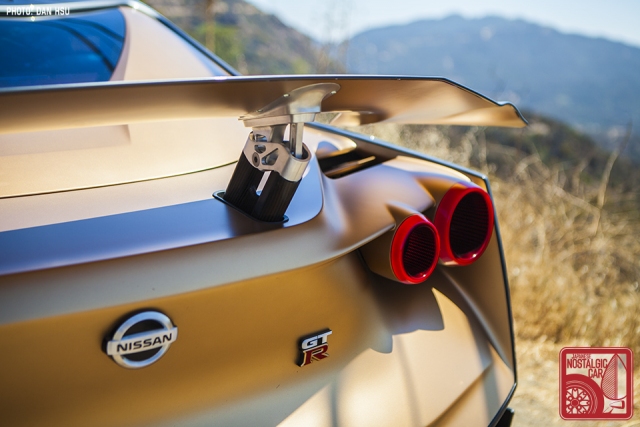 When you start out in an exclusive club maintaining that clout is easy, even if you take a generations-long leave of absence. For an ongoing budget brand, there’s nothing harder than convincing someone to see you in a luxury light. After all, a $1.1 million GT-R50 wears the same hamburger that’s glued to the trunk of a $12,000 Versa. No other supercar maker also makes hatchbacks and minivans, and if Nissan can get people to sign off on a million-plus price tag, it would be a brand inversion triumph of the highest order. 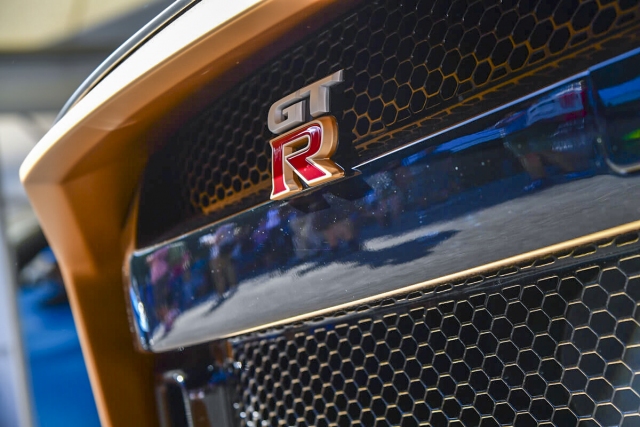 The Nissan GT-R50 was built to celebrate 50 years of the GT-R, a name that boasts an incredible racing history. Its legacy and supercar-killing performance became the stuff of legend, even though the cars were never, until this current generation, intended for sale outside their home country of Japan. 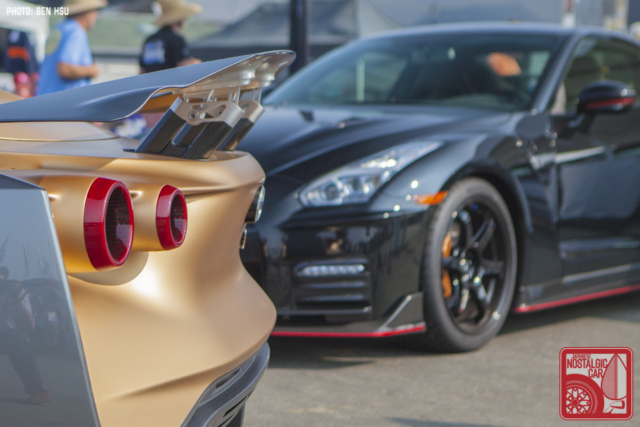 Under the GT-R50’s sheetmetal are the guts of an R35 GT-R NISMO. However, the prototype we drove didn’t have the 720-horsepower engine promised in the press release. Rather, it bore the standard NISMO drivetrain with an upgraded exhaust breathing a mean snarl. Production versions, according to Nissan Global PR Manager Neil Reeve, will get its power boost from what is essentially a street-tuned version of the GT3 race engine. 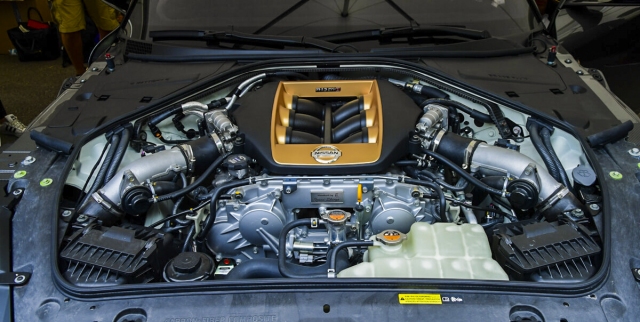 A GT-R NISMO stickers at $175,540 and a body-in-white GT-R GT3 rings in at $550,000. The bulk of the GT-R50’s cost, then, is in the skin. Designed by Nissan, each car will be built at the GT-R’s Kaminokawa, Tochigi plant and then sent to Turin, Italy. There, the body will be hand-formed by renowned Italian coachbuilder ItalDesign. 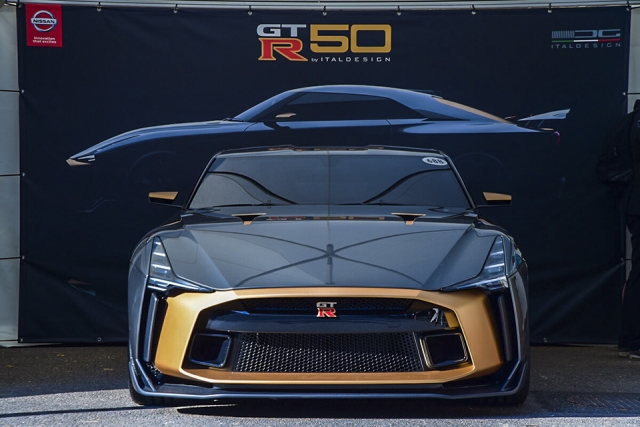 The project began when ItalDesign approached Nissan at the Geneva Motor Show a few years ago. The carrozzeria is known for a design portfolio whose clients include everyone from Alfa Romeo to Volkswagen. Its founder and star designer, Giorgetto Giugiaro, penned famed cars like the BMW M1, Lotus Esprit, VW Scirocco and many more. For fans of Japanese cars, he had a hand in the Isuzu 117 and Piazza/Impulse, first-generation Lexus GS, and Subaru SVX as well. 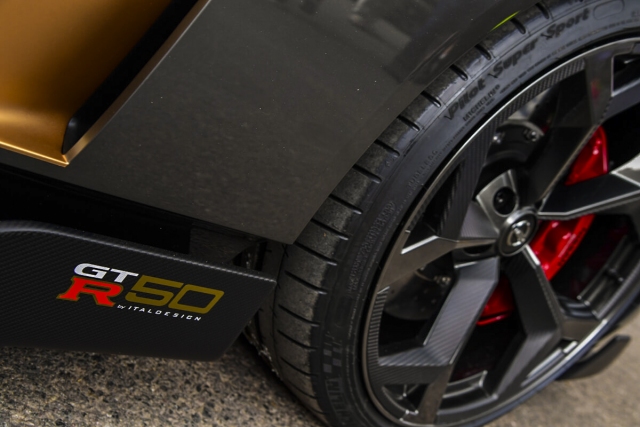 It was a fitting collaboration for two reasons. ItalDesign was founded in 1968 and would be celebrating its 50th birthday around the same time Nissan was launching the GT-R50. Secondly, one of ItalDesign’s founders, Hideyuki Miyakawa, was Japanese-Italian and had facilitated Giugiaro’s early work (when he was with Bertone) with carmakers such as Mazda and Isuzu. The ties between ItalDesign and Japan run deep. 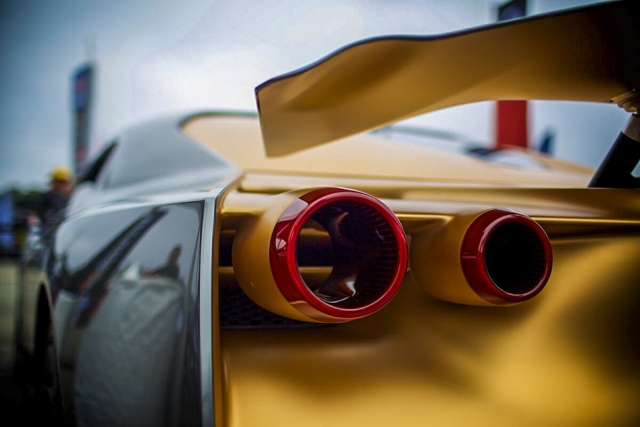 Nissan’s head of design Alfonso Albaisa loved the idea, and immediately got to work. The bulk of the design was conducted at Nissan’s studio in La Jolla, California, but for the finishing touches the project was transferred to its London studio due to its proximity to Turin. 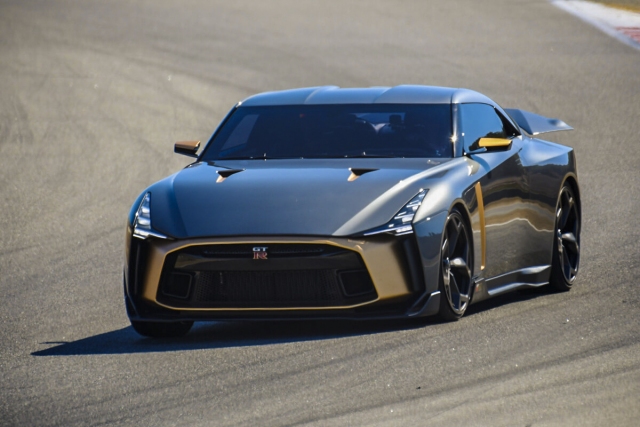 It’s hard to get a sense of how dramatic the GT-R50 is until you see it in person, in motion, charging down the road. The car sits 45 mm (1.8 inches) lower than a regular GT-R and is about 20 percent wider. It doesn’t share a single panel with the standard R35, and yet it’s instantly recognizable as a GT-R. 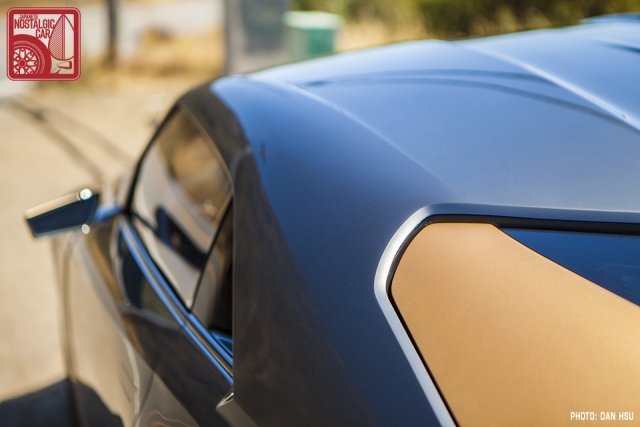 It also hides plenty of clever details that can’t be seen unless you’re standing right next to it. The rear quarter panels, C-pillars, and roof, for example, are all one flowing form of sheetmetal. As such, there’s no seam between the pillars and roof panel, as you would see on a mass-produced car. It’s not just for looks; the design provides additional downforce as air passes behind the C-pillars and exits through exquisite floating-afterburner taillights. 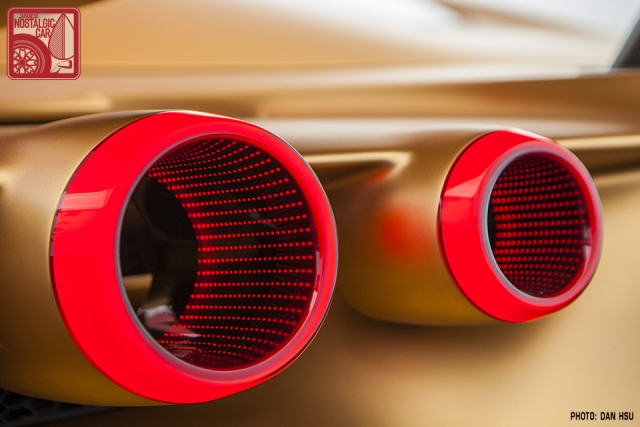 The suspended crimson rings take the quad round taillight motif, a signature cue of the GT-R since the 1972 Kenmeri Skyline, and highlights them with a mesmerizing effect. While it’s not the first time hanging circles have been used — they first appeared on the Nissan 2020 Vision Gran Turismo — here they waterfall inward, rows of red dots drawing you toward the center. 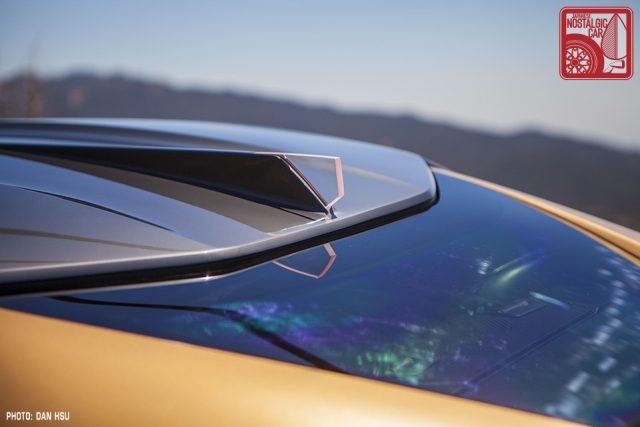 The CHMSL is another sharp element, protruding from a fin-like structure on the roof. It’s a transparent wedge whose red glow is visible only from behind, a lovely detail that’s elegant and high-tech all at once.

A retractable rear wing can be deployed by switch. It’s not speed-activated, at least not on the prototype. When up, it resembles the spiritual successor of the trademark spoiler on the Hakosuka Skyline GT-R with its downward-facing angle. Even in the down position, though, from some angles the GT-R50’s boxy rear recalls the Hako as well. 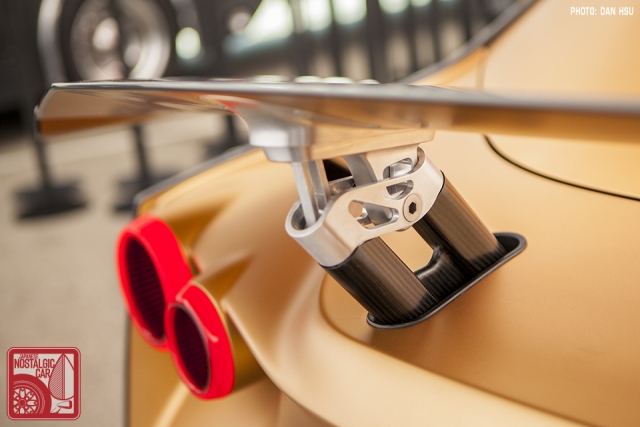 The spoiler’s arms are another detail that look at once beautiful and starkly mechanical. They stand in sharp contrast to the flowing lines of the rest of the rear, but give off a retro, steampunk vibe. Hidden beneath the wing, they’re a peek into the techno wizardry lurking beneath. 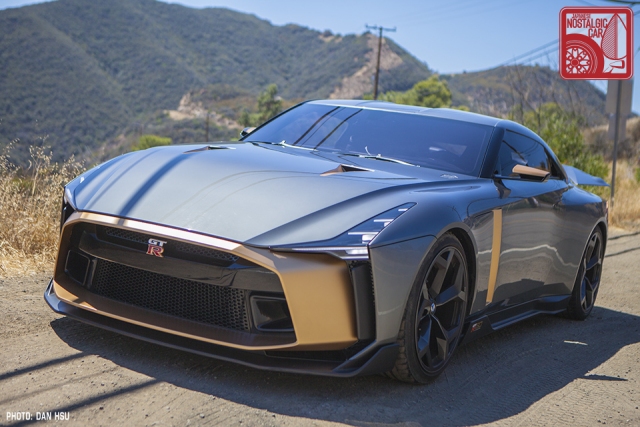 The front grille is probably the GT-R50’s most controversial styling cue. Albaisa had an explanation for us, though. “The heart of the GT-R is its turbo engine,” he said. “It’s a play on the grille of the R35, an expression of power. The mouth is feeding the engine.” 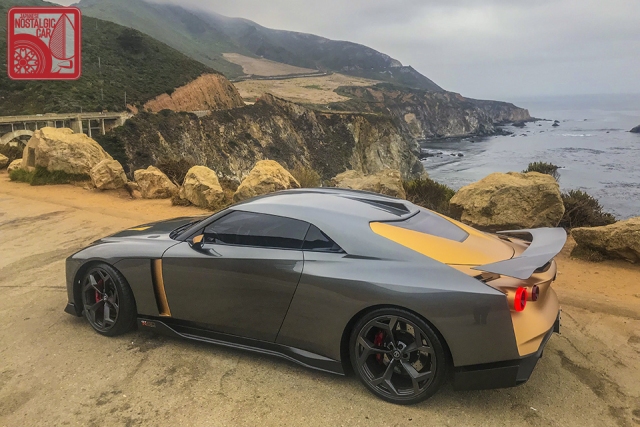 In theory the two-tone scheme, the way the colors divide, shouldn’t work, but somehow it does. The gray, Albaisa tells us, is meant to evoke machine-like metal, but it’s not a cold gray. There’s a hint of brown, a silkiness to connect to the “Italian sexiness” of the sheetmetal. The gold was inspired by the decor on Japanese lacquer boxes, but also the high-tech heat-repellent foil found on Formula One cars. Since each car is hand-made, customers will have a certain degree of customization, but what specifically Nissan didn’t disclose. 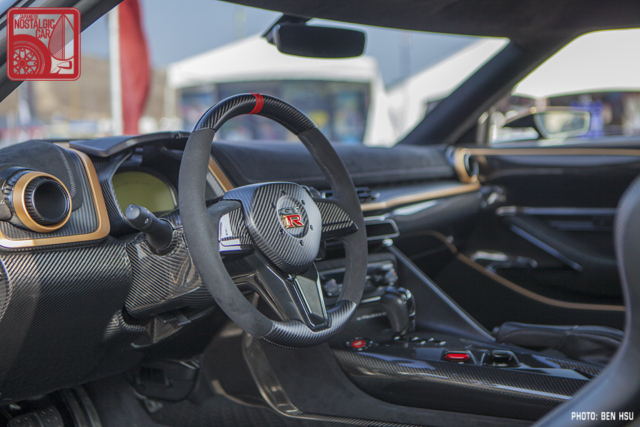 The interior, too, has been drastically reworked. Whereas the GT-R’s was literally designed to resemble a PlayStation game, the GT-R50’s retains the tech-heavy look but adds a touch of style. It’s not so much a dizzying Space Shuttle cockpit of meters and buttons anymore, but the generous use of carbon fiber keeps it on the cutting edge. 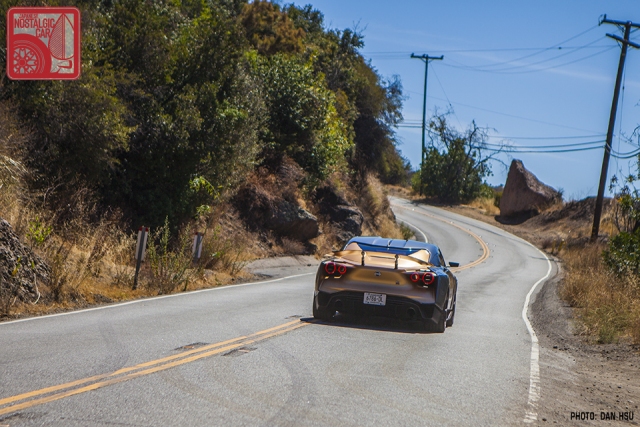 Even without the proper GT3 engine, the driving experience bordered on the religious. Like the R35 NISMO, the car never lets you forget that there’s a purpose-built machine underneath. The rear-mounted dual-clutch transmission whirs and gnashes behind you, snapping off shifts as it rockets you forward. You might be behind the wheel, but the car almost has a mind of its own, wanting to charge ahead simply because the engine, trans, and wheels possess so much kinetic energy. It’s probably as close as you can currently get to a Gundam mobile suit. This one just happens to have a more curvaceous bod. 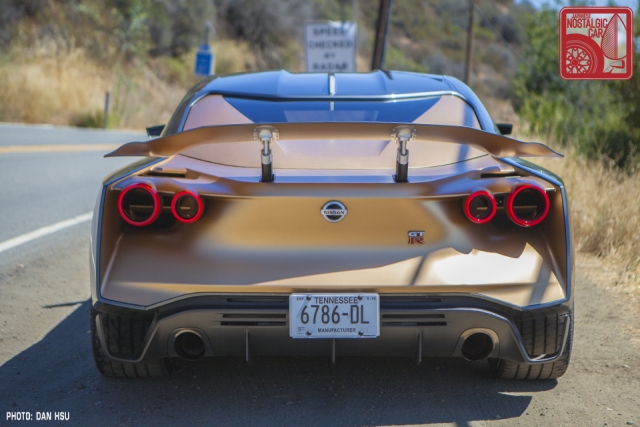 We wanted to keep the world’s only hand-built GT-R50 in one piece so we didn’t push it too hard. Anyway, the chopped roof, redesigned rear window, and tiny slivers of side mirror make visibility a challenge and the cabin very tight. On the touge roads of the Santa Monica Mountains, any GT-R would feel too big; one with priceless custom body work felt even larger. No matter what, though, the GT-R50 feels very special. It was like driving a jewel. 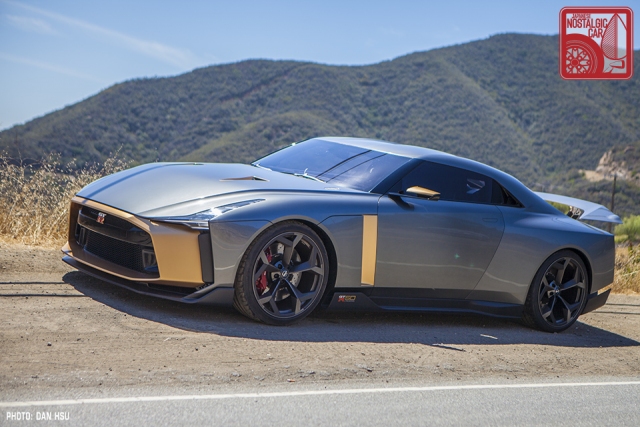 The GT-R50 isn’t about reason. If you’re looking for a horsepower-per-dollar ratio, there’s really no justification. Plus, the regular GT-R already has the ultimate bang-for-buck rate covered. Nissan originally said that if it received enough customers willing to drop $1.1 million each, they would build 50, one for each year of GT-R legacy. In other words, the GT-R50 would never exist as anything more than a pie-in-the-sky concept unless it could sell out its entire production run. 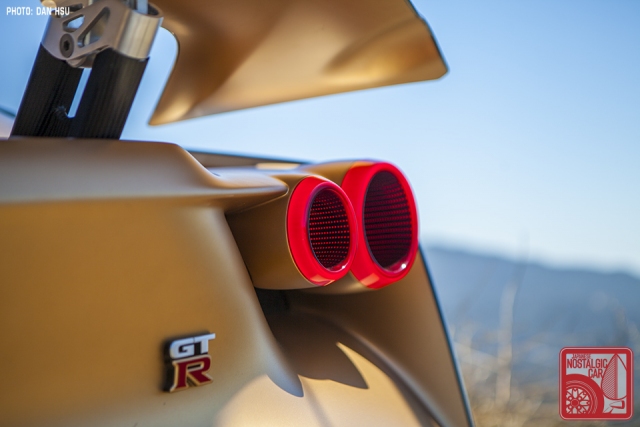 Yesterday we received word of the latest tally. “While we can’t disclose details of confirmed sales, more than 100 serious inquires have been made,” Nissan spokesperson Kyle Torrens told us. “This serious interest that has led us to confirm production.” So, there you have it. The world has spoken, and it finally has welcomed a Nissan GT-R to the million dollar club.

Unlike every other car that shares this honor, however, it got there on nothing but its own merit. Others can’t truly be separated from their status as status symbol, fame from proximity to a celebrity, or the tentacles of some well-conceived marketing exercise to drum up an manufactured sense of exclusivity. The GT-R, on the other hand, came from the bottom up, building from humble mass-market roots legions of devoted apostles, a solid reputation for true performance, and an unassailable motorsports pedigree. There may never be another car like it again.

permalink.
This post is filed under: Next Version and
tagged: gt-r, GT-R50, nissan, r35.

9 Responses to The $1.1 million GT-R50 is a triumph of Nissan’s supercar legacy