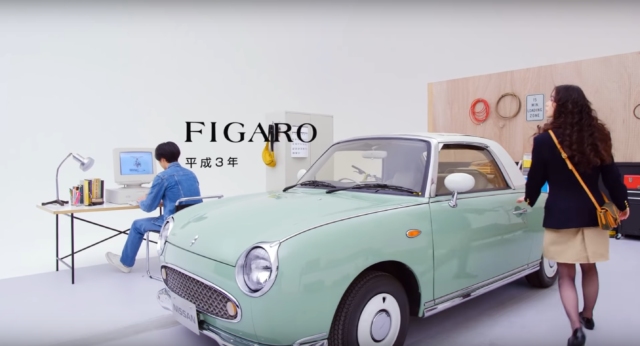 While most of America was watching the commercials between a big contest of Jeep crossovers and Dodge pickups, Nissan released a new advert tracing the arc of automotive trends of the last 30 years. Using only Nissan cars and a jaunty music accompaniment, the ad capitalizes on 90s nostalgia and tricky camerawork. It begins innocently enough — a couple starts out with a Nissan Cefiro in their garage, a cathode-ray television, and a pile of VHS tapes. Soon the Cefiro is replaced by a Skyline GT-R, and life seems great at the height of the Bubble Era.

A lot of great cars whiz by — a Figaro, Rasheen, and March — as the household electronics evolve into a PC, flatscreen, and and so on, but the cars get progressively more depressing. In the early 2000s, there’s a brief glimmer of hope when a Z33 Fairlady Z appears momentarily, but its presence is as fleeting as the bloom of a cherry blossom tree. The ad is supposed to show how great the evolution of cars and technology is, but we’re not sure it has the intended effect. By showing its most iconic models, Nissan isn’t making people think, “Hey, I’m so glad I traded in my R32 in for a Note!” The ad probably would’ve worked a lot better if successive generations of like models were shown instead.

However, the camerawork is truly amazing, and Nissan has provided a helpful “Behind the Scenes” video showing how the commercial was made. At least Nissan has a giant collection of heritage cars that it can draw on to make a commercial like this. Many manufacturers would’ve had to source them outside.