It was a relief to wake up this morning and find the planet still here, meaning we survived those wacky scientists flipping the switch on the Large Hadron Collider. Here’s another story of survival. In 1972 Nissan introduced the Sunny Truck to South Africa, based on the B110 series Sunny (known as the 1200 here in the US). But while the passenger car evolved into the B210 a few years later, the Truck continued largely unchanged for 37 years. Until now, that is.

It’s not often a chassis outlasts its own name, but here it is. The original Datsun 1200 got a displacement bump in 1980 to become the Datsun 1400, and finally shed the old brand name to become the Nissan 1400 in 1990. Known as the Bakkie, it became synonymous with South Africa’s motoring landscape thanks to its low price and honest dependability. To retire the model with dignity, Nissan South Africa is sending it off with a run of 150 Heritage Edition Bakkies. If you submit a heartfelt story to them, you could win one of the Last 1400 Bakkies. 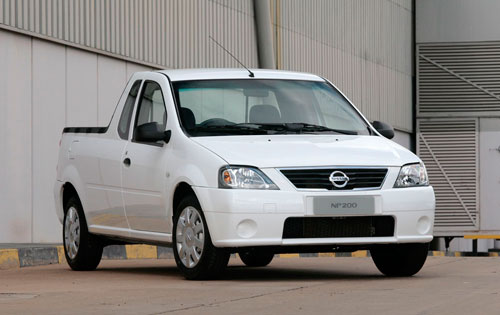 And here’s the replacement, the NP200. It’s based on some kind of Nissan-Renault shared platform that underpins the Nissan March, Dacia Logan, and Renault Brand Dilution. It goes on sale next month, as soon as Mr. Bean is done taking a swim in his giant vault of euros.

permalink.
This post is filed under: datsun, nissan, trucks.

3 Responses to Nissan 1400 Sunny Truck Put Out to Pasture