NEWS: Can you spot all the nostalgic styling cues of the Suzuki iM-4 Concept? 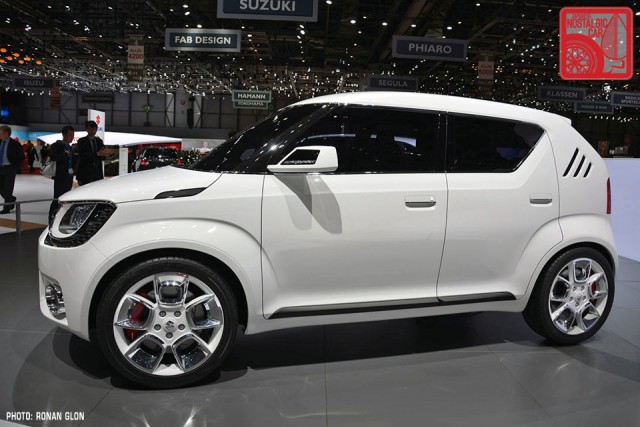 Suzuki may be gone from the US market, but it’s alive and well in the rest of the world. The 85th Geneva Motor Show is going on right now, and its automotive branch unveiled this morning the Suzuki iM-4 Concept, a compact 4WD laden with styling cues from Suzuki’s past models. Can you spot them all?

The first thing we noticed was the three rear vents on the C-pillar, a reference to the Suzuki Fronte Coupe kei car built from 1971-76. Even the swoop of the rear glass seems to match, though it’s extended to accommodate an extra set of doors on the iM-4. Chief Designer Kazushi Uchiyama says that the key phrase for the design is “Simple and Iconic” and that “it carries Suzuki DNA in every detail.”

Slightly less obvious was the headlight graphic, which apparently takes its shape from the grille of the 1977-82 Cervo, a successor to the Fronte with the option of larger-than-kei engines. The bigger mills forced the addition of a hump and a snout in the hood, interpreted on the iM-4 as a slimming of the grille and a pull-back of the headlight surround towards the A-pillars.

Speaking of A-pillars, the hood shutline just below them has a small trapezoidal slot, a reference to the 1988-98 Escudo, sold as the Suzuki Sidekick or Geo Tracker in the States. It’s a clever way to break the monotony of the sheetmetal expanse between the wheel arch and the door without adding a chintzy fake fender vent.

Lastly, the side DLO appears to match that of the zippy little 2004-10 Swift, a car we sadly never received in the US. Uchiyama says that the design was meant to be “innovative yet somehow nostalgic.”

Powertrain-wise, the iM-4 has little do with any of the cars listed above. Instead, it’s a “mild hybrid,” which uses an integrated starter-generator, or ISG, paired to its 1.2L petrol engine to kickstart the engine, charge the hybrid batteries and provide some additional oomph. Unlike some designs that try to evoke nostalgia but fall flat on their face, though, the iM-4’s engine still feels connected to the Fronte, Cervo, et al, in spirit.

7 Responses to NEWS: Can you spot all the nostalgic styling cues of the Suzuki iM-4 Concept?