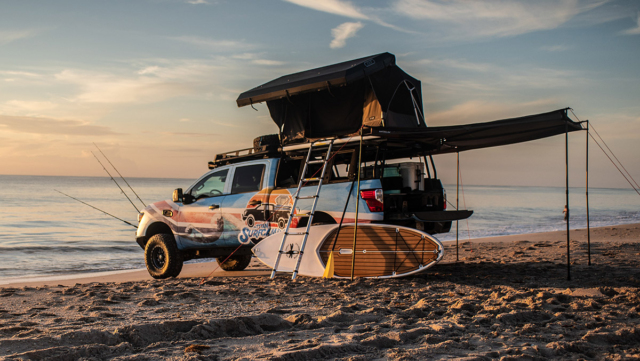 To celebrate summer Nissan has created a show truck called the Titan Surfcamp, modded to the nines and described a “beach oasis.” Nissan says it was inspired by the beach trucks of the 1960s and 1970s, old Patrols, and — get this — the Hot Wheels JNC Surf Patrol Datsun 510 Wagon!

Nissan often creates show cars with specialized themes. Back in February, for example, they built a winter rig called Armada Snow Patrol (get it?), as well as a bonkers 370Z with snow tracks and skis. Now that it’s beach weather, the Titan Surfcamp provides a slew of aftermarket additions designed for surfing, fishing, paddleboarding, and oceanside camping. It’s a beach bum’s dream come true.

The Titan is equipped with racks for boards, there’s a roof-mounted tent, a deployable awning called the Batwing, and the seats are finished in a wetsuit-like material. There’s even a solar-powered exterior shower so you don’t get sand all over the interior after your beach outing.

For us, however, the absolute coolest part is this passage from Nissan’s official press release:

How cool is that? To be completely transparent, we at JNC didn’t have anything to do with the creation of this truck, but we are still stoked about it!

Underhood is the Titan XD’s 5.0-liter V8 turbodiesel making 310 horsepower and an earth-moving 555 lb-ft of torque. Though the Surfcamp wasn’t designed with this in mind, its 11,280-pound towing capacity would make it a pretty rad hauler for a Datsun race car and trailer. 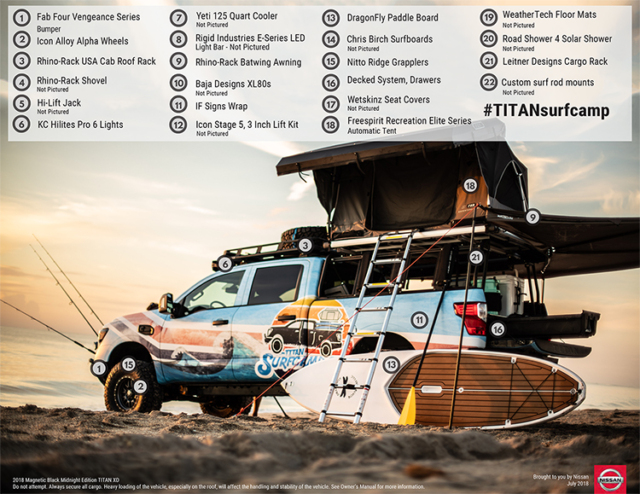 Nissan has helpfully included a graphic that shows every modification made to the Titan. It’s kind of cool that Nissan still makes official cars like this to demonstrate, if you wanted to mod it like crazy, the potential of the truck. We dig it.

permalink.
This post is filed under: News and
tagged: nissan, Titan.