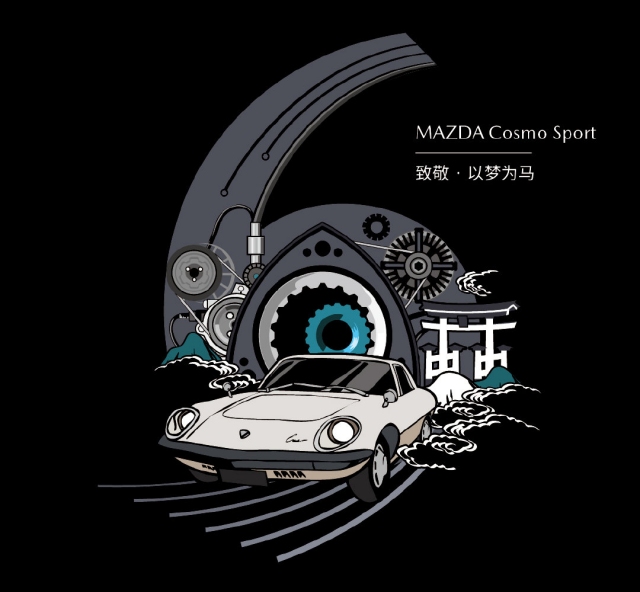 It seems that Mazda is about to reveal some news about the rotary engine. The company published the above graphic of a 1967 Cosmo Sport, Mazda’s first rotary-powered car, along with a countdown indicating that there was some rotary goodness coming our way. There’s only one catch — all the information was in Chinese.

Here’s the full image posted by ChangAn Mazda, the company’s joint venture in China, to their Weibo (the Chinese equivalent of Twitter) account and discovered by Jalopnik. The illustration shows not only a Cosmo Sport, but an older rotary engine looming behind it, along with the torii gate and islands in Hiroshima Bay, landmarks of Mazda’s hometown. Clearly, there’s a lot of rotary engine imagery, but what about the text?

Based on what Chinese I can read, beneath the words “MAZDA Cosmo Sport” are 致敬, which means “tribute” (like an homage, not the Ford Escaped-based SUV, we presume) and 以梦为马, which means literally “By dreams for horse.” Of course, that doesn’t literally refer to a horse, but is a clever pun on Mazda in Mandarin, which is 马自达. In Chinese, when there are no direct translations from other languages, such as in names, similar sounding words are substituted for the syllables. 马 means horse and is pronounced “Ma,” 自means self and is pronounced  “zi,” and 达 means to achieve or arrive and is pronounced “da.” Therefore, it can be seen as an allusion to Mazda’s philosophy of jinba ittai, or “horse and rider as one.”

Further down, the first line, 梦的魔力转圈圈, can be translated to “The magic of dream rotates in a circle,” a reference to the magic of the rotary engine. The next line, 爱你爱到黑夜白天, can be translated as “Love you from the dark night to the bright day.” I think it basically means love you (as in the rotary or the car) all the time and is some kind of advertising-speak. The third line, 转子引擎让世界多一份惊艳, or “The rotary adds one more stunning thing to thee world.” Lastly, the fourth line, 6天后驭见次世代 says, “in six days, it will meet the world.”

Captioning the image in the Weibo post were the words 这是今秋最“6”的开场白, which translate as “This will be the most ‘6’ prologue of the fall. In Chinese, 6 is a lucky number, and it is used here as a pun. Perhaps something about the Mazda 6? The next line, 言语无法描述的惊艳, says, “This will be something so stunning words cannot describe it.” The last two lines, 倒计时6天 and 请你一起用心观看 remind us that the countdown is for six days, and and to please watch.

The post was published September 20, meaning we will have our result soon. What could it be, though? It seems there is definitely going to be some rotary engine development, and we think that means we will finally see the rotary engine range extender for a hybrid-electric powertrain make its debut.

However, all the “6” references are throwing us off. This might be a reference to the next Mazda 6, which could be the straight-six, rear-wheel-drive sports sedan that Mazda is working on. Also, the Tokyo Motor Show takes place October 24, so it seems unlikely that a major announcement would come so soon before that showcase event.

Taking all of this together, along with the information we’ve learned from our sources, the countdown will probably be a teaser for two Tokyo Motor Show debuts, a range-extending rotary-engine (RERE, if you will), and a concept showing the direction of the RWD sports sedan.