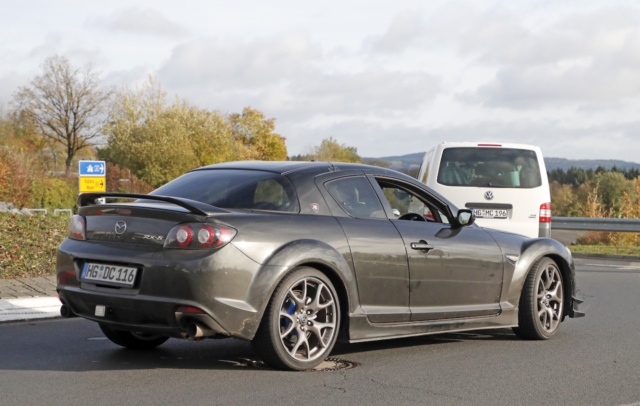 Last year we reported that Mazda appeared to be running an RX-8 test mule in Europe. The RX-8, as you know, has been out of production since 2012, and a rotary engine successor has gone through more cycles of rumor and denial than Half-Life 3. We are happy to report, however, that this test vehicle is still at it. In fact, it has since shown up with a companion at the famed Nürburgring.

As captured by Carspotter Jeroen, registration number HG DC 116 was spotted lapping the green hell in a video posted July 23. Exactly when the car was filmed is unclear, but the appearance of other test vehicles (such as a prototype dual-clutch Hyundai Veloster N) dates it to sometime this year. Sharing the track this time was registration number HG DC 117, a blue RX-8 that curiously wore a camouflaged nose that perhaps drew rather than evaded attention. The letters “HG” in these cars’ registration numbers indicate that they come from Hochtaunuskreis, the German county in which Mazda’s European R&D Center is located.

We believe that Mazda has been testing a rotary engine with the black RX-8 Spirit R-based car. Though Mazda has publicly denied rumors of an impending rotary sports car, rotary engine development within the company persists. Mazda has indicated interest in bringing to the world something like the RX-Vision, though at this point it’s been over three years. A rotary engine range extender electric vehicle (RERE?), however, has been confirmed to be in the pipeline.

Of course, there could be a number of things these cars are testing — from various electronics to drivetrain. They could also be test mules of the upcoming RWD platform powered by inline-6 engines. If that were the case, however, Mazda did an exceptional job fitting RX-8 body panels to the new FR chassis.

Going by the sound of the cars in the short video, though, it’s almost certainly the serenade of a muffler’d rotary engine. The blue car, on the other hand, could be testing the range extender.  It’s a lot quieter than the black one, almost silent other than tire noise, and it also seems to be going a lot slower.

If Mazda were to test a next-generation rotary engine, using the chassis of an RX-8 does make sense. We have heard from Mazda sources that rotary engine development continues, though whether market conditions will allow them to be brought to market are unclear. The fact that the same car appears to be regularly used for testing, and that there are now two of them being run on the Nürburgring, certainly seems to support that claim.