On May 1, Japan’s newest Emperor, Naruhito, took his first ride as the head of the royal family to a ceremony at the Imperial Palace in Tokyo. Of course, the media was very interested in his inheritance of the swords and crown jewels that are passed down from one generation to the next, but what was truly interesting was the Emperor’s new whip, a Toyota Century Royal.

The Century Royal is based on the production Toyota Century, a car that is so steeped in tradition that it took 50 years to make three generations and still features many hand-made parts. The royal family’s new rides, however, feature many new modifications — not quite the kind that Akio Toyoda likes — but that are nevertheless unavailable to plebeian buyers like CEOs and government officials.

The Century Royal is extended by 35 inches to accommodate three rows of seats. They also feature a high roof and enlarged windows, so the royals can be seen waving to the public as their motorcade rolls by.

There are no official “Toyota” or “Century” badges or logos on the car. Instead, it wears the gold chrysanthemum that is the Imperial Seal of Japan and the family crest. In lieu of a license plate, the car wears a small silver identification plate on the corner of the grille. This 10cm badge displays the Imperial Number, which is typically in the single or double digits, depending on its place in the royal fleet. Where the actual front plate would normally sit is another seal. 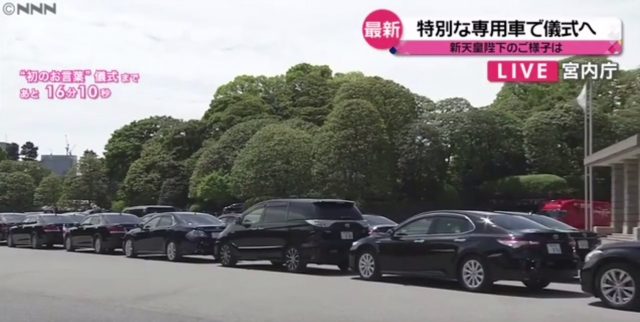 Also interesting are the cars in the royal motorcade. As you can see most are Toyotas as well, with Crowns, Lexus, and even an Estima minivan in the mix. On the end is a Nissan Fuga (Infiniti Q70) as well. Nissan’s scandal with its president may have put them out of the running for the emperor to sit in, but apparently Nissans are still okay for the motorcade.

The Century Royal is part of a new fleet that includes a several Century variants. Those include a black, wagon-like sleeper car (which looks disturbingly similar to an American hearse but not a Japanese one, which is typically festooned with gold) and an open-top parade car for special occasions. The Century Royal will still be used as the royal family’s primary mode of transportation though.