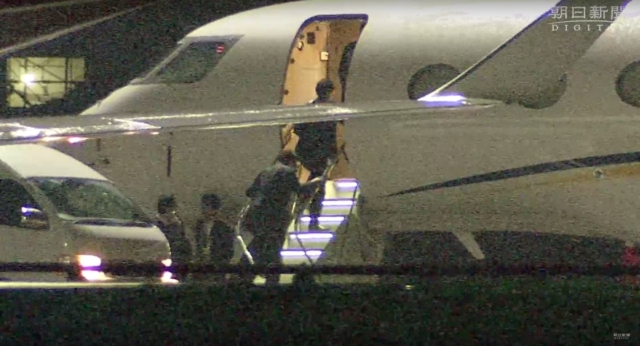 Asahi Shimbun has obtained video of agents of the Tokyo District Public Prosecutors’ office intercepting Carlos Ghosn’s private jet as it lands at Haneda Airport. The footage shows several besuited agents arriving on the scene and boarding the aircraft. Once they enter, presumably to bring Ghosn in, the privacy shades on the jet’s windows all lower at once.

Ghosn served as CEO of Nissan from 2001 to 2017, during which he is credited for steering Nissan out of bankruptcy. However, that turnaround came at a price, with some 21,000 jobs lost, five factory closures, and a departure from the types of products that many loyal Nissan customers consider the soul of the company.

Ghosn stepped down as CEO of Nissan in February 2017 in order to focus on the Renault-Nissan Alliance and Mitsubishi Motors, whose takeover by Nissan Ghosn oversaw. Ghosn is alleged to have under-reported his salary by $44 million in violation of Japanese financial law, and to have misused company funds.

Agents can be seen standing in the aisle of the company jet before the shades lower. At the same time, around 5pm local time, agents arrived at Ghosn’s penthouse apartment in the high-end Moto-Azabu district of Tokyo and Nissan headquarters in Yokohama to search for evidence. Interesting side note: the tail number, a unique alphanumeric sequence used to identify aircraft, is NI55AN.

About three hours later, some of them deplane, but the video stops short of showing Ghosn’s perp walk, leaving the executive some semblance of dignity. Perhaps the greatest disgrace in all of this? The agents from the prosecutors’ office arrive in not at Nissan Caravan, but a Toyota HiAce.

For more on Ghosn’s arrest and firing, click here.