VIDEO: If you’re in St Louis check out this great Honda museum 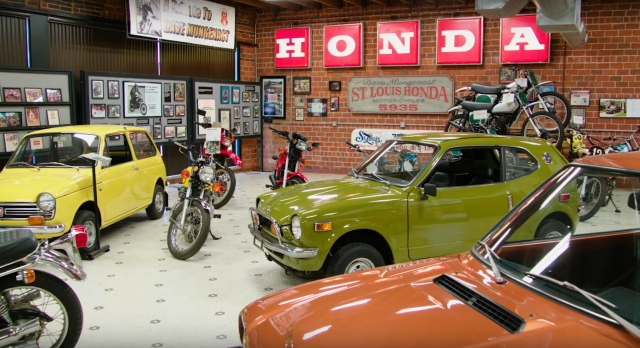 The Mungenast Classic Museum in St. Louis, Missouri is what we all hope our collections look like when we pass on. Founded by Dave Mungenast, a man described as a Green Beret, stuntman, American Motorcycle Association hall-of-famer, and car dealer, it’s a shrine to his life’s work and a showcase of the countless cars, motorcycles, and memorabilia he collected over the decades.

Mungenast opened his Honda motorcycle dealership in 1965. Eventually, as Honda began to sell cars in the US he expanded his network. These videos produced by Honda USA show many of the early cars in his collection, including an S600, Z600, CVCC Civic, (amazingly) a pair of S500s, and an N600 with the shipping plastic still on the interior door panels.

However, the real jewels of the collection are the dozens upon dozens of Honda motorcycles. Nearly all significant milestone bikes that were sold in the US are represented, including an auxiliary generator for a bicycle, one of Honda’s earliest products.

Since this video is produced by Honda, that’s where the focus is. However, Mungenast’s dealer empire expanded to many other brands, including Jaguar, Chevy, Ford, Hyundai, and Toyota. A quick browse of the official website reveals that the collection contains several Toyota trucks, Land Cruisers, and a mint Toyota Corona Mark II hardtop. There’s also motorcycles from Suzuki, Kawasaki, Yamaha, and about 30 other manufacturers from around the world. Oh, and there’s probably the cleanest Hyundai Excel left in the US. We’ve passed through St. Louis several times and missed this because we didn’t know it was there, but it’ll definitely be a stop on our next visit.