With the news of Mr K’s passing this week, we thought it might be a good time to reflect on his accomplishments, both in and outside of Nissan. Yutaka Katayama’s work extended far beyond the walls of Nissan Motor Corporation, and benefitted the Japanese auto industry as a whole. Case in point: Katayama-san was one of the founding fathers of the Tokyo Motor Show, and designed its original logo. 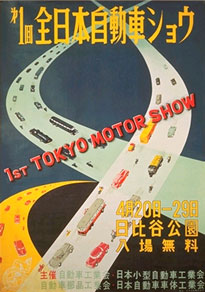 Before 1954, the idea of all of Japan’s automakers — rivals in an industrial age “Wild West” atmosphere — getting together under one roof to show their wares was an alien concept. As Katayama tells the story, at the time each automaker’s CEO was in charge of showing his company’s products to the public separately.

Inspired by an auto show he saw in a magazine, Katayama reached out to his counterparts at rival companies and suggested the id

ea of one large show where potential buyers could see all the cars in one place. It was met with strong opposition at first, but eventually they came around to Mr K’s point of view.

The first All-Japan Motor Show was held April 10, 1954 in Hibiya Park in the middle of Tokyo. The show needed a logo, and Katayama came up with the image of a Grecian figure turning a large wheel. The logo “symbolized the ability to turn, stop and move forward,” Katayama said.

The show was outdoors, and spring rains turned the walkways into rivers of mud, but over half a million visitors attended the show. It was a rousing success.

Out of 267 vehicles were displayed, only 17 were passenger vehicles. The rest were commercial trucks, buses, and even construction equipment. That was the state of the Japanese economy at the time. Cars were still out of reach to ordinary people, but interest in the automobile had been ignited.