VIDEO: Even a shift to front-wheel-drive couldn’t slow down the Toyota Celica GT-S 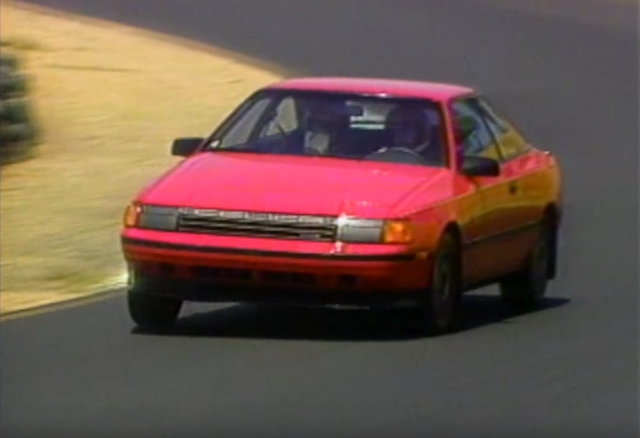 Looking back now, the Toyota Celica’s switch from rear- to front-wheel-drive may seem like a let-down. Back in 1986, though, FF was seen as modern and the fourth-generation Celica’s performance was affected by the shift. In fact, it continued to rank tops in its class of lightweight sports coupes.

In its review for the 1986 Toyota Celica GT-S, Motorweek had high praise for the little coupe. Testing it at Laguna Seca, they called it “positively enchanting,” and “a lot more stable at high-speed turns than anyone has a right to expect,” and in its own test course said it “maneuvers like an agile rear-drive car.”

The GT-S came equipped with Toyota’s naturally aspirated 3S-FE, a twin-cam, 16-valve 2.0-liter four making 136 horsepower and 125 lb-ft of torque. With a lively 6,800 rpm redline, Motorweek tested it from 0-60 in 8.7 seconds. That’s not shabby at all for the era. Plus, it had near-perfect, no-nonsense ergonomics in the cabin, and managed 23 city, 29 highway mpg. Lower-spec ST and GT models made do with a SOHC S-series shared with the Camry, making 97 horses and 118 lb-ft of torque.

Of course, the shift to front-drove was to further differentiate it from the Supra, now its own model, and to make way for Toyota’s all-wheel-drive Celica All-Trac/GT-Four competing in the World Rally Championships. The fourth-gen Celica is often overshadowed by its turbo 3S-GTE-powered homologation special, but the GT-S is deserving of classic consideration on its own.

The only shortcoming of its time was that at $12,000, it was hard to justify when an AE86 Corolla could be purchased at the same showroom for $1,000 less. Today, a clean Corolla GT-S is four to five times more expensive than a Celica GT-S, if you can even find one, so the Celica becomes a far more attractive proposition for your 80s Toyota needs.

permalink.
This post is filed under: Video and
tagged: celica, Motorweek, T160, toyota.

7 Responses to VIDEO: Even a shift to front-wheel-drive couldn’t slow down the Toyota Celica GT-S