VIDEO: The Toyota Camry Wagon is the quintessential family car 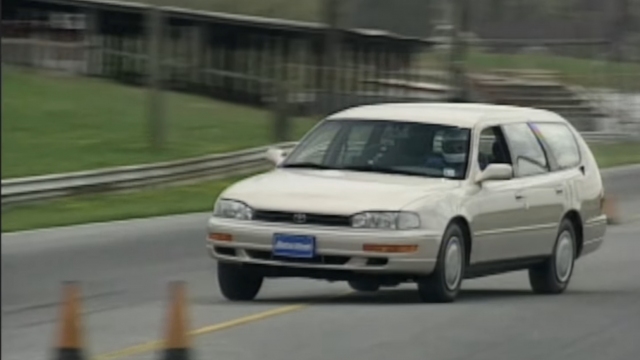 We hope everyone is having a good Thanksgiving. Holidays, family get-togethers, road trips. These are the domain of the station wagon, and what better steed for the occasion than the longroof version of the 1992 Toyota Camry? The third-generation clan carrier was one of the sleekest wagons to come out of the 90s, but this contemporary Motorweek review disagreed vehemently. Here’s how a Camry Wagon was viewed at the time of its launch.

It’s cute how Motorweek thought that in 1992, at the dawn of the SUV-pocalypse, that wagons were making a comeback. The were wrong about that, and also wrong about how ugly the Camry was. But even if you think it’s best to put bag over it, there are functionality advantages you can’t argue with.

It’s one of the last Japanese wagons offered in the US with a hidden, rear-facing third-row seat. When the second row folds down, the headrests even have a clever storage solution that doesn’t involve complex spring-loaded contraptions. It has dual rear wipers.

Driving-wise, the third-gen Camry is a surprisingly nimble city car and very comfortable highway cruiser. It’ll never be confused with a Miata, or even a similar-period Accord, but it has way more feedback than its modern equivalent. It’s sad such cars are no longer made. We would kill for a new car with such cargo capacity, visibility, and functionality.

3 Responses to VIDEO: The Toyota Camry Wagon is the quintessential family car