VIDEO: The Plymouth Colt showed what Mitsubishi was capable of at its peak 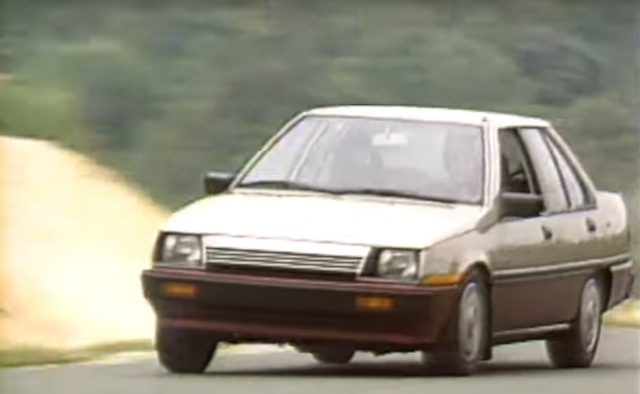 It’s no secret that Mitsubishi hasn’t been at its best in recent years. Back when it was firing on all cylinders and spinning all its silent shafts, its lineup was actually described as “terrific” and full of “show stoppers,” according to Motorweek. The crew from Owings Mills aren’t known as the harshest critics, but I think we can all agree that when adjectives like “stylish,” “slicked-up,” and “handsome” are used to describe even Mitsubishi’s lowliest entry-level offerings like the Plymouth Colt, the company must have been doing something right.

In fact, host John H. Davis voted Mitsubishi’s compacts the best all-around economy car for two years running prior to the release of the 1985 Plymouth Colt. Described as having an expensive look, the Colt has, somewhat unexpectedly, high-end options like a two-tone paint job, what looks like the most advanced manual-adjust seats on the market, and split rear seats (which Toyota’s top-of-the-line Cressida didn’t even have at the time). Motorweek describes the interior as looking like that of a concept car, and they’re not wrong.

For $6,500, you could get a base model with a 1.5-liter inline-four good for 68 horsepower. If you sprang $8,400 for the upscale Premier trim, then you got the 1.6-liter turbocharged mill good for 102 horsepower and an impressive, 122 lb-ft of torque. Mated with a 5-speed transmission, 0-60 times still languished in the 10-second range, but that was on-par with a Mercedes 190E of the era.

Sadly, we’d be shocked to learn a single one of these survived, whether in Plymouth Colt or its original Mitsubishi Mirage form. Given the positive review seen here, that seems like a real pity.

permalink.
This post is filed under: Uncategorized and
tagged: mitsubishi, Plymouth Colt.

5 Responses to VIDEO: The Plymouth Colt showed what Mitsubishi was capable of at its peak