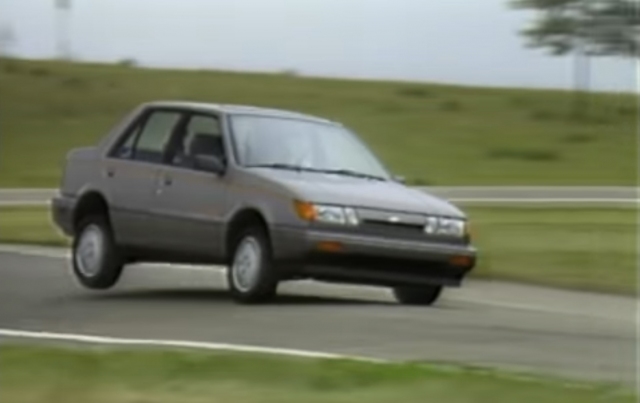 The 1980s were heady times. Even the smallest econoboxes coming out of Japan had sport-ified versions lavished with tech and gear that would have seemed at home on much higher-priced sports cars. Plus, both Isuzu and Suzuki were still operating in the US, and bringing these tiny, turbocharged compacts to our shores. Even if they were badged as a Chevy, they still offered loads of fun and personality for a rock-bottom price of entry.

In another Motorweek retro review, the public-broadcast car show tests a pair of captive imports badged as Chevrolets. The first is the Spectrum Turbo, which was also known as a second-gen Isuzu Gemini, as in the ones of dancing car commercial fame, or an I-Mark if you’re buying from Joe Isuzu.

In 1987, the Turbo model’s spooler bumped horsepower by a whopping 40 percent, to 105, giving it an as-tested 0-60 time of 8.8 seconds. That’s pretty impressive for a car of that size of that era and, combined with a sportier suspension, gave Motorweek reviewers good things to say about its handling. And this was before the “Handling by Lotus” magic was injected into the chassis.

It wasn’t just mechanical bits, either. Isuzu gave the cars unique paint and trim, like the charcoal gray metallic color with orange accents scheme of the test car. Inside, unique diagonal upholstery and special shift knob, and an eye-crossingly complex instrument cluster added a boost gauge as well. All for the low, low price of $9,700. 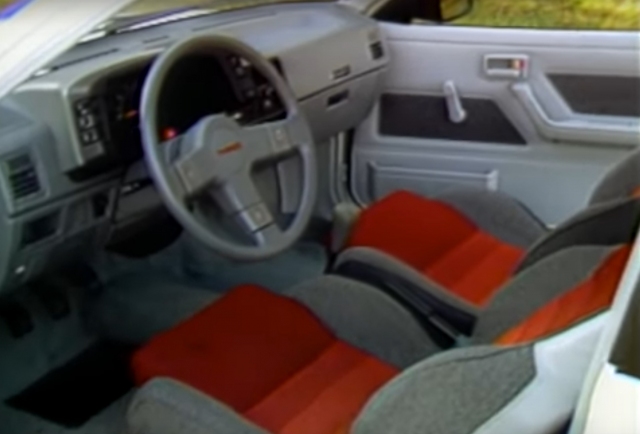 Slotting even lower than the Spectrum Turbo was the Sprint Turbo, which began life as a Suzuki Cultus (or Swift in the US). Toyota doesn’t plan to offer the turbocharged 3-cylinder of the GR Yaris in the US, but Suzuki didn’t hesitate to bring its 1.0-liter turbo three here 33 years ago. Here, the forced induction bumped output by 25 percent, to 70 intercooled horsepower.

That returned a 0-60 time of 9.5 seconds, which if memory serves, didn’t sound exactly blistering at the time, but impressed Motorweek nonetheless. It also returned 37 city and 43 highway mpg, for a starting price of $7,690.

Despite ranking lower on the lineup than the Spectrum, Suzuki’s trim was much snazzier. The Sprint Turbo came with a special color-matched body kit and mirrors, 80s white aero wheel covers, and an obligatory “Sprint Turbo” decal kit. The inside is where it really shined, with an added tachometer and sporty 3-spoke steering wheel with the word “Turbo”. The pièce de résistance, though, were the awesome gradient bucket seats not unlike the Recaro racing buckets that people pay out the wazoo for these days. The review describes them as hard, but who cares when they have that much style.

These days, it would be unthinkable for a company to offer two sports compacts at so close in size and output simultaneously. We’d be lucky to get even one, as GM has abandoned cars altogether to focus on the almighty crossover, SUV and truck market. It might be fun to drive one of these still today, but the plethora of unique trim piece means restoring one will be nearly impossible.