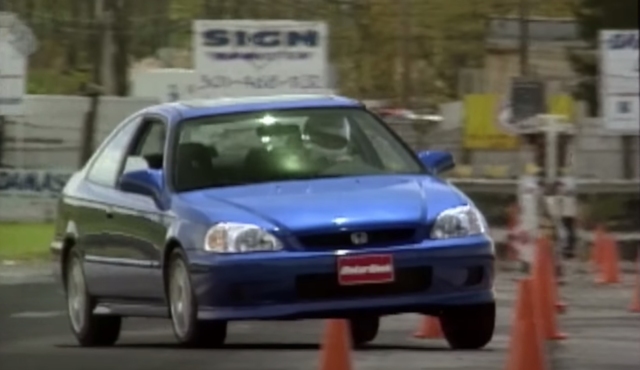 Ah, the EM1 Civic Si, a jewel among jewels. The brilliantly engineered performance variant of the humble sixth-generation Civic was peak Honda. When it debuted in 1999, magazine reviews were unanimous in their praise. The Motorweek take could have been all of them rolled into one, checking off every cliché in the process: pocket rocket, 90s hot rod, bang for the buck. Of course, they weren’t wrong.

On paper the Civic Si didn’t look that spectacular. Its 1.6-liter engine made 160 horsepower and 111 lb-ft of torque. Its 0-60 time was 7.6 seconds. For being a top of the line performance grade, its styling was downright tame compared to what base model cars look like today. Anyone who’s driven one, though, knows that the car was much more than the sum of its specs.

An upgraded suspension from more mundane Civic trim levels gave the Si impeccable handling. However, the basic double-wishbone geometry remained the same, proving just how insanely excellent the Civic was at that time. Most people who bought one for commuting to work probably never even realized what they had. The B16 engine didn’t need gobs of horsepower to be fun. Like so many of Honda’s engines, it was built to be wound up. From the time when VTEC activated to its 8,000 rpm redline it was an absolute riot.

Because it was a Civic, the EM1 wasn’t a rolling compromise. It had ample luggage space, excellent ergonomics, and started at just $17,860. Looking back, it was practically stealing from Honda. One only need look at the prices of what these Civics are going for today to know how desirable they are.

Turns out both sides had their blind spots. On the flip side, we fell compelled to mention that the Civic Si ran a quarter-mile in 15.7 seconds at 91 mph.  This was before drifting or time attack had made it big here, and import drag racing was still the most prominent form of motorsports involving cars like the EM1 — which misses the entire point of the Civic Si.

permalink.
This post is filed under: Video and
tagged: civic, EM1, honda, Motorweek.

4 Responses to VIDEO: The 1999 Civic Si was peak Honda