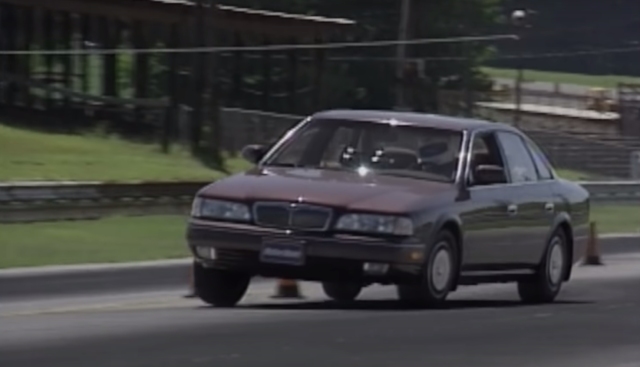 Fair or not, the Infiniti launch in 1989 will forever be remembered in the annals of automotive business history as a series of blunders. The name was weird and misspelled (this was decades before words like Google or Lyft could be names of multi-billion dollar companies). Television ads never showed the car. And when people finally did see the car, it shocked them with its Voldemort-like ugliness because it lacked a big fat chrome grille.

In the 80s Nissan, Toyota, and Honda all wanted to break into the highly profitable luxury car game. Toyota and Honda went with the more traditional route in terms of styling. Toyota took the most conservative approach, studying what buyers of European luxury cars wanted, then styled the LS400 exactly to those tastes. Nissan took a bolder approach, opting to make a splash by trying something new.

Unfortunately something new was not what luxury car buyers — you know, people with old school wealth and not tech millionaires and YouTubers — wanted in 1989, a time when ridiculously cheap leases programs hadn’t been invented yet. The Q45 was designed with Japanese minimalism in mind but it was, in the eyes of those customers, too austere.

So, in 1994 Infiniti capitulated and added a shiny-ass radiator fence to the front of the Q. Pre-nosejob cars also opted for a sportier interior that didn’t try to cover every surface with orange wood, but that changed as well. The steering itself was made less sporty as well, with a slower ratio in the rack. Ironically, today it’s the original 1989 Q45 that looks best to our eyes with the benefit of decades of hindsight.

It’s a pity that the Q45 was hobbled by its looks, because underneath the sheetmetal was an impressive car. Especially in Touring trim, they were one of the sportiest full-size luxury sedans you could buy in 1989. Handling-wise, they slotted between a Mercedes S-Class and BMW 7-series.

By 1994 the Q45’s base price had risen to $49.450. The Q45t started at $51,550, an apparent bargain when compared to the active-suspension Q45a, which rang in at $54,950. Sadly, even the change in looks didn’t reverse Infiniti’s fortunes because it pays to be first. Lexus had come right out of the gates with a bang, and the lead it built up with a proper offering is one of the key reasons why it’s mentioned today in the same breath as the Germans, while Infiniti dealers have to offer steep discounts.

permalink.
This post is filed under: News and
tagged: G50, infiniti, nissan, Q45.