VIDEO: The Lexus SC presented buyers with a difficult dilemma 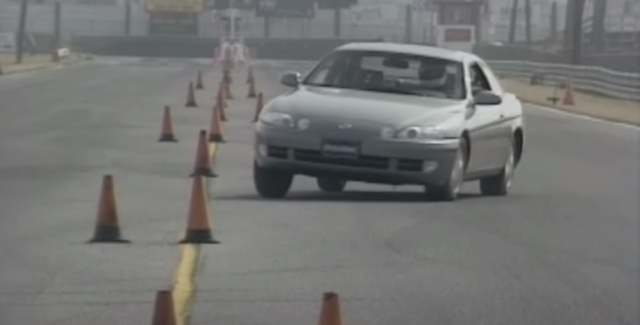 The Lexus SC is probably, to this day, still one of Toyota’s best-looking cars. It was the Supra you could take to the opera, built upon the same chassis that spawned the legendary JZA80, but grander, more civilized, and fitted with a sharper suit. However, the SC presented a vicious buyers’ dilemma. Go with the V8-powered but automatic-only SC400, or the manual-equipped but less powerful 6-cylinder SC300?

Both engines were gems. The SC400’s 1UZ 4.0-liter V8 was the same mill that powered the genre-breaking LS400. Its 250 horsepower and 260 lb-ft of torque were delivered so smoothly you could balance a tower of wine glasses on the hood, except the SC’s sleek bonnet precluded any of that tomfoolery.

The SC300’s straight-six was a naturally aspirated version of the renowned 2JZ. In tuned form the iron block could handle over 1,000 horsepower, but in the SC it barely broke a sweat dispensing a casual 225 horsepower and 210 lb-ft of torque. According to Motorweek‘s 1992 review it was made even quieter and stouter with resin-coated pistons and a metal head gasket.

With the manual, the SC300 put down a respectable 6.9-second 0-60 time in Motorweek‘s testing. Interestingly, a test of the SC400 a year earlier revealed a 0-60 time of — drum roll, please — also 6.9 seconds! So in essence you weren’t giving up much performance, if any, with the 5-speed SC300. You were just having more fun by rowing your own gears. Funnily enough, Motorweek also found that both cars returned the exact same fuel economy numbers, 18 city and 23 highway mpg.

Of course, with any testing done a year apart atmospheric differences can have an effect on the results. For what it’s worth Car and Driver tested both cars separately and found that the SC400 was a couple tenths of a second quicker to 60 mph than the SC300. We might have seen a bigger difference in performance if Motorweek had tested the SC400 in the quarter-mile. The SC300 took 15.4 seconds at 92 mph.

The rest of the review had nothing but good things to say about the SC. The only ding it received were some criticism about the leather seats being too slippery to hold the driver during hard cornering. We can’t find fault with their assessment. Time has only further confirmed that the SC was an all-around superb machine. We would have — and did — choose the manual SC300. Which powertrain would you have chosen?

permalink.
This post is filed under: Video and
tagged: lexus, soarer, toyota, Z30.

11 Responses to VIDEO: The Lexus SC presented buyers with a difficult dilemma