VIDEO: Watch the Isuzu Trooper take a slalom without rolling over 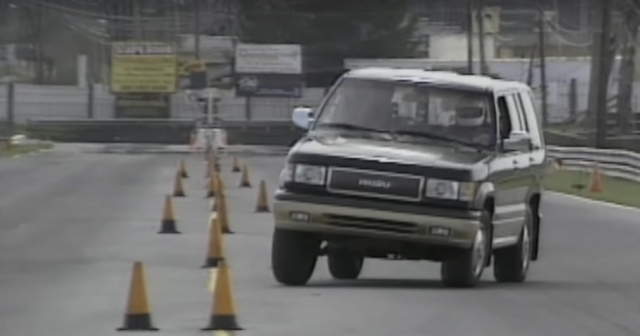 In the 90s at the dawn of the SUV takeover, truck-based people haulers were trying to move upscale while still retaining their off-road cred. Also, Isuzu still existed as a purveyor of passenger vehicles. Their entry into the segment was the second-generation Trooper (or Bighorn, Jackaroo, Horizon, or Monterey depending on which country you lived in).

Isuzu’s all-new second-gen Trooper replaced the ancient first-gen after a 10-year run. Central to the revamp was an Isuzu-designed V6 (the first-gen was offered with a GM V6), displacing 3.2 liters and generating 175 horsepower and 199 with single cams, or 190 horsepower and the same amount of lb-ft in twin-cam setup.

In a Motorweek review of the 1992 model, the Trooper gets praise for trick features like auto-locking hubs and split barn doors accessing the cargo area. However, it gets docked points for lack of a shift-on-the-fly 4WD mode and some questionable interior ergonomics. Namely, some of the switches are hard to see and the optional CD player is separated from the head unit by the climate controls. The staff, though, shows their refined tastes by tuning the stereo to WHFS, which happens to be playing some Siouxsie Sioux during the filming.

Famously, the Trooper — and its Acura SLX badge bro — were marked for death by Consumer Reports‘  “Not Acceptable” rating for its tendency to roll over during hard cornering. The debacle resulted in a lawsuit by Isuzu. The jury was split, and some jurors found some of Consumer Reports‘ 17 statements to be false, but it wasn’t enough for the court to award Isuzu any damages, and the company claims that altogether it cost them $244 million. For the record, Motorweek keeps the Trooper on all four wheels during their slalom test.

A base Trooper S model started at $18,800, which is about $1,000 more than a base Mitsubishi Montero of the era, but nearly $7,000 cheaper than a contemporary Toyota Land Cruiser. An LS model rang in at $24,250. That made the Trooper a pretty good deal, though one could argue that their long-term durability didn’t match that of the bulletproof Toyotas.

These days, whereas good-condition Land Cruisers are selling for practically what they cost when new, Troopers can be had for a couple thousand bucks. That makes them cheap enough for some pretty mad engine swaps.

permalink.
This post is filed under: Video and
tagged: isuzu, Trooper.

6 Responses to VIDEO: Watch the Isuzu Trooper take a slalom without rolling over