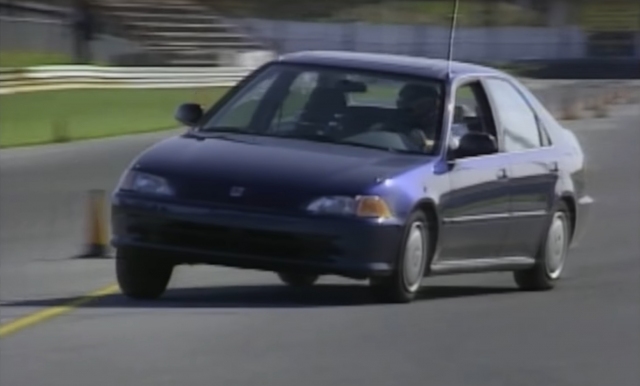 History has taught us that the EG Civic was one of the greatest compacts of all time, but how was it reviewed when it was new? Surprisingly, it wasn’t for the things we love about 90s Hondas like responsive engines, race car engineering filtered into a humble compact, and stone cold reliability. Instead, it was a bunch of boring things that, 30 years later, no one cares about.

Motorweek tested two Civics back when the EG generation debuted in 1992, a VX hatch and EX sedan. It’s praised for its comfortable seats, ample legroom and smooth ride that “rivals some luxury cars’.” The advanced double-wishbone gets some handling praise, but then is dinged with vagueness at high-speed turn-in. Further complaints include trunk space, abrupt clutch engagement, and a climate control that didn’t work smoothly, whatever that means.

The VX hatchback was the fuel miser, spiritual descendant of the CRX HF. It had a high-tech 1.5-liter multivalve engine, its VTEC system was tuned for fuel efficiency. Combined with a lean burn head (except in California), it produced 92 horsepower while delivering 48 city, 55 highway mpg. Its 0-60 time was 9.6 seconds and it ran the quarter-mile in 17.5 seconds at 77 mph.

As it turns out, import racers would soon whittle that down quite a bit. The Civic was a versatile and infinitely tuneable platform that helped create a new generation of hot rodders with a car that even mom and dad would be proud of. The hatch started at a very competitive $8,000, or $10,000 for the tested VX, while the sedan started at an utterly reasonable $10,500, or $13,575 for the EX tester. What’s not to like?

4 Responses to VIDEO: What made the 1992 Honda Civic a good car?