VIDEO: The Mazda 323 Protegé LX was good, but not Honda Civic good 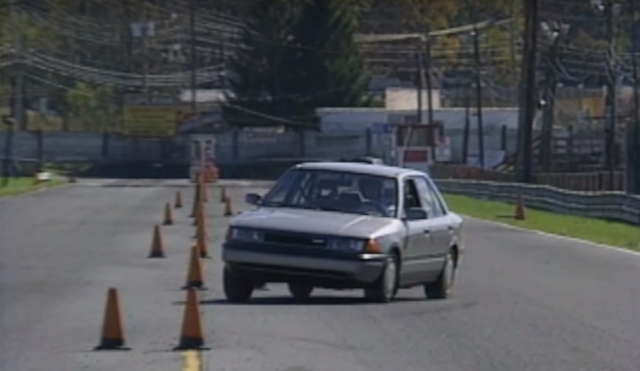 Poor Mazda. Even though they typically make great cars that should sell far better than they actually do. This was even true in the late 80s, when the well-reviewed sixth-generation BF 323 was completely overshadowed by, as Motorweek found, by its Japanese competitors. Sure, okay, maybe it was hard to argue against taking the 323 over a Honda Civic, but even the Mitsubishi Mirage got higher marks. So, for the seventh-generation BG 323, Mazda came out with guns blazing.

For 1990, the all-new 323 — now with the word Protegé and a fancy accented “e” attached to the name — had the same footprint and wheelbase as a Civic, but offered more interior room than Honda’s compact. Or the Toyota Corolla and Mitsubishi Mirage, for that matter. That meant 6-foot-plus passengers could ride in relative comfort in both front and rear seats while enjoying the long list of standard features.

Mazda’s trim levels were kind of annoyingly incongruent. Base models were called SE, like Nissan’s sporty grades, while top-spec models were called LX, like Honda’s middle grade. Nevertheless, with a $9,339 base price for the former and a $10,549 starting price for the latter, it was a pretty competitive price. A Honda Civic EX would set you back $11,145.

With the LX, lavish options like power steering, power windows, and power mirrors came standard, as did 4-wheel disc brakes and a 40/60 folding rear seatback. The LX’s DOHC 16-valve 1.8-liter inline-four offered 125 horsepower, 22 more than the SOHC SE. The 1.8 was shared with the later NA MX-5, and came with the B6/BP8 valve cover that is a popular swap for Miata owners.

Mated with a 5-speed stick — man, we’d give our left arm to have a modern manual as ungraceful as that accordion shifter — 60 mph arrived in just 7.8 seconds from a standstill. That was a pretty impressive time for the era, especially on a compact four-banger. Motorweek experienced an oddly high friction point for the clutch pedal, but considered it a possible glitch with their particular test car.

The 323 Protegé also got praise for its smooth engine and sharp, stable handling thanks in part to front and rear sway bars. It got dinged for its road noise — nothing a new set of tires couldn’t fix. It also got a respectable 25 city, 30 highway mpg rating.

However, despite its positives, it was still difficult to recommend a 323 over Honda’s stellar EF Civic, even though it was actually an older design. It was hard to top the Civic’s incredible low cowl design and excellent engine matched with an unthinkable-for-a-compact double wishbone suspension. The EG generation Civic that would debut mid-way through the BG 323’s lifespan was even better. Mazda also had stiff competition with the E90 Corolla that was new and vastly improved for 1989.

That doesn’t mean the 323 deserves to be forgotten on the scrapheap of history. It was a well-appointed, roomy sedan with good handling. The very fact that the Civic and Corolla were far more popular only means we’d be more excited to see a well-kept 323, especially one of the rare AWD sedan models that were offered through 1991. If you know any to exist, AWD or not, let us know.

permalink.
This post is filed under: Video and
tagged: 323, mazda, Motorweek, protege.

2 Responses to VIDEO: The Mazda 323 Protegé LX was good, but not Honda Civic good