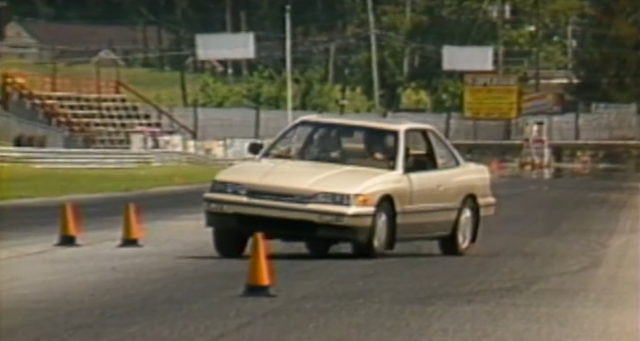 Lexus and Infiniti might wear the Japanese VIP crowns today, but in 1986 Acura was the first to challenge the idea that a luxury car could come from Japan. The Legend was loaded with features like leather, automatic climate control, and premium stereo, and gave buyers who wanted luxury without the European price tag a fresh new alternative. And yet, the notion of nearly $29,000 Honda was unthinkable to most Americans at the time.

The Legend sedan’s strong debut was followed by the Legend Coupe in 1987. The Germans had such a lock on the luxury market that everything was measured by the bars BMW and Mercedes had set. The front-drive Legend doesn’t quite reach them in Motorweek‘s 1987 review, but it gets pretty close.

The 24-valve, 2.7-liter V6 makes 160 horsepower and 162 lb-ft of torque, which was good enough to return a 0-60 time of 9.0 seconds with an automatic transmission. The Legend’s high-velocity handling and anti-lock brakes are highly praised, though they say the power steering feels overboosted at low speeds. Some might say speed-sensitive steering is a plus, though. Car and Driver did, and put it on its 10 Best list three times from 1988-1990.

$28,688 was a lot back then, but what the video didn’t mention is that the Legend had as standard most luxury features that cost extra on European cars, making it a tremendous value. Little did anyone know that a $40,000 Toyota was coming next.