MOTORSPORT: Nissan puts the “LM” back in GT-R 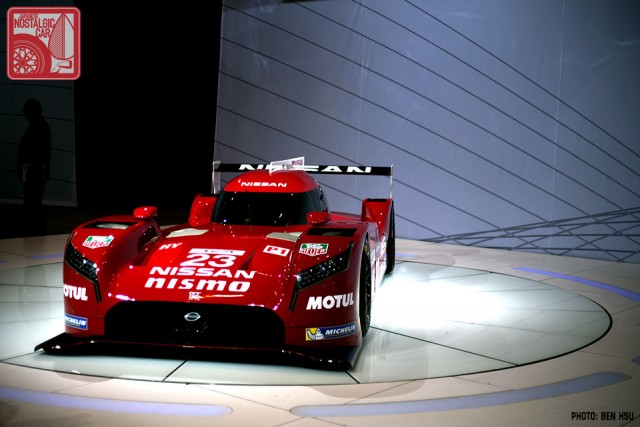 JNC owners, myself included, love to spout on about the superiority of rear-wheel-drive to anyone that will listen (and many whom won’t). Nissan wants to prove all of us wrong with a front-wheel-drive GT-R. No, that is not a typo. The latest evolution of the legendary GT-R name is driven by the same wheels as a Honda Civic.

Announced last year on May 23, (the numbers 5/23 are pronounced “Go Ni San” in Japanese), the 2015 GT-R LM NISMO promised to pay tribute to the hallowed GT-R name. Nissan even released a teaser showing the GT-R’s trademark staggered quad taillights. 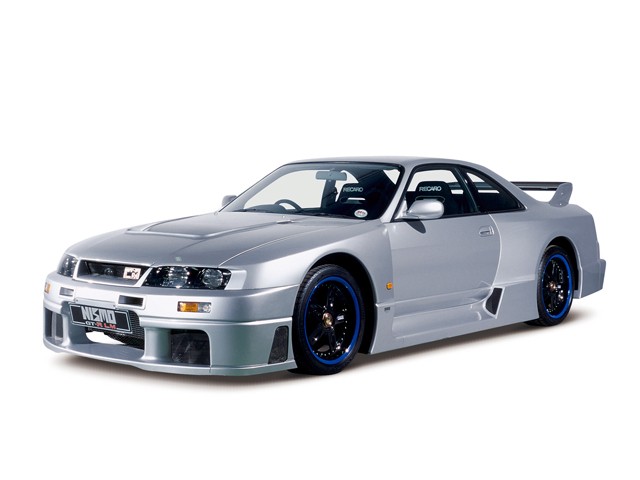 The last GT-R to receive the “LM” moniker was the NISMO GT-R LM R33, which competed twice at Le Mans in 1995-96 and placed as high as 5th in the GT1 class (10th overall). Also, it spawned one of the most insane and rarest road cars Nissan has ever built. 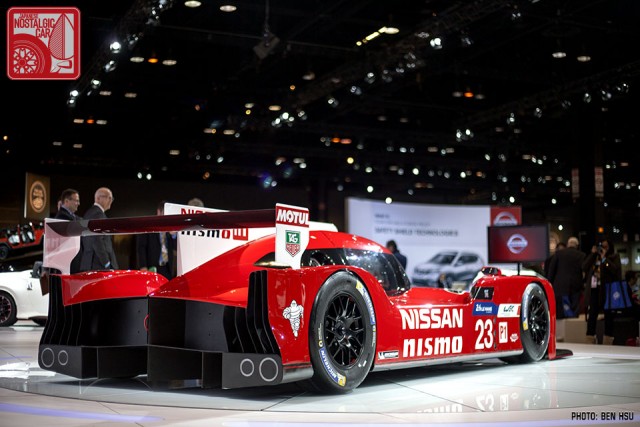 The public finally got to see the new GT-R LM NISMO at the Chicago Auto Show this month, where it was immediately dubbed the “Red Batmobile.” You might think it looks nothing like any GT-R that has come before it, and you’d be right. 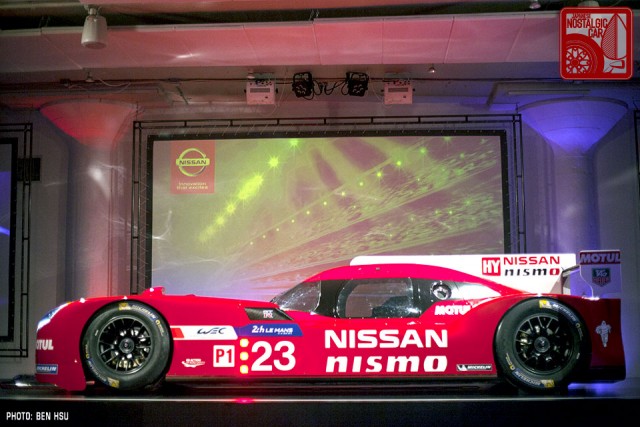 Of course, top-spec prototype class racers never look anything like road cars, but this doesn’t even look like any of Nissan’s other Le Mans cars. 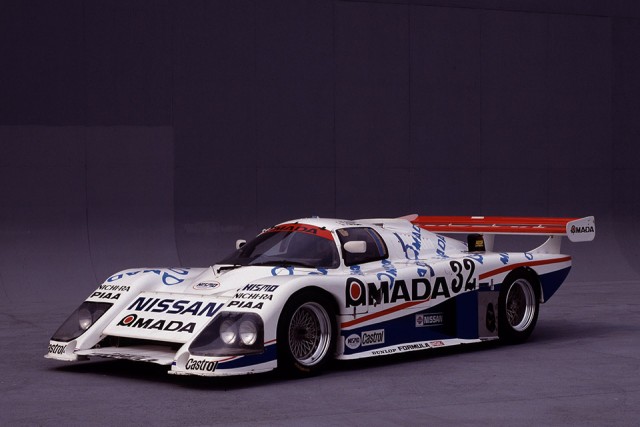 Nissans’s first go a Le Mans took place in 1986 with the R85V and R86V. The former had been raced in Japan’s domestic JSPC Group C series for a year, and with its bugs shaken out, managed a 16th overall finish. The newly developed R86V, powered by a VG30 engine tuned to 680PS, retired just five hours into the race. 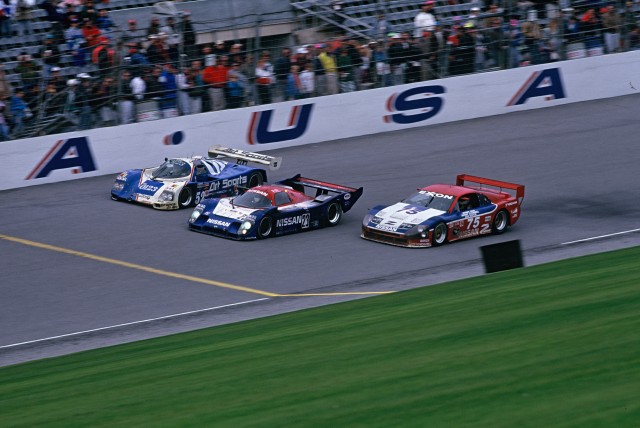 Over the next decade, Nissan developed ever quicker and more advanced prototypes. Due to conflicts with regulations, Nissan briefly turned its attention away from Le Mans towards the 24 Hours of Daytona and quickly racked up an overall win with the R91CP in 1992. 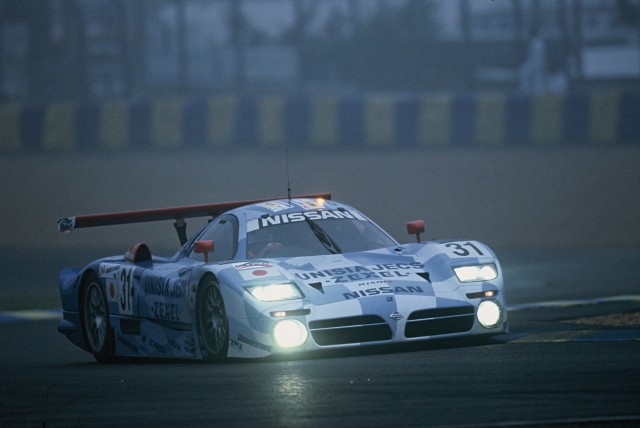 Soon Nissan headed back to Le Mans, but the closest it came to winning was in 1998 with the R390 GT1. Nissan called it the “grand sum of all its Le Mans efforts thus far” and instead of its traditional black-and-red or red-white-blue tricolore livery, it went with a checkerboard patter representing the checkered flag it expected to snag. 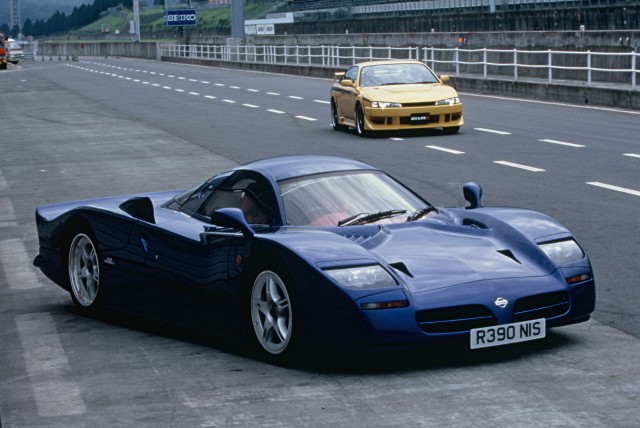 Once again, overall victory eluded the Nissan team, but all four R390 GT1s finished, with the lead one placed as high as third. Also, it spawned the most insane and rarest road car Nissan has ever built. 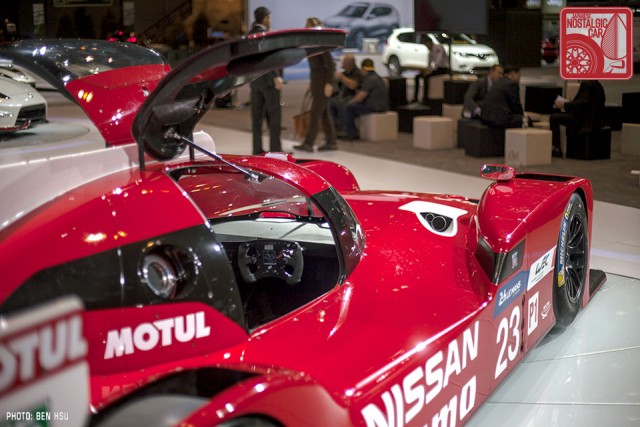 So, back to this whole front-wheel-drive thing. You can tell right away because the front tires are 14 inches wide while the rears are only nine. We suspect part of the FWD announcement was created to specifically create buzz. 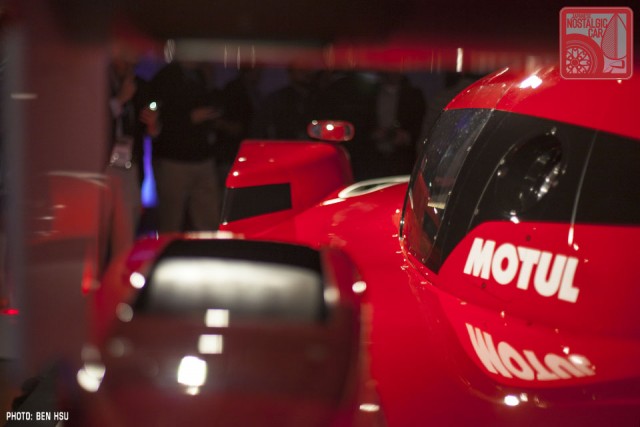 That’s because while this particular car at the Chicago Auto Show was configured only to run via the front wheels, as it turns out the rear wheels can be configured to run off of two electric motors, turning it into AWD. They’re not just holding the butt up. 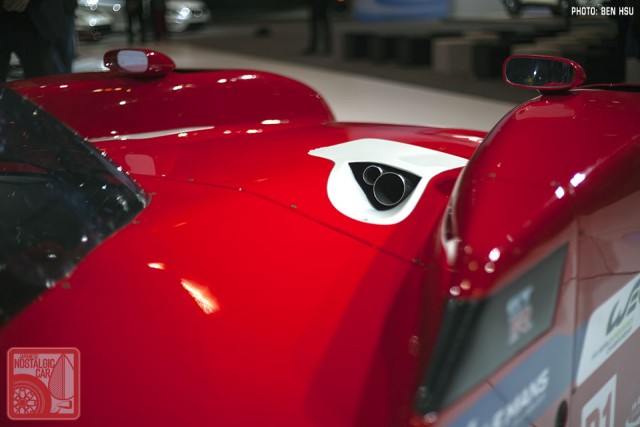 The 1,250-hp engine is longitundinally mounted, turned around so that the flywheel is at the front. Two pairs of exhaust ports spit hydrocarbons and flames right past the driver’s head, encased in a Lexan bubble. 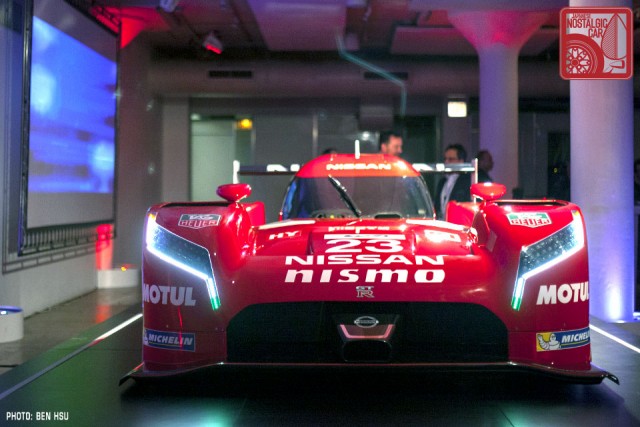 The designer behind this madcap creation is Ben Bowlby, a man considered a genius of race car engineering. According to Nissan spokesmen, the man can digest an FIA rulebook and spit out the optimal race car like a computer. He’s also the guy who built the Nissan Deltawing. 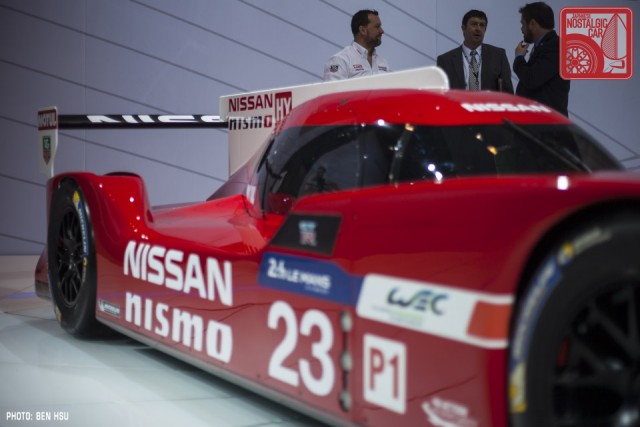 Of course, that hasn’t stopped every armchair engineer on the internet from crying that Nissan doesn’t understand physics. But Bowlby is no dummy, and has fashioned the entire back half of the car to be one enormous downforce-generating wind sucker. 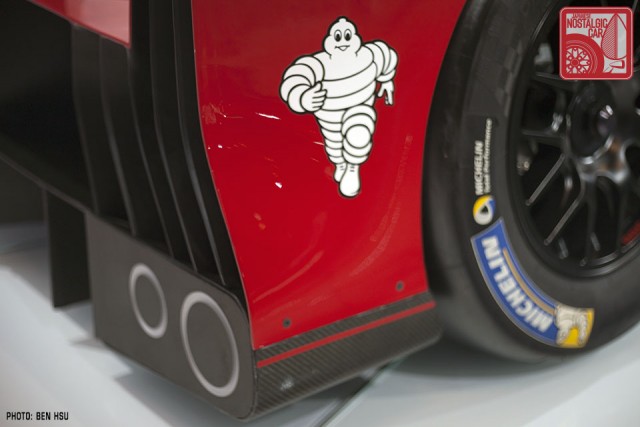 There was one other reference to an old Skyline, so subtle that it was possibly entirely inadvertent. Up close, on a tiny sliver bodywork where uncovered carbon-fiber looks like it’s trying to recall the KDR30 Skyline Silhouette. 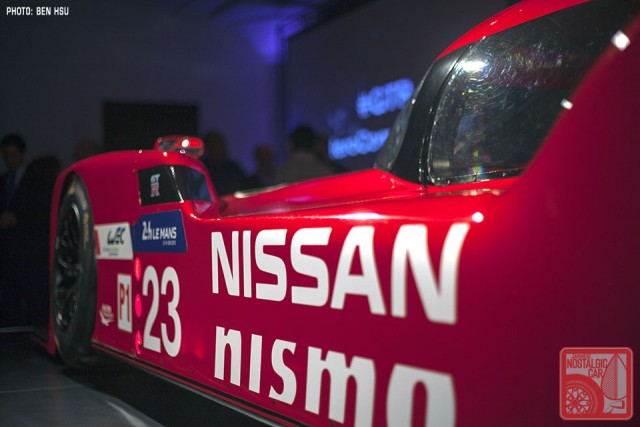 As is custom with all their most ambitious international race efforts, Nissan has given the GT-R LM NISMO the number “23,” a reference to the Japanese pun of “two-three” pronounced as “ni san.” We shall see when the 24 Hours of Le Mans kicks off Jun 13.

14 Responses to MOTORSPORT: Nissan puts the “LM” back in GT-R