MOTORSPORT: How the Datsun 510 revolutionized sedan racing in America 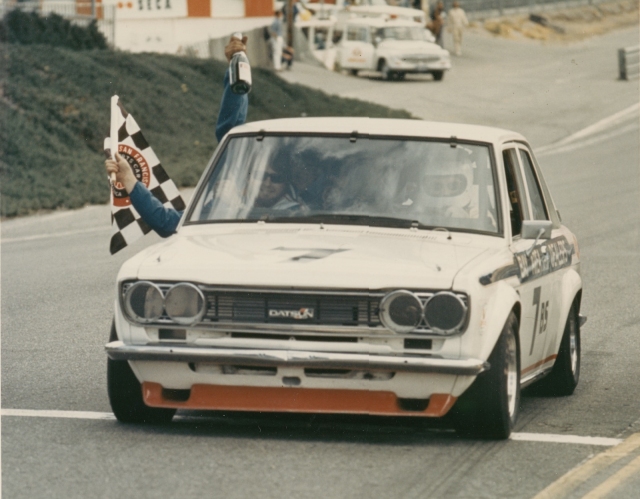 The Datsun 240Z is rightfully remembered as Nissan’s most competitive sports car, for sweeping 10 out of 10 National SCCA C-Production Championships between 1970 and 1979. However, the humble Datsun 510, initially expected to be nothing more than an econobox when first released in 1968, nearly matched that record in what was then called sedan racing. What’s more, it truly opened the doors for Nissan and other Japanese manufacturers to be taken seriously as competitors against their European rivals.

Back in the day, sedan racing didn’t necessarily mean a car with four doors. The term “sedan” was used to differentiate Mustangs, Porsches, and Alfa Romeos from more purpose built prototype and sports cars that were the more traditional racing machines of the era. Notably, sedan classes featured cars based on modified production vehicles. The true charm of sedan racing was the way regular fans could relate to the cars, the same ones they could buy in showrooms.

By the late 1960s, the SCCA had fast growing amateur A- and B-Sedan racing classes. With the popularity and affordability of sedan racing on the rise, carmakers saw a tremendous opportunity to move some metal. In 1966, SCCA president John Bishop founded the well-known Trans-American Sedan Championship, a professional series created as playground for manufacturers to prove their cars on the race track (and to rake in their sponsorship dollars). 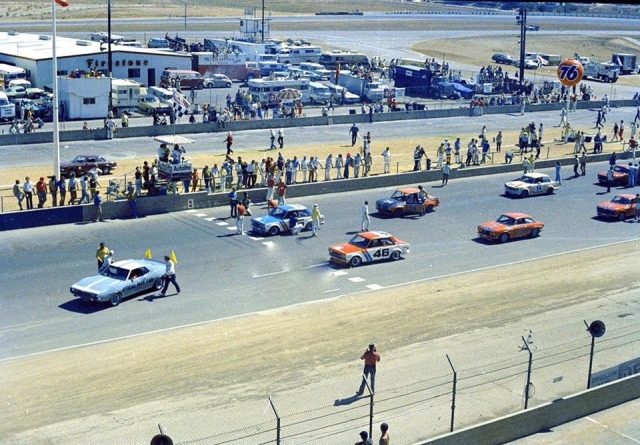 When we think of Trans-Am racing today, the historical provenance of what was initially called the “Under 2.0 Liter” class is often overlooked. The series was formed at the dawn of the pony car era, and these smaller cars ran at the same time as the V8-powered Mustangs, Camaros, and ‘Cudas, with hotshoe drivers like Parnelli Jones, Mark Donohue, and Dan Gurney, getting the bulk of the attention.

Under 2.0 Liter was where Nissan, and eventually Japanese carmakers in general, would dominate. But in the beginning, the class was filled with European cars from the likes of Porsche, Alfa Romeo, Mini Cooper, BMW, Saab, and Volkswagen. 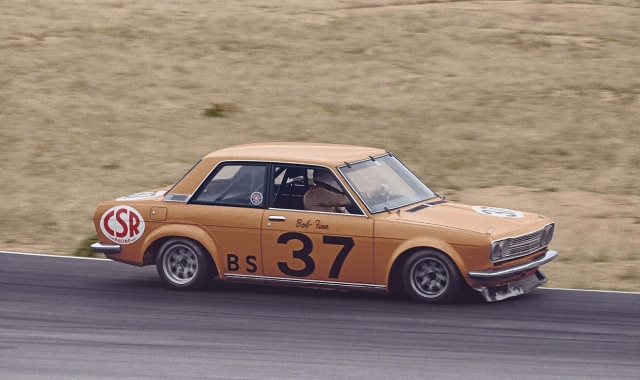 Meanwhile, Nissan had been dominating SCCA’s many amateur production classes from coast to coast, but had yet to enter any major professional series with factory backing. The president of Nissan USA, Yutaka Katayama, saw the SCCA’s increasingly popular Trans-Am series as the perfect opportunity to showcase the Datsun 510 could hold its own against the likes of their European counterparts.

Katayama offered contracts to two proven teams, Brock Racing Enterprises on the west coast and Bob Sharp racing on the east. And in 1971 Nissan officially entered Trans-Am racing as a manufacturer, into the highly anticipated and newly reclassified “Two-Five Challenge” for engines 2.5 liters and below. With the new name came a dedicated race group separate from the pony cars. 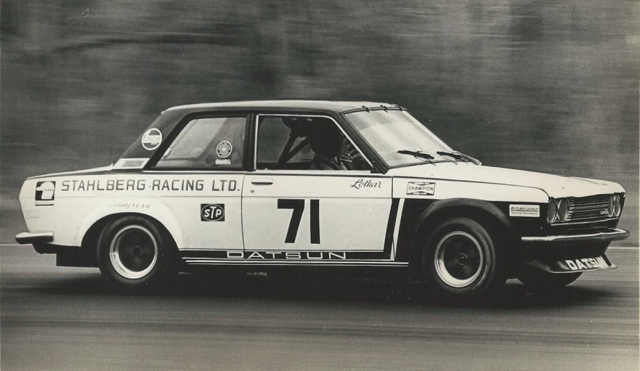 Brock, Sharp, and their drivers would eventually become household names to car enthusiasts of the era, but there were countless other drivers and privateer cars that helped build he Datsun legend. In fact, the BRE team cars weren’t even ready in time for the first Two-Five Challenge race on May 8, 1971 and had to sit that round out. Instead, Datsun was represented by John Tremblay, a privateer, and Bob Sharp, finishing 7th and 8th respectively. Nissan won no manufacturer points that round, it was the first time competitors saw potential of the 510, cracking the top ten.

It was not until the second race of the season, at Bryar Motorsports Park on May 31, 1971, that BRE entered John Morton’s No.46 510 for the first time alongside Bob Sharp’s No.33 and privateer Lothar Stahlberg’s No.71 510. Morton was the fastest qualifier and had a 40-second lead when mechanical problems resulted in a retirement. That gave Lothar Stahlberg of Utica, New York, an active participant in amateur SCCA B-Sedan, the very first manufacturer’s championship point for Datsun in the US. 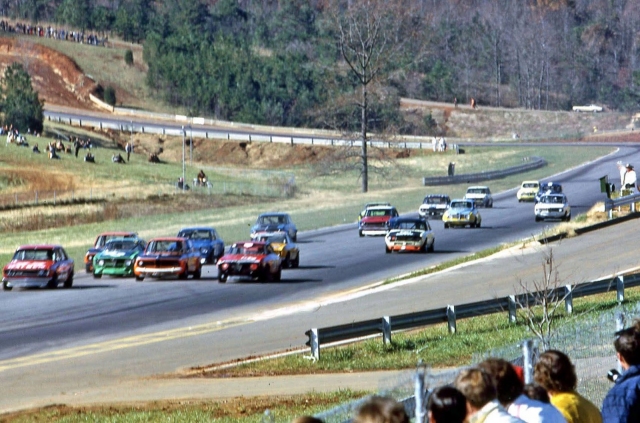 The rest is history. John Morton went on dominate and win eight of the remaining ten Trans-Am races, taking the Manufacturers Championship. At that year’s Runoffs, the season-closing Superbowl of the SCCA, Stahlberg finished a respectable 6th, while Bob Sharp finished 1st and was crowned National B-Sedan Champion. The Datsun 510 had arrived.

The old adage of “Race on Sunday, sell on Monday” rang particularly true in this era. Customers began flocking Datsun dealerships for the championship winning Datsun 510, 240z, 1200, and Roadster. But perhaps the even greater impact was how winning the Two-Five Challenge Manufacturers Championship motivated everyday amateur club racers to shift over to the Datsuns the following year.

In 1971, the B-Sedan grid at the season-ender SCCA National Runoffs grid included five Datsun 510s in a field of 18 cars. By 1972, the Runoffs grid had twelve Datsuns in a field of 20. With more racing minds surrounding the platform came more success. Datsun 510s occupied four of the top five finishing spots that year, with Bob Sharp claiming his second National B-Sedan Championship. He was followed in a close second by Walt Maas, and Jim Fitzgerald (Bob Sharp Racing’s second driver) finished third. Lothar Stahlberg bettered his prior year’s result with the fifth spot, all in Datsun 510s. 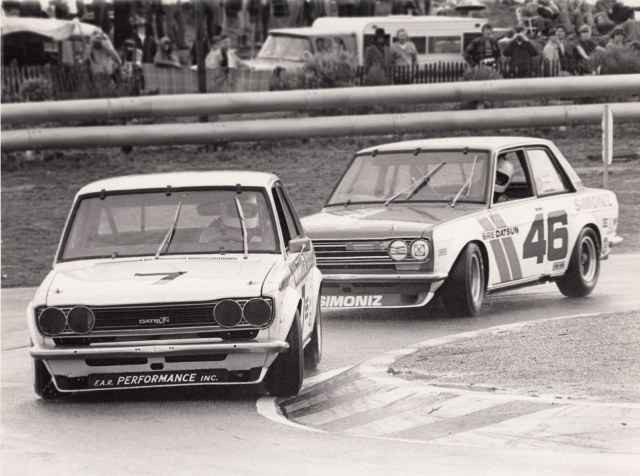 Datsun’s success opened the doors for Toyota as well. Represented in the lineup by a pair of Toyota Corolla 1600s, their highest finish was in 10th place.

In professional racing, Datsun’s rapid dominance was even more stark. BRE would continue to dominate in 1972, winning 9 of the 11 races on the schedule. At the Manufacturers Championship in 1971, there were 10 Datsuns competing. By 1972, there were 21. That year brought Toyota in on the pro side as well, with four Corolla 1600s. Vic Matthews achieved Toyota’s highest finish, third place at Road America on July 16, 1972. 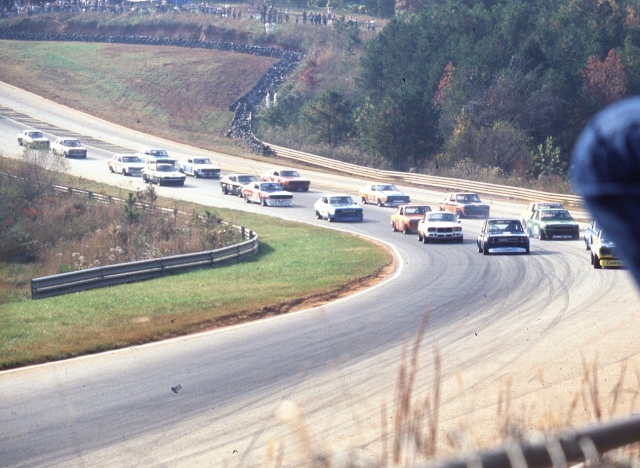 As the decade went on, Nissan campaigned championship-winning Datsun from across their lineup. There was Bob Sharp and Elliot-Forbes Robinson in 610s, David Frellsen in a 710,  and Bill Coykendall in a 200SX (S10 Silvia). The years spanning 1971 to 1979 are largely considered the golden era for SCCA production car racing. In them, Datsun sedans won eight out of nine B-Sedan National Championships. The only exception, 1977, saw Stuart Fisher snatch the trophy in a Mazda RX-3.

In 1971, there were only five Datsun entries at the B-Sedan Championship race at Road Atlanta. By 1978, a record twenty Datsuns, two Toyotas, and one Mazda occupied a grid of 24 cars. The only non-Japanese car was a lone Alfa. In just a few years, the Datsun 510 had transformed the American sedan racing landscape forever.

13 Responses to MOTORSPORT: How the Datsun 510 revolutionized sedan racing in America