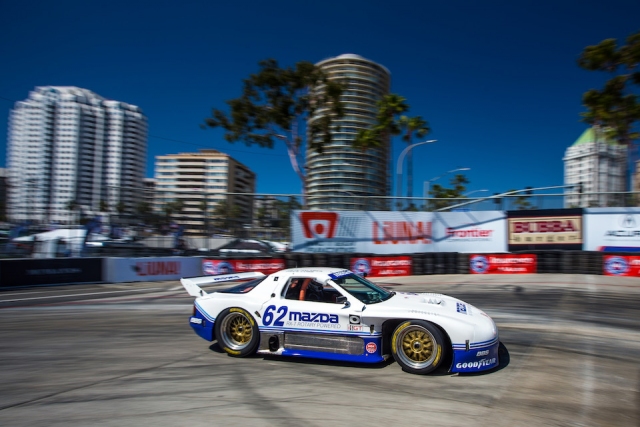 Mazda has been a dominant force in IMSA since the original 1979 RX-7 won its class at the 24 Hours of Daytona in its debut year. As our resident vintage racer Glenn Chiou mentioned in his recent piece, much of IMSA’s formative and most-watched years were dominated by Japanese marques, especially Datsun and Mazda, joined later by Toyota. Today, though, only one of these companies remain active in IMSA with a factory effort, and that’s Mazda. 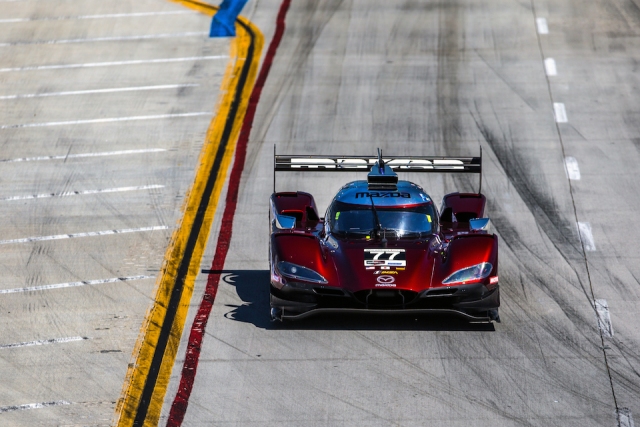 Despite the Hiroshima company’s small size, it consistently boasts that on any given weekend in America, there are more Mazdas racing than any other marque. That’s in large part thanks to the Miata — a favorite of grassroots racers — and the company’s support of the Spec Miata series. In big leagues of America’s premier road-racing series, however, Mazda fields just two RT24-P prototypes. 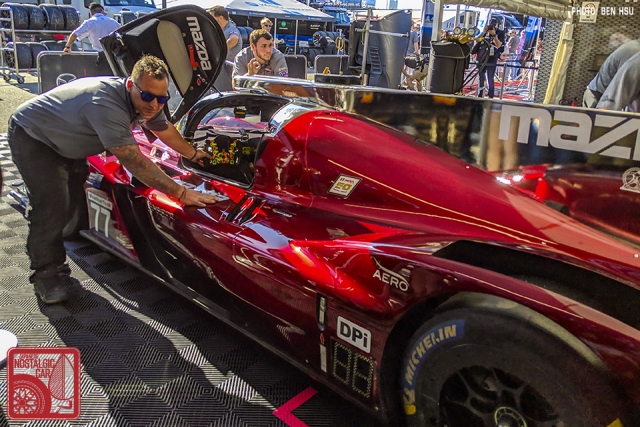 At the recent Long Beach Grand Prix, one of two remaining courses on the IMSA calendar that is raced on actual roads, we were able to get a closer look at Mazda’s racing efforts, including a tour through Mazda’s paddocks, a round of the IMSA WeatherTech SportsCar Championship, and a historic IMSA race with Mazda’s four-rotor RX-7. 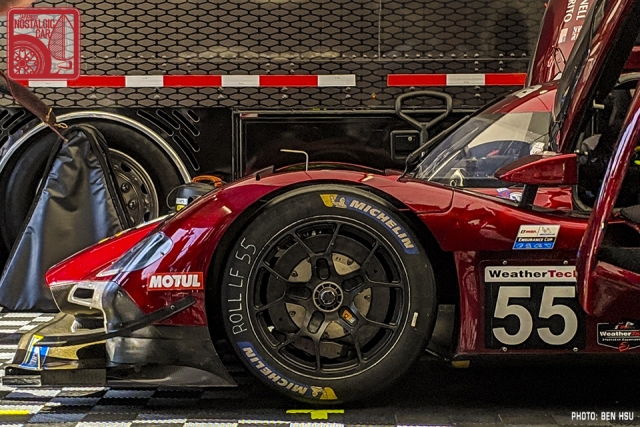 The RT24-P is named after Mazda’s Road to 24 program that helps develop young drivers. The number 55, of course, is very significant to the company, as it is the same number that graced the 24 Hours of Le Mans-winning Mazda 787B. Mazda has been running 55 for decades, and in Japanese “five” is, fittingly, pronounced go. The second RT24-P is numbered 77. Why? “Just because we like the symmetry,” a team member told us (we thought it might have been a Batman reference). 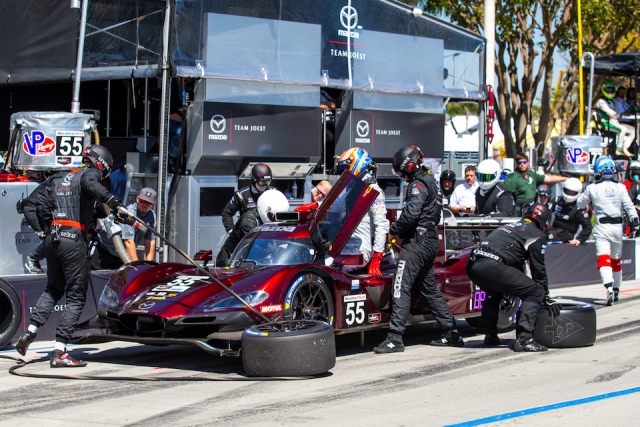 Starting in 2017, Mazda has allied with Team Joest Racing to manage the IMSA campaign. Before that, Joest oversaw the operations of other factory racing teams such as Porsche and Audi. By comparison, Mazda’s motorsports budget seem like a puddle to their oceans, but even so the program is astronomically expensive. 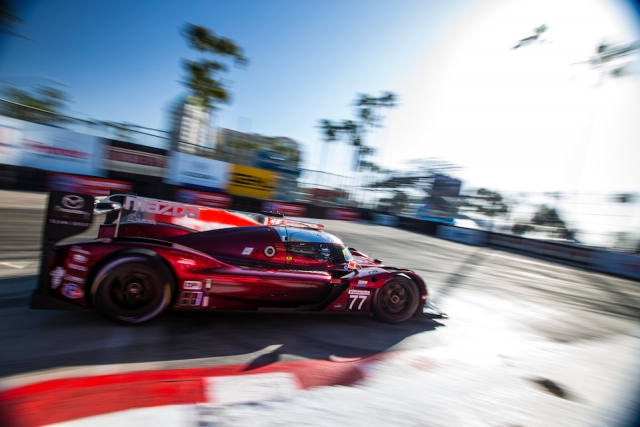 Each car runs a carbon fiber tub and chassis engineered by Riley Technologies to strict IMSA specifications. The bodywork attempts to integrate as much of the Kodo design language seen on Mazda’s street cars as possible while still maintaining good aerodynamics. The cars are finished in a wrap approximating Soul Red Crystal, Mazda’s trademark color, though because it’s a wrap the shine isn’t as deep as that of a three-step paint process. Also, sadly, this branding has allowed Juncos Racing to usurp the green and orange livery for a Cadillac. 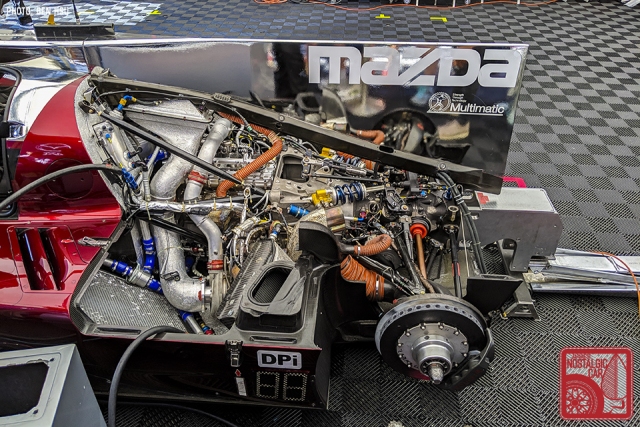 Each car is powered by a 2.0-liter turbocharged four-cylinder engine generating approximately 650 horsepower. That’s basically what the quad-rotor RX-7 IMSA GTO car puts out, but the car weighs just 2,050 pounds dry. And because its aerodynamics generates 3,000 pounds of downforce, the car can theoretically drive on the ceiling of a very long tunnel. Most of the air sucked into the car helps cool the engine, winding and traveling a total of 29 feet inside the car before it reaches the motor. 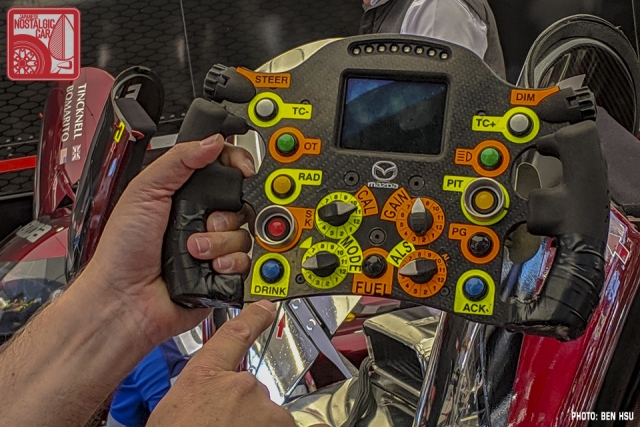 The steering wheel, which looks like the world’s most complex PlayStation controller, is your typical racing unit, that allows the driver to do everything from paddle shift to dispense a Pedialyte-laced beverage. It also costs $50,000 each, the same as each brake job. 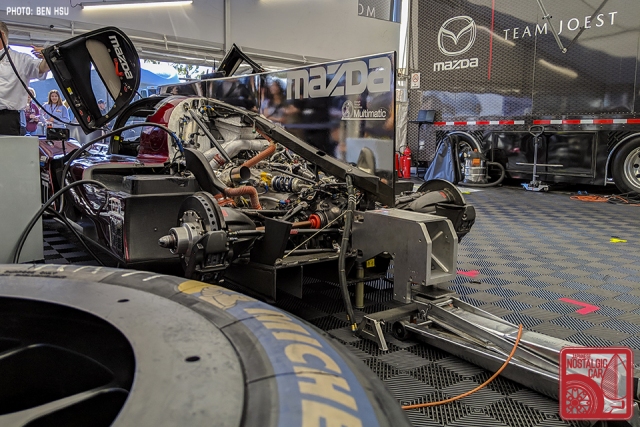 In qualifying, one of the cars had smacked a wall, damaging the carbon fiber tub. On the day we toured the paddocks, the team had worked through the night swapping everything off of that chassis and putting it on another. It’s a mind-bogglingly costly venture. 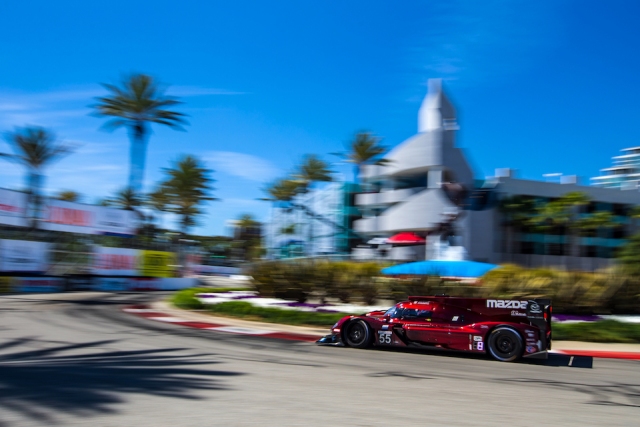 Nissan no longer has a factory supported team, choosing instead to funnel their motorsports budget to Formula E, though there is one privateer team campaigning a Nissan Onroak DPi, For over four decades, Toyota sponsored the Long Beach Grand Prix as its hometown event, but starting this year they no longer do so after a headquarter relocation from Torrance, California to Plano, Texas. 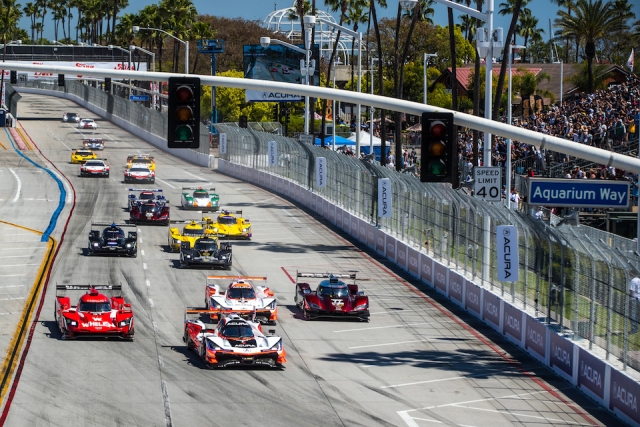 Instead, Acura has taken the place of title sponsor, contributing a fleet of NSX pace cars in the process. In fact, it’s the only other Japanese carmaker to mount a factory effort, campaigning two ARX-05s a white and orange throwback livery to the RealTime Racing Integra Type R, NSX and TSX cars that once wore those colors. 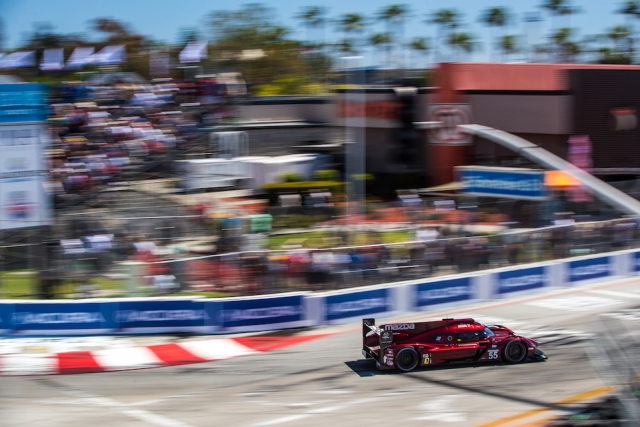 The Long Beach Grand Prix is a southern California institution, a west coast Monaco if you will. As a street circuit, the race is run on closed-off public roads, with all their imperfections and tight turns. In fact, if you’ve attended Toyotafest or JCCS at their new location, you’ve crossed the start/finish line before entering the show. Prior to the race, all the manhole covers are welded down, because the vacuum created by the cars will suck them right out of the street. 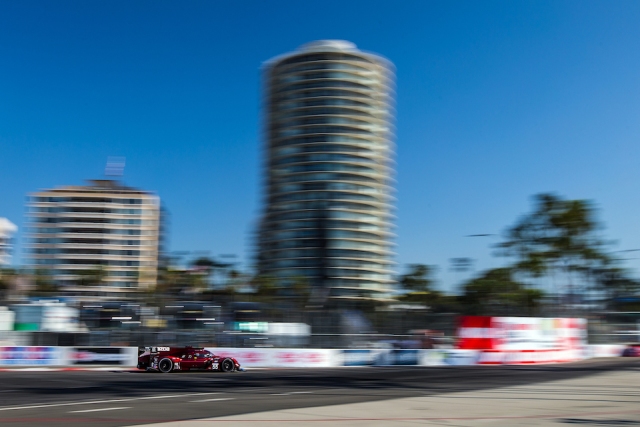 Sadly, this year, within the first few minutes of the race the No. 55 car was shoved into the wall by another car. The No. 77 car ran consistently and came in fourth. The Whelan Cadillac climbed into first, with the pair of Acuras filling out the rest of the podium. 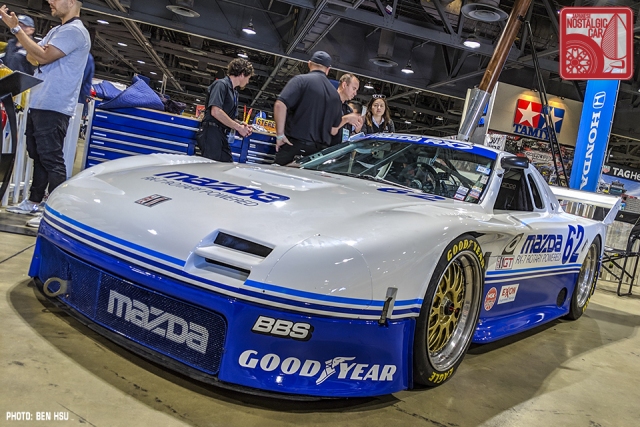 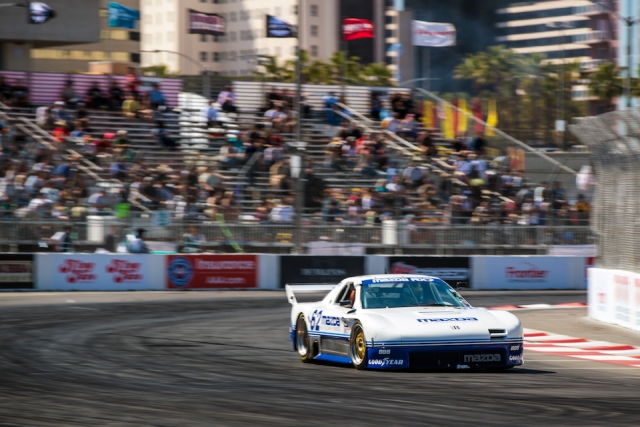 That same day saw a historic IMSA race that brought back memories of when events like this were broadcast on network TV on Saturday afternoons. Included in this class were the likes of Ford Mustang, Buick Skylark, Oldsmobile Cutlass and Chevy Camaro and Corvette, a Nissan 300ZX Z32 GTS, Nissan 240SX GTU, and, of course, Mazda’s FC3S RX-7 GTO. 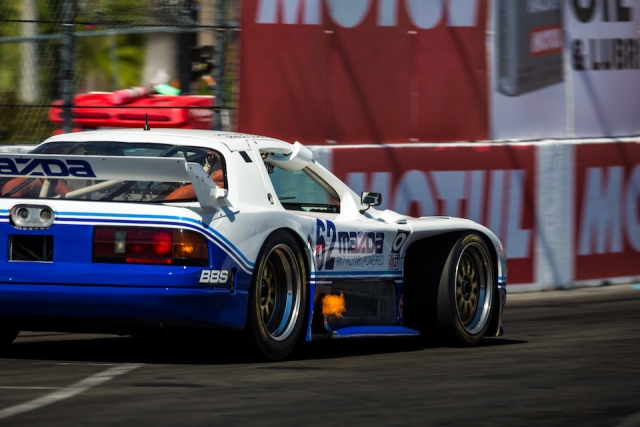 The race lasted only 20 minutes, but these vintage machines duked it out with ferocity. There was even some Chevy-on-Chevy crime that left a hot pink Camaro with a dreadful nose job. Mazda had just finished repainting its white and blue RX-7, which quickly became one of the stars of the race, its four-rotor R26B spitting flames from its side-exit exhaust with every downshift. 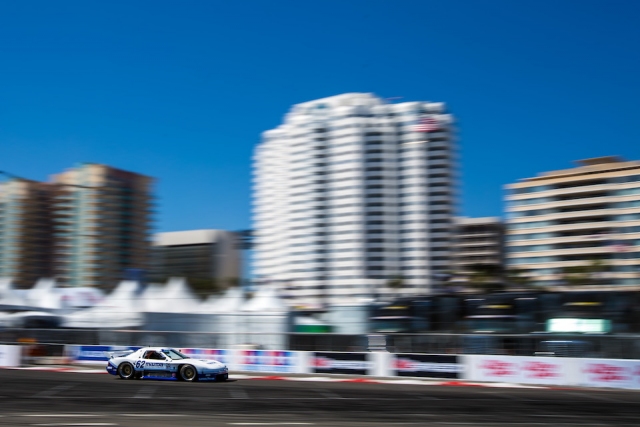 With over 100 IMSA victories, Mazda is one of the winningest marques in the series’ history. Though there was an absence during its Ford-controlled years, Mazda is trying to reignite the same mojo that made the RX-7s so memorable. Hopefully, the RT24-Ps can find their groove and reprise the performance of the old rotaries.