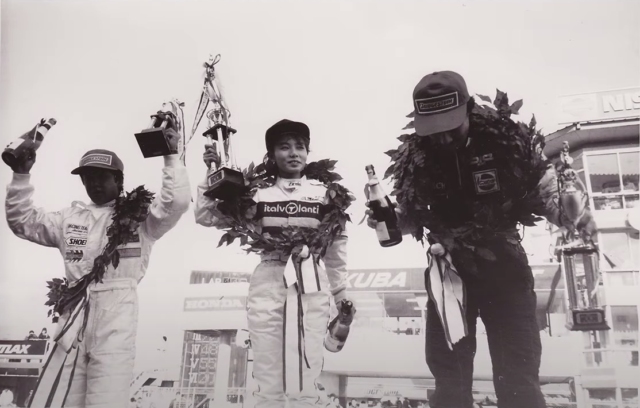 Mami Ayukawa is probably best known as a singer, but she was also a well-known racing driver in her time. She holds an FIA A-class racing license and competed in numerous races in Japan throughout the late 80s and early 90s driving for teams such as Tomei, all while maintaining her main career as a performer.

Ayukawa was born in Tokyo in 1961. On her blog, she once wrote that she admired athletes who could run fast and move like the wind. In fact, her first hit was “Kaze no Nou Ripurai,” or “No Reply from the Wind.” She herself couldn’t move fast, she says, so she chose to become a racing driver instead.

She started driving in series races in the mid 1980s, competing in the Tsukuba Challenge Cup in 1986 behind the wheel of a Nissan March. By the following year, she had gotten a seat on the Tomei racing team driving a Pulsar EXA in the Fuji Freshman Race. In 1989 she was one of three drivers of a Honda City at the Tsukuba Festival Night Game Endurance.

Her most famous stint was as pilot of the Italvolanti-sponsored VW Golf, in which she won her first victory in 1988. She became a VW spokesperson, even lending her voice to its promotional materials.

Ayukawa periodically wrote about her racing career on her blog, the brilliantly named “Mami’s Talking“. There, she described her driving style as more cautious, even though many people who learned about her A-Class license automatically thought she was an aggressive driver. She says she didn’t like driving in the rain, and that her braking point was gradually moved back. She rarely wrecked or broke her car, but sometimes her steady driving led to success.

It’s a bit unfortunate, but her fame as a performer has overshadowed her motorsports accomplishments. On the other hand, that’s what made her a great ambassador to the sport. In 1987 she was the recipient of the Autosport and Special Equipment Association’s ASEA Award for her contributions to the development of motorsports in Japan. Her racing career may have been short-lived, but she clearly made an impact.