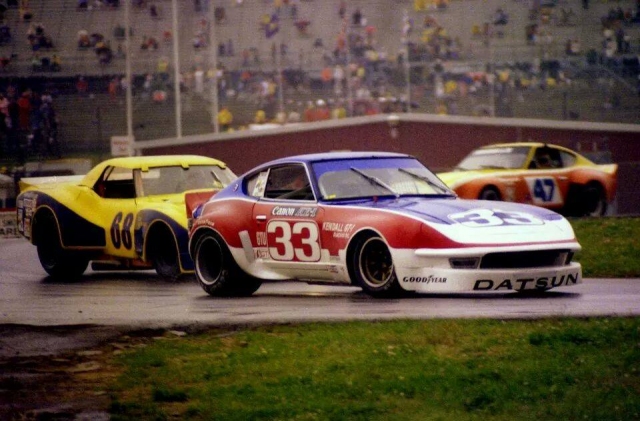 There was a time, not too long ago, when the US truly cared about road racing. On Saturdays and Sundays, Americans would tune into the International Motor Sports Association’s contests of speed, broadcast not on some obscure cable channel catering to gearheads, but on network TV. Car companies would proudly use these race cars in advertising. The best drivers became household names, and the cars weren’t just identical shells running different stickers to denote the brand. These were the golden days of IMSA, and marques like Datsun and Mazda dominated the scene. 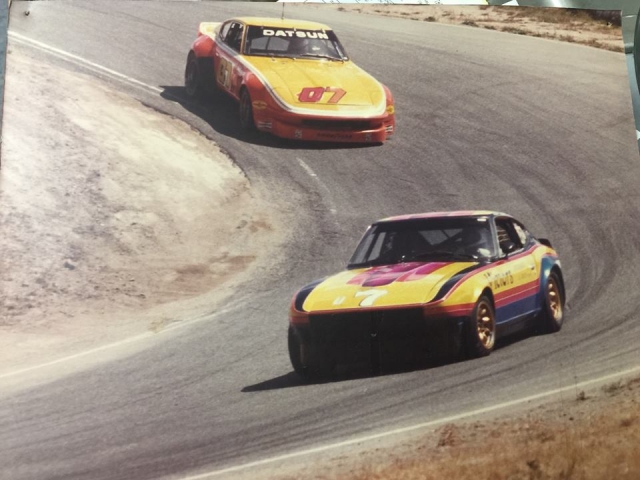 It was 1969 when inner turmoil between the Sports Car Club of America and its executive director would spawn a new race series that changed the face of professional racing as we know it. With John Bishop’s grassroots racing know-how and the huge finances of NASCAR president Bill France Sr, the first IMSA race was held at Pocono International Raceway in Pennsylvania. The series began with simple open-wheel cars, consisting of Formula Fords and Formula Vees, but audiences yearned for something bigger. Bishop began building the foundation for US sports car racing with the Fédération Internationale de l’Automobile’s (FIA) “J appendix” World Championship for Makes, thus birthing the Grand Touring era.

The GT era began with two classes, GTU and GTX. The letter U signified that the cars ran engines under 2.5 liters, and the X meant the cars were over 2.5 liters (later changed to GTO). The inaugural years of 1971-73 belonged to the Porsche 911, with championships going to Peter Gregg, Hurley Haywood, and Bob Bergstrom. However, around the same time newcomer Datsun had made its name known in SCCA amateur racing with multiple C-Production, B-Sedan, and C-Sedan national titles. Those Datsun drivers who had tasted sweet success in amateur racing were eager for a taste of the young professional series. 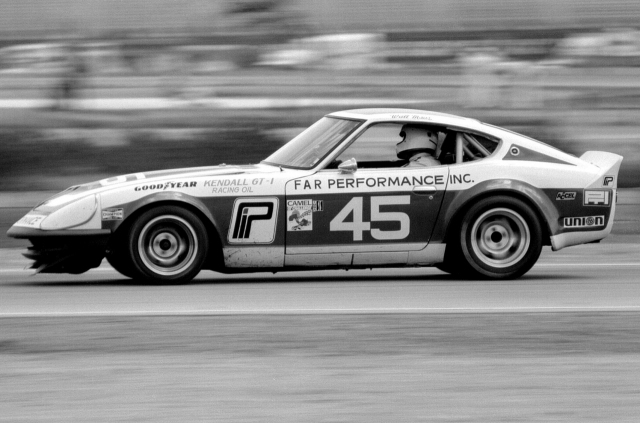 In 1974, a Bay Area auto repair shop off Old Middlefield Road in Mountain View, California began campaigning the first Japanese car in the IMSA GTU series, a Datsun 240Z. The car sported a homologated G-nose body with medium sized flares, a ducktail spoiler, and the white and red livery of FAR Performance. At the race seat was the already-tenured driver Walt Maas.

Maas dominated the competition with multiple podium finishes and took three first place finishes in twelve races that year. Maas’s 240Z was known for embarrassing larger bore and higher classed cars on the circuit, and as a result derived the nickname “Giant Killer.” Revell models even made a 1:25 scale model after the privateer shop’s machine. In fact, Maas, still racing in SCCA, proved victorious there as well, making the 240Z the only car that won both SCCA and IMSA championships in the same year and paving the way for many successful IMSA Z-cars to follow. 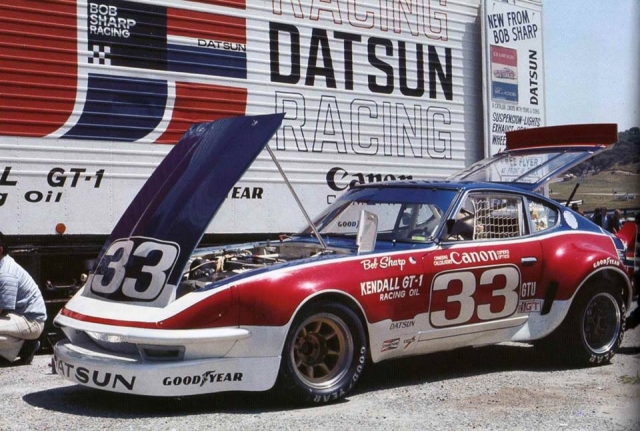 Meanwhile, Bob Sharp Racing, already a renowned factory-backed team in SCCA, added IMSA to their road racing campaigns in 1975. That year, the BSR team decimated the competition in their wide-bodied G-nose Z by taking 10 of 17 IMSA GTU race wins. That included the grueling enduros at Riverside International Raceway and Mid-Ohio. Maas and Jim Fitzgerald, paired with an experienced Bob Sharp, took both first place trophies in those extended races. 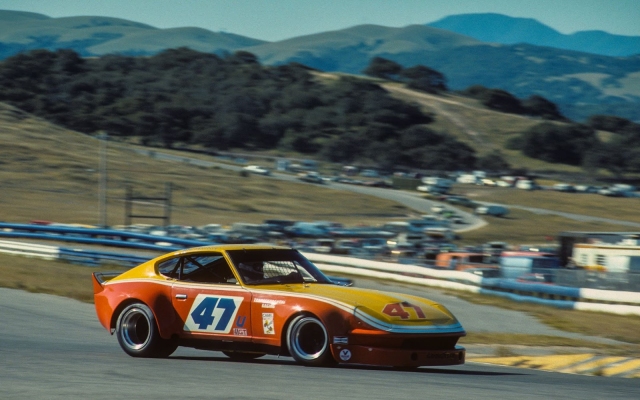 1976 was the year for privateer Brad Friselle and his Transcendental Racing team. After taking three race wins and being awarded IMSA’s Most Improved Driver award in 1975, Friselle was on a slingshot path to success. Friselle’s Z, like most IMSA GTU cars, had seen previous success in SCCA C-Production competition. However, it had undergone surgical improvements for IMSA competition by an all-star construction team: a suspension redesigned by Mac Tilton, chassis and roll cage preparation performed by Dave Kent, aerodynamic enhancements by Yoshi Suzuka, motor built by none other than John Knepp of Electramotive fame, and ongoing development of the car overseen by crew chief Joey Caviglieri. Can you say ringer? 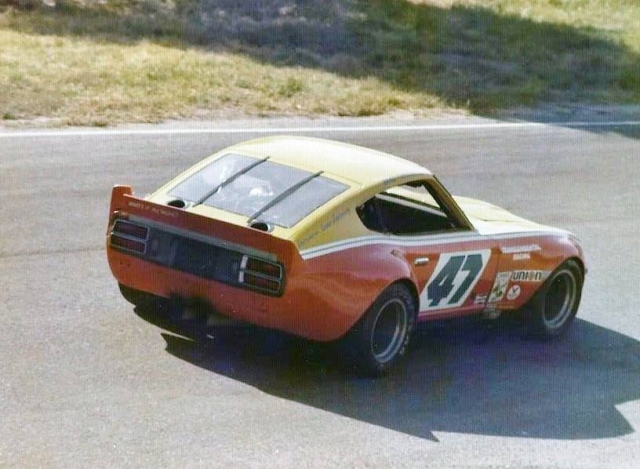 The dream team build resulted in eight wins of the fifteen races that year, including two enduros co-driven with BRE’s John Morton at Mid-Ohio and Road Atlanta. In the end, Friselle’s privateer team brought home the 1976 IMSA GTU championship, narrowly beating Maas, who had defected to Porsche in a 914-6 sponsored by Carlsen Porsche-Audi, and his four wins for the season. 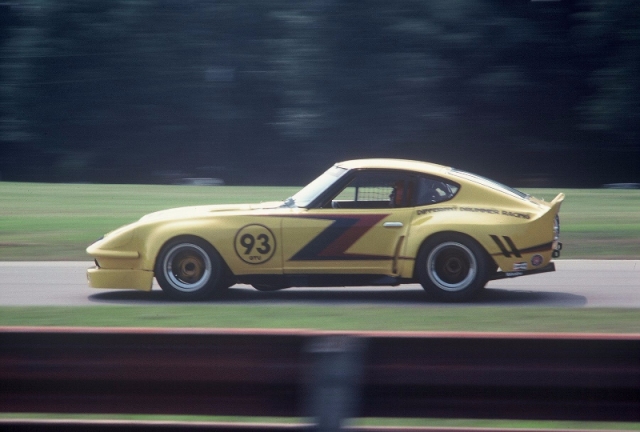 For 1977, after having seen a three-year Datsun dominance by Maas, Sharp, and Friselle, a new wave of SCCA drivers made the trek over to IMSA. These 240Z drivers included the likes of Frank Leary of Frogline Racing, Greg Sorrentino of Different Drummer Racing, Joel Anderson, Bob Speakman, Casey Mollett, and Ken Williams, among others. 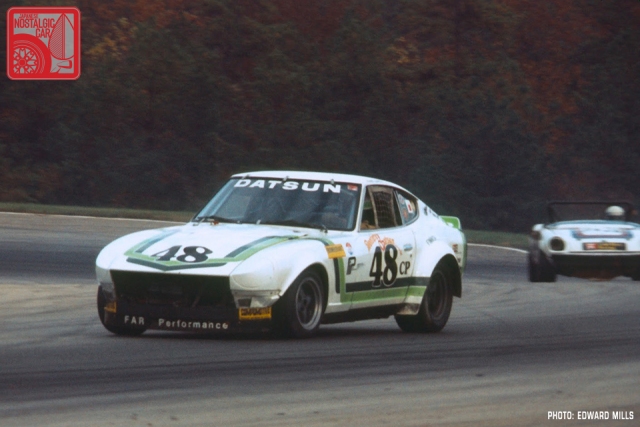 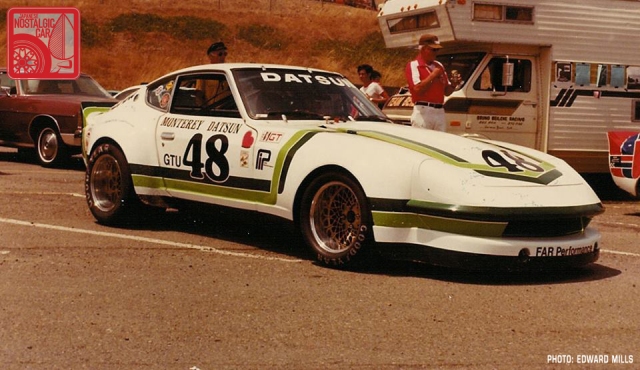 The appeal of the Datsun 240Z was undeniable. IMSA rules made it so that outside of the motor and tires, the car rules were very similar to those of the SCCA C-Production class. As a result, it was not uncommon to see cars swap body work and motors between SCCA and IMSA race weekends. Furthermore, the Z’s abilities far outmatched their costs, allowing teams with less budget to race in a professional series. 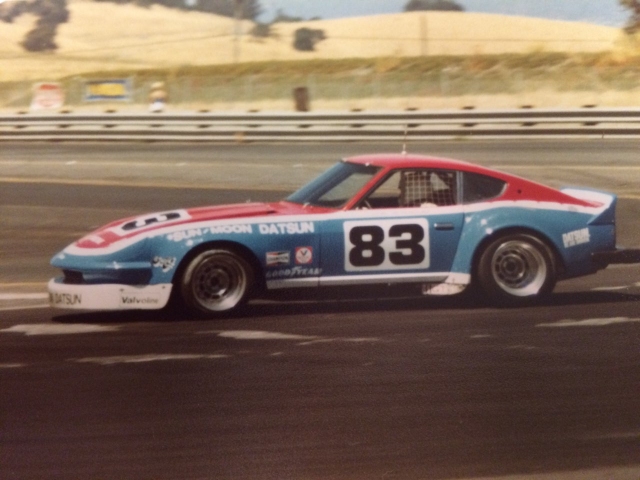 Electramotive, founded by John Knepp and Don Devendorf, entered their first Z-car in competition in 1978. Formed in El Segundo, California, the young but experienced team would start what would turn into more than a decade of IMSA success. 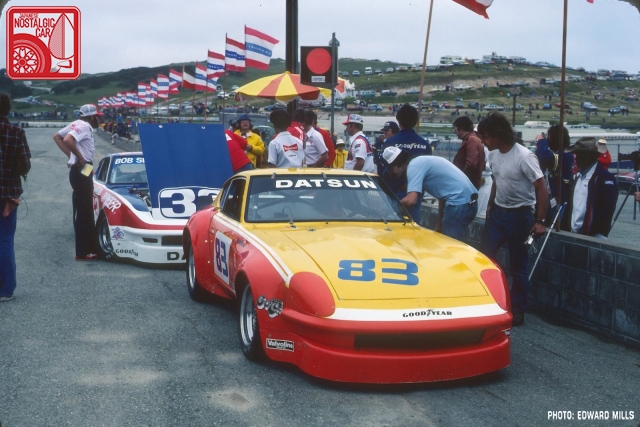 Their beginnings were humble, though. Due to a delay in development and construction of their own GTU Z-car, the Brad Friselle 1976 championship car was brought out of retirement on loan. Wearing No. 83, the car saw mild success in the early part of the 1978 season. The competition was fierce with a variety of other Z cars competing, including those of Sam Posey driving for BSR and former FAR Performance crew chief Frank Leary of Frogline Racing. When Electramotive’s own Z car was finally completed partway through the season, Devendorf took a much-needed and confidence-building win at Road Atlanta. 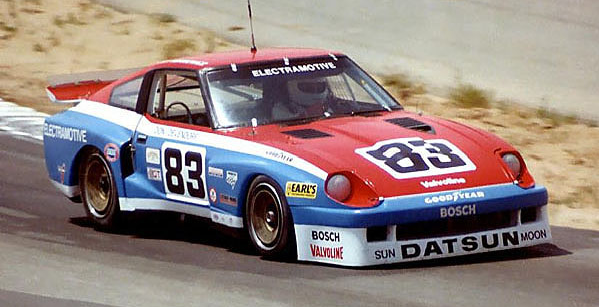 More importantly, it helped Electramotive bring momentum into the 1979 season. It marked the ten-year anniversary of the Z car’s production. With it came a new chassis, the S130, more commonly known as the Datsun 280ZX. Without hesitation, Datsun threw it right back into competition. Wins at nine of fifteen races that year helped Electramotive take a well-deserved championship medal. Although they routinely cleaned up the competition that year, the IMSA community could not help but notice a new player in the championship. 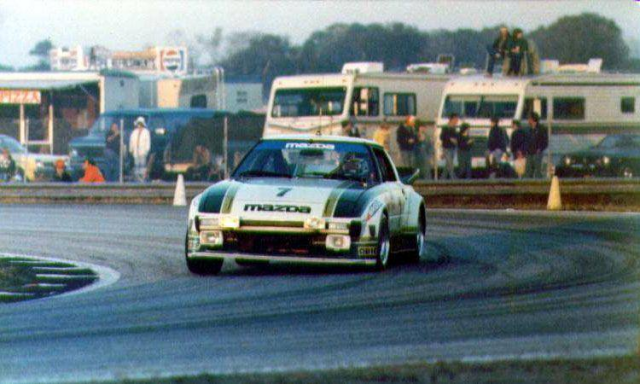 The Rise of the Rotary

The 1979 season’s first race, the 24 hours of Daytona, would prove to be an extremely important one for Japanese cars in IMSA history. It marked the the twilight of the Z-car and rise of Mazda rotary. From Japan, Mazda Technical Center arrived at Daytona with an IMSA GTU-prepared Mazda RX-7 and lineup of legendary Japanese drivers: Yoshimi Katayama, Takashi Yorino, and Yojiro Terada.

The factory works team executed a surprising upset, not only for fellow Japanese manufacturer Nissan, but a slew of other factory teams including Porsche. Later that season, Walt Bohren, along with Bob Bergstrom and Rick Knoop would take their seat at the top of the podium at Brainerd and Road America, both in RX-7s. If it was not for a late spin by Katayama at Portland, the factory-backed 7 would have brought its win total to four of fifteen that year. 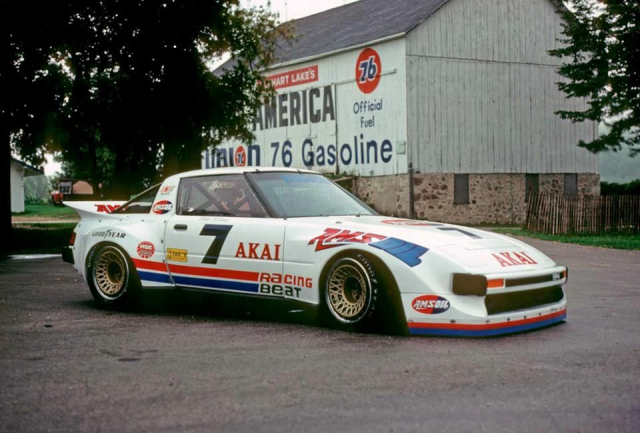 1980 would prove to be a year to remember. With ten wins out of 14 races by Mazda factory-backed teams, Hiroshima clocked a tremendous blow to Datsun’s IMSA success. Seasoned competitors included Roger Mandeville, Jim Downing, Jeff Kline, Yoshimi Katayama, Brad Frisselle and John Morton, who had migrated over to Mazda. However, the driver who shined brightest was Walt Bohren, piloting the infamous Racing Beat Akai RX-7. Eight race wins gave him and Mazda the driver’s and manufacturer’s championship that year. Datsun was only able to squeeze out just three wins that year with both Electramotive and Alderman racing. 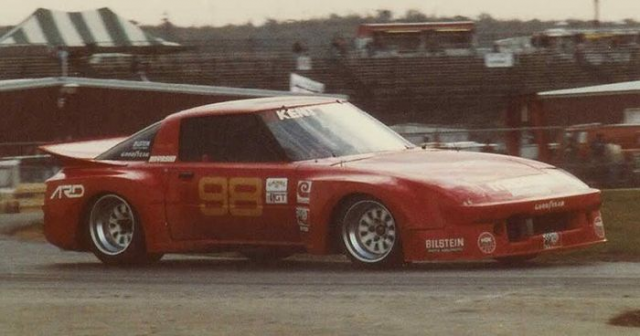 Mazda’s dominance continued into 1981 and pilfered yet another former Datsun driver, Lee Mueller. A new win-loss record was set again when Mueller and Bohren formed Kent Racing, which took 11 of 16 wins. 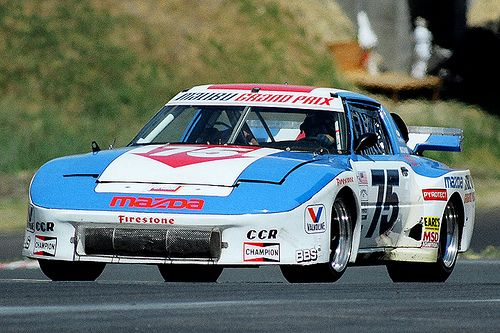 It truly became a battle between Nissan and Mazda, and aside from some early wins by Porsche, all other marques fell by the wayside. To summarize, the first three years of IMSA GTU championships belonged to Porsche. After Nissan entered in a big way, the Datsun 240Z swept three years in a row from 1974-76. Porsche returned to success in 1977-78, the Datsun 280ZX took back the championship in 1979, and the Mazda RX-7 dominated from 1980-88. For the class’ entire 23-year existence between 1971 and 1994, all but five championship were taken by either Nissan or Mazda.

Towards the end, the rules had changed enough so that GTU cars became tube-framed racers bearing little real resemblance to their road-going counterparts. And we haven’t even begun to mention the success of Nissan, Mazda, and Toyota in classes such as GTO, GTP, RS, and WSC, which ran dedicated racing machines with no street-legal analogues. 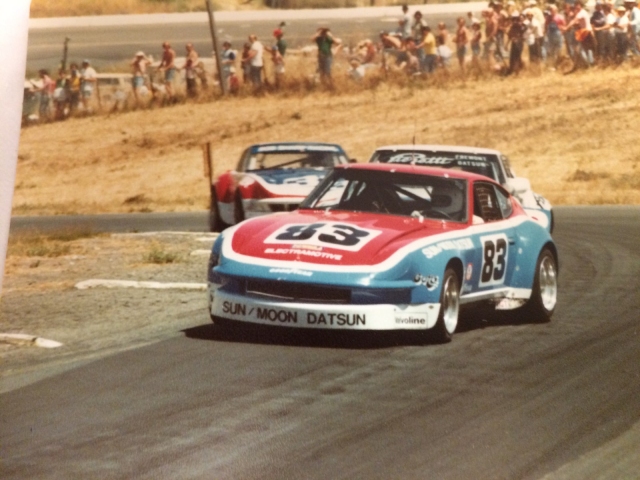 However, the GT era will always be fondly remembered for when its cars resembled ones you could buy off the shelf at the dealership — and when Japanese marques ruled the ascendant years of the country’s premier road-racing series. With this domination, it is without a doubt that Japanese cars have earned their place in IMSA racing history, supporting many an amateur-turned-pro driver along the way.

11 Responses to MOTORSPORT: When Nissan and Mazda ruled IMSA GTU