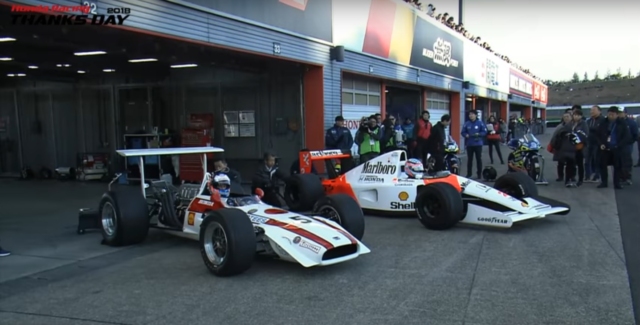 Like Nissan, Honda has its own day-long motorsports festival in December. The Honda Thanks Day, held to show appreciation for its fans, was held last weekend. For those that couldn’t attend, Honda has provided eight hours of livestream footage from the event.

There are a few differences when compared with the NISMO Festival. For one, Honda owns its own race track, Twin Ring Motegi in Tochigi Prefecture (it also owns Suzuka, but the event was held at Motegi).

Also, where as Nissan’s festival seemed like a celebration of days past, while Honda is about modern day racing. Honda has its fingers in just about every type of motorsports there is. There’s karting, motorcycle trials, Formula cars, MotoGP, SuperGT NSXes, and a demonstration run for vintage F1 cars.

Because Honda is still participating in so many forms of racing, it has celebrities galore. Honda can put F1 champion Jenson Button and Indy 500 winner Takuma Sato — former BAR teammates — against each other in a one-make race of N-One kei cars. Or put a bunch of racing celebs in go-karts like a bunch of normals. There’s a Winner’s Run that has them demo lap their respective race machines all at once.

Our favorite, though, is the one-make motorcycle race comprised entirely of Super Cubs.