Do you wish you could have a 1960s Honda F1 car of your very own? A British outfit called Stuart-Taylor Motorsport is building a life-size replica of the 1968 Honda RA302, an interesting choice considering the original’s morbid history. 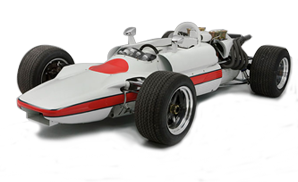 While the RA272 is the most famous of Honda’s 1960s Formula One cars, having won the firm’s first Grand Prix in 1965, replicas of that have been made already.

The RA302, on the other hand, prompted Honda to leave F1, due to its hugely public and tragic crash that killed driver Jo Schlesser. The Stuart-Taylor website describes its history thusly:

The RA302 of 1968 is something of an oddity, introduced with a magnesium skinned monocoque and an air cooled V8 engine it was certainly innovative and there had been plenty of outside the box thinking going on – the driving position was very far forward and left the drivers legs very exposed to serious damage though with hindsight that would have been a relatively minor bruise compared to the very public death of Jo Schlesser in a RA302 fireball at Rouen – after testing the car John Surtees wisely chose not to run the new 302 however Honda France chose to run the car with Schlesser and after 2 laps the car speared off the track and rolled, swiftly igniting the full tanks of fuel and trapping the driver in an appalling public cremation.

However, the British are excellent at building cars from whole cloth, and managed to recreate the rare Honda racer by using the old RA302’s damaged nosecone and a 5-inch scale model. The replica isn’t as dangerous though:

Having discussed the inherent dangers of the “feet forward” driving position it was decided to produce a car that represented the aesthetic of the 302 using the F1-67 chassis as base, the F1-67/302 wheelbase is slightly shorter and we will be water cooling the engine, modifications to the front of the chassis will be made to accommodate the lower nose profile.

Aluminum will be used throughout, rather than the original’s deadly and easily flammable magnesium. With the only remaining RA302 tucked away at the Honda Collection Hall in Japan, this appears to be an excellent (and safer) alternative that can be run fast while looking stunning.

permalink.
This post is filed under: motorsport and
tagged: Formula One, honda, RA302.