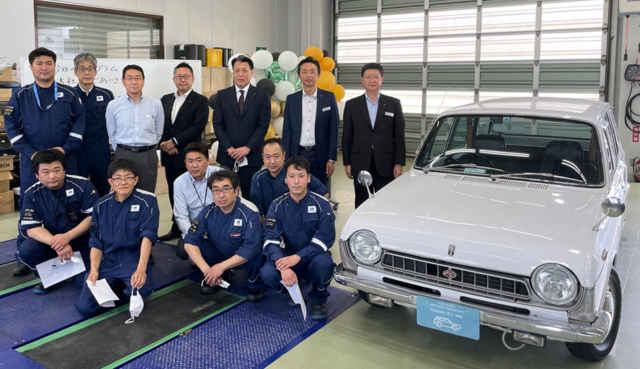 A Subaru dealership in northern Japan is conducting an incredible bare-metal restoration of an ff-1 Van. It’s one of Subaru’s most obscure models, but there’s good reason why they’re treating the project as seriously as a Toyota 2000GT restoration. As it happens, the dealership company, Miyagi Subaru, is where, half a century ago, an ff-1 was converted to AWD to create the first all-wheel-drive Subie. The prototype was taken to HQ and became the template of all modern Subarus. 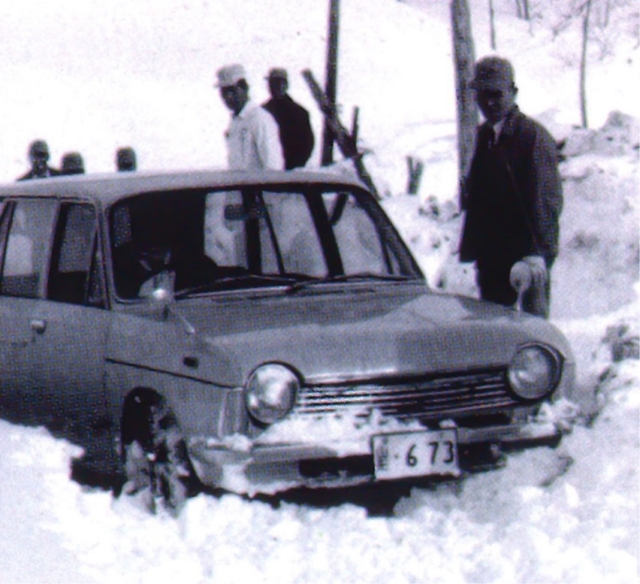 We’ve covered the history of that first AWD Subaru before, but the short version is that Miyagi Subaru was approached in 1970 by the Tohoku Power Company, which was looking for a vehicle that could traverse snowy climates so their employees could maintain power lines. Because of their front-drive layout — still novel at the time — and flat boxer engine that allowed the spare tire to be stored atop the motor, Subarus were already known for being excellent in the snow. 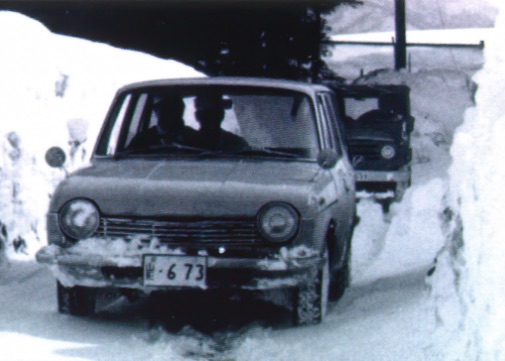 Miyagi built a few prototypes, fitting differentials and propeller shafts to ff-1 Vans, with the rear diff and axles taken from a Datsun 510 wagon. Eight of them were built for Tohoku Power, but Fuji Heavy Industries loved the idea so much they incorporated the idea into the production Leone. Unfortunately, the last surviving example of the original eight was destroyed in the 2011 earthquake and tsunami. 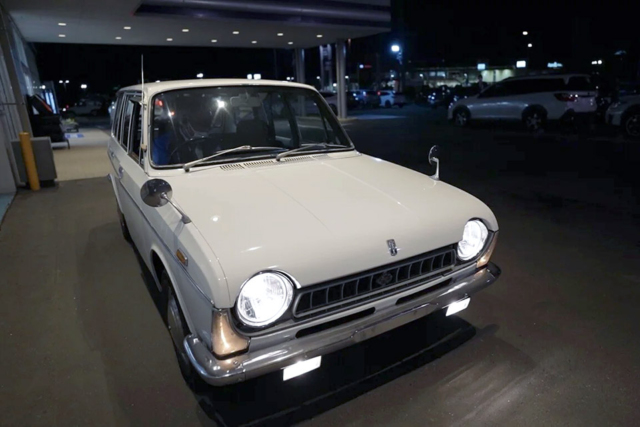 The ff-1 Van that Miyagi Subaru is restoring isn’t an AWD one. It was purchased from a private owner in Tochigi a year ago. An introduction on the company blog optimistically pointed out how nice the condition of the body looked. But as is the case with such projects, once they began tearing into it they found more and more work waiting for them. The project began last June and was expected to be done by now. In addition, the COVID-19 pandemic slowed progress and another earthquake in the region damaged some parts. However, Miyagi Subaru is persevering, and the effort is truly admirable. 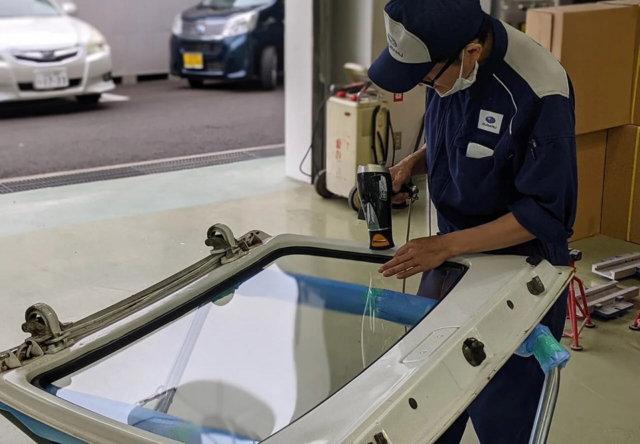 Some of the highlights include the ordeal of removing the glass to that the body can be repainted. Even Subaru can’t get replacement windshields, so technicians had to painstakingly remove the hardened weatherstripping with a heat gun and flathead screwdriver, bit by bit, being careful not to scratch the glass. 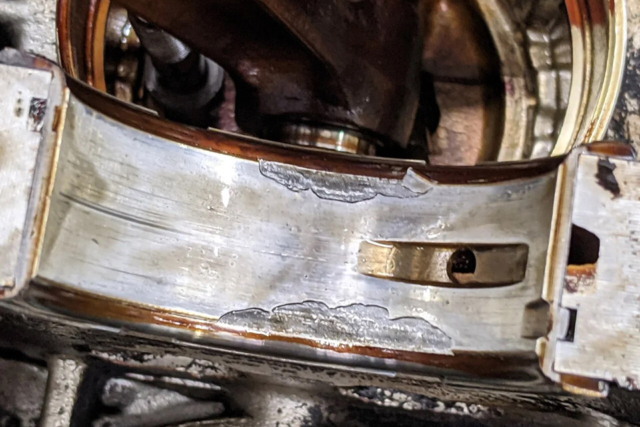 When staff began disassembling the flat-four engine, they discovered that some of the metal had peeled off of the crank bearings. They also had employed army of people to cleaning deposits off engine parts by hand. It’s not clear why they didn’t hot tank it but perhaps it’s because Subaru didn’t want to risk damaging the lightweight Duralumin used on some engine parts. Duralumin is most commonly found on airplane fuselages, a reminder that Subaru was borne of Nakajima Aircraft and many of its engineers specialized in aeronautics before making cars. 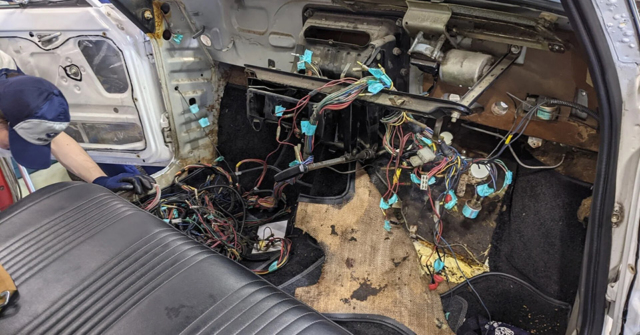 Another unwelcome surprise came when they began removing wiring harness. Apparently, the old service manual’s wiring diagram only showed the systems without including specific placement or connector specification. Given the age and brittleness of the loom, technicians decided to recreate the entire harness with the correct color wires in every position. 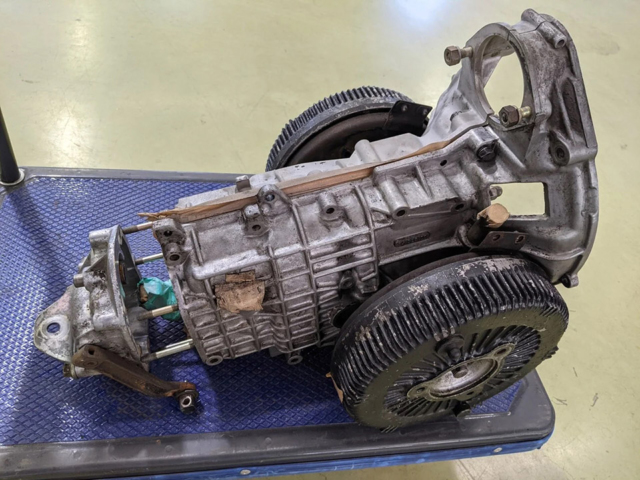 Another reason why the ff-1 had stellar grip was its brakes. They used inboard drums that attach directly to the transmission. Less unsprung weight meant the suspension could return the wheel to the ground more quickly, resulting in better contact with the ground. However, the design was an evolutionary dead end, as the design proved too difficult for maintenance. 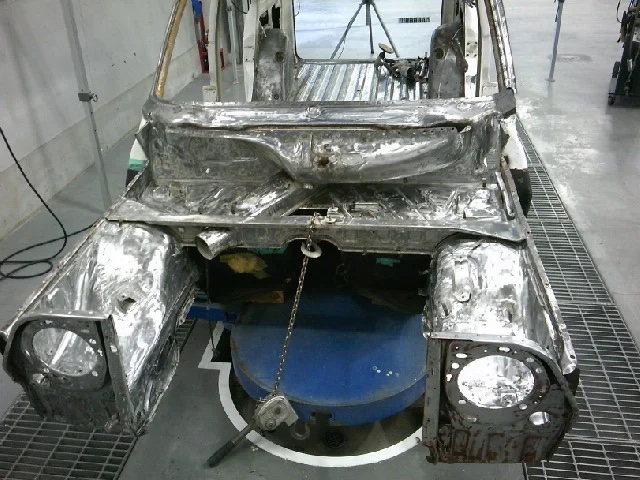 In a related matter, Subaru claims that the Subaru 1000, a predecessor to the ff-1, was the first mass-produced car in the world to use two constant-velocity joints, reducing vibration and improving smoothness and steering. The setup employed a CV joint on the wheel side and a double-offset joint on the differential side. 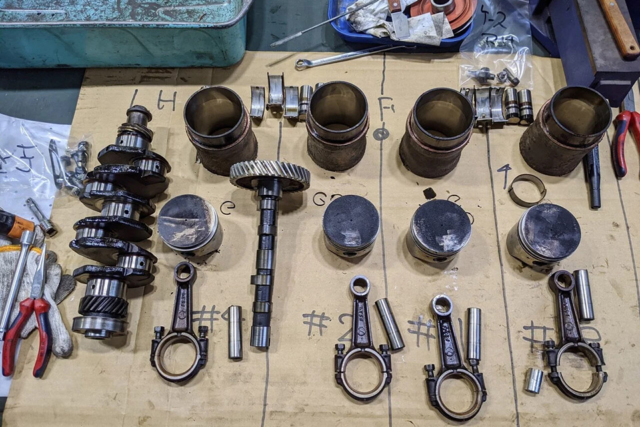 Unfortunately, when it came time to sandblast the transmission case, the fine media got into the CV joint bearings. No matter how many times they tried to wash the bearings, they couldn’t get the sand off. The solution, it turns out, was to submerge the bearings in a large tub of water, blow compressed air onto them to lift the sand, and let the water carry it away. 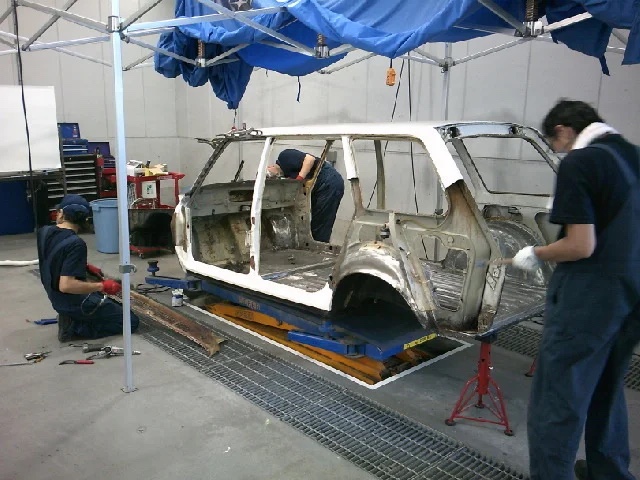 Originally, Miyagi Subaru thought they’d only have to do some localized body work, but the more they dug into it the more rust they found. The cancer had eaten its way into the floorpan, the rear quarter panels, and technicians discovered evidence of past metal repair. At that point, there was nothing to do but to go to bare metal. 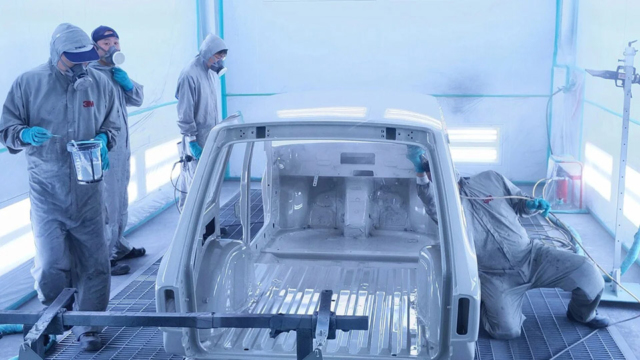 To get the right paint, they used a high-tech color sensor computer to read the existing color and mix new paint to match. The original color was called Dene White, which old Subaru materials say was inspired by the beaches of Solenzara in Corsica, France. Miyagi Subaru theorizes that the name was chosen because the song “Memories of Solenzara” was popular in Japan in the 1960s. 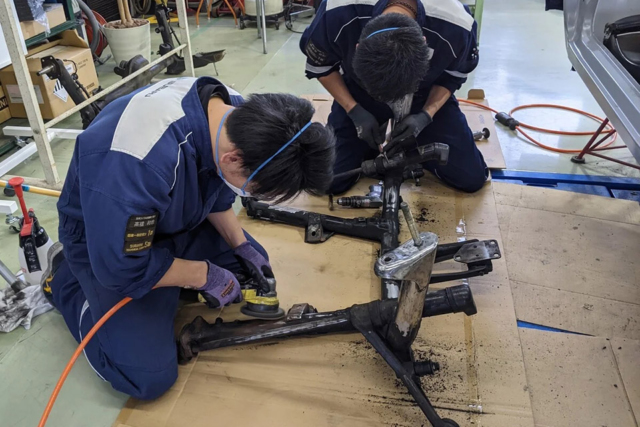 Once the body emerged from state-of-the-art paint booth, it was time for underbody coating. In the meantime, techs arduously removed rust and grime from suspension and other underbody pieces and restored them to a glossy factory black.

It wasn’t all bad, though. The team discovered that the gas tank was clean inside and that the seat upholstery still supple. 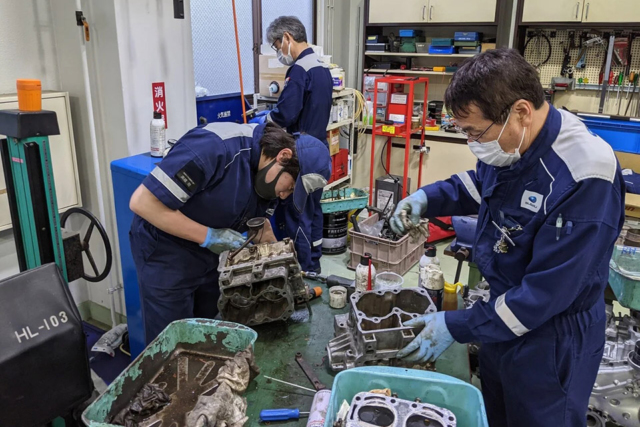 One of the best parts of this restoration is that all the work is being done by Miyagi Subaru Miyagi employees. While it’s being advised by employees who are over 60 years old and have experience with ff-1s when new, everyone is pitching in, including sales staff. The company wants them to learn how a car works and the history of the marque. Miyagi Subaru runs all the Subaru dealers in Miyagi Prefecture, so employees from other dealerships have been taking turns helping restore the ff-1. 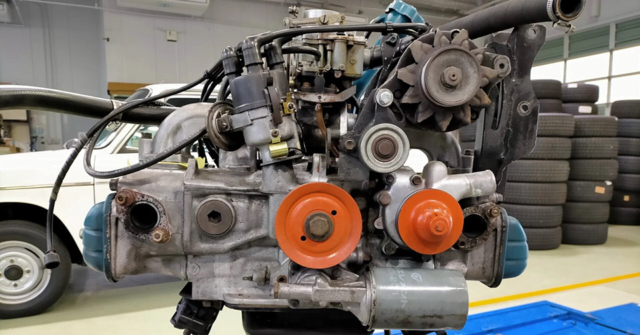 The car was supposed to be done in time for a 4×4 Day exhibit at Best Shop Kuryu, Subaru Miyagi’s flagship store. That deadline has passed, so the company is currently displaying a door-less, interior-less, and fender-less version of the work in progress. Now customers get a glimpse of the restoration process as well. It’s probably the most thoroughly restored ff-1 Van on Earth, and the effort put into it deserves an audience.

permalink.
This post is filed under: News and
tagged: ff-1, subaru, wagons.