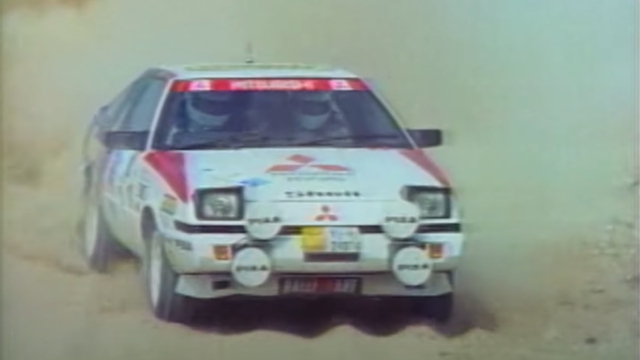 Well this was unexpected. Just when you thought Mitsubishi was content selling Mirages and Eclipse Crosses, they unleash a bunch of footage from when the company still had guts. Though short, each video features raw clips of Lancers, Starions, Galant VR-4s, Evos and Pajeros tearing through dirt, sand, and snow. All are unencumbered by music, just pure engine sounds. Take a look, they might just be enough to make you un-forget an utterly forgettable brand.

It starts with a Galant GS at the Southern Cross Rally, not technically part of the WRC calendar but a significant event all the same. By 1974 Mitsubishi would enter the WRC and win the East African Safari Rally with a Lancer 1600GSR.

The Ralliart name debuted in 1981 on the box-type Lancer Turbo. Sadly, the open-headlight Group B Starion only raced in some non-WRC rallies before the class was killed.

The late 80s saw Mitsubishi return to WRC with the Galant VR-4, but Mitsubishi really hit its stride with the debut of the Lancer Evolution, which debuted in 1993. It struggled at first, but incremental development made it a competitive machine by the end of the season.

Development continued, resulting in the Lancer Evolution II. That car won its first WRC victory for the Lancer nameplate at the Swedish Rally in 1995. The debut of the Evolution III and its unique electronic active diff, Tommi Mäkinen won five races in the 1996 season and the Drivers’ Championship title.

From 2001 Mitsubishi campaigned a dedicated WRC machine not based on a production car. However the team became less and less competitive as the company’s fortunes waned and several key players left for other teams or retired. Mitsubishi pulled out of WRC in 2006, planning to restructure and return in 2008. Unfortunately, the global financial crisis prevented any of that from happening.

At the same time, Mitsubishi was also participating in the Paris-Dakar Rally with the short-wheelbase Pajero. It won its class on its first attempt in 1983 and in 1985 on the race overall. The car was largely stock.

Between 1992 and 1993 Mitsubishi returned to Dakar, winning the overall championship twice consecutively. These were specially constructed cars, technically a tube-frame construction called the Pajero Prototype.

From 1997 to 1998 the Pajero Evolution logged another two consecutive victories. Mitsubishi had returned with another production vehicle based on the second-generation Pajero.

From 2001 to 2007, Mitsubishi’s unprecedented streak of seven consecutive victories made it the winningest marque ever to compete in the race. Added to its previous five wins, it made a total of 12 overall winner’s trophies. The Paris-Dakar Rally was canceled in 2008 due to threat of terrorist attacks. At the same time, Mitsubishi used the opportunity to pull out due to its own financial troubles following the global financial crisis. It never returned, but its record still stands.

It’s kind of amazing that a company that seems perpetually on the brink of collapse has been able to accomplish so much in competitive rallying. But at least we can look back on these videos and hope for, someday, a return to form.

permalink.
This post is filed under: motorsport and
tagged: mitsubishi.