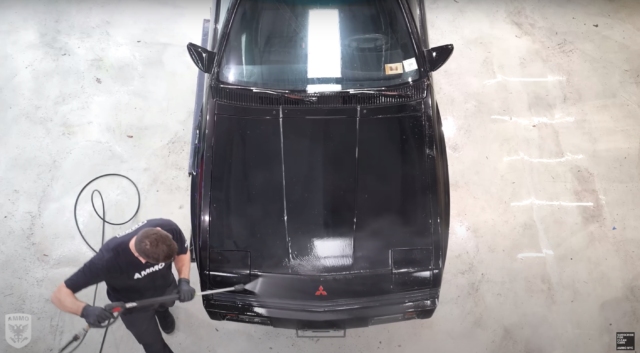 The Mitsubishi Starion might look like a boxy, uncomplicated car to clean from afar. But all those straight lines must intersect in corners, and those many little nooks can be a real pain to keep spotless. Most 80s cars are like that, especially on the inside with the myriad buttons and crevices, and especially when you let one sit for 26 years in a damp garage in the northeast.

In the latest video by Ammo NYC, master detailer Larry Kosilla finds a 1988 Mitsubishi Starion from a guy that looks like Christopher Walken’s long-lost cousin. Turns out he had purchased a Mitsubishi Starion in 1988 and daily drove it for eight years. Then it started to overheat, so he parked it in his garage for 26 years.

Now even the dust on the car qualifies for historic plates in most states. But what’s worse is the interior, which is covered in nasty mold. The transformation that Kosilla gives the car is nothing short of miraculous. The key to getting all the gunk out of the narrow spaces is using various soft brushes. That, and lather, rinse, repeat over and over again. The amount of grime that comes out of the car is eye opening.

Unfortunately some areas of the single-stage paint were too far gone, even after a polish. Still, the car goes back to the stunned owner looking a million times better than it did. Hopefully he can rebuild that G54B and get it back on the road.

permalink.
This post is filed under: Video and
tagged: mitsubishi, starion.