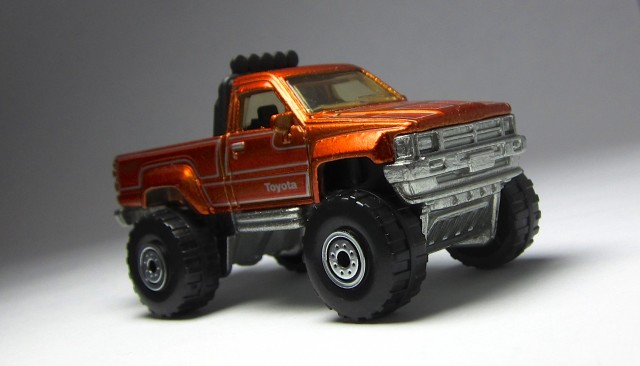 Toyota isn’t the only company getting nostalgic for the 80s with its latest batch of TRD trucks. Hot Wheels‘ latest line of premium collectibles is the Cool Classics series, and with 25 of the 30 cars released it was looking like your typical parade of Detroit iron. Then suddenly, a 1987 Toyota Pickup!

The Cool Classics series harkens back to the original Redline era Hot Wheels of the late 60s and early 70s. The packaging design and colors are reminiscent the very first models that debuted Mattel’s toy cars in 1968 (though the paint is an updated matte-like Spectrafrost as opposed to the old school reflective Spectraflame).

Finished in bronze with a cool 1970s-style stripe package, it’s a cool departure from designer Jun Imai’s typical laid out sports kyuusha. We even get “Toyota” in Helvetica on the doors.

This is the second appearance of the 1987 Toyota truck in a premium series, having debuted as a Hot Ones back in 2012. This will surely be a hit with collectors, but the best part is that an even more desirable version is forthcoming, an all-black Back to the Future themed example to debut soon in the Hot Wheels Entertainment line.