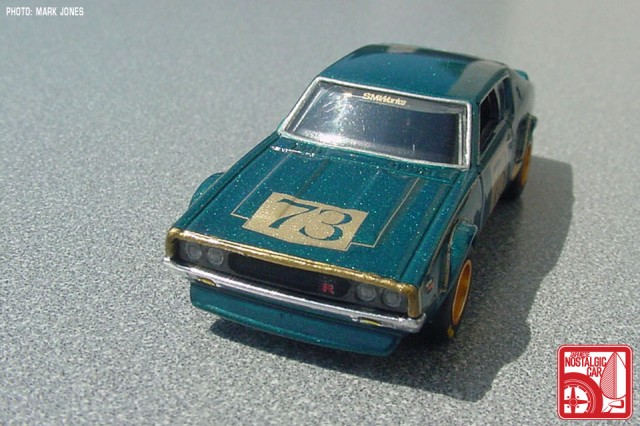 At the 1972 Tokyo Motor Show, Nissan unveiled what would become the next generation of the famed Skyline GT-R racers. The KPGC110 in racing livery and gold RS-Watanabes was intended to carry on the winning tradition of the previous generation’s famed touring cars. Unfortunately the 1973 Oil Crisis and emissions regulations forced Nissan to reevaluate its racing program and the GT-R itself, leaving behind the show car as a stark reminder of what could have been. Many replicas of it have been built; here’s JNC and Mark “ScaleMaster” Jones‘ take on it. —Ricky

Thank you, Ricky, for the intro and for providing the direction and reference for this piece. I used the Hot Wheels Nissan Skyline 2000GT-R released in 2011 for this project. Mattel made it in only one color, pearl white, and it quickly became my favorite nostalgic casting. 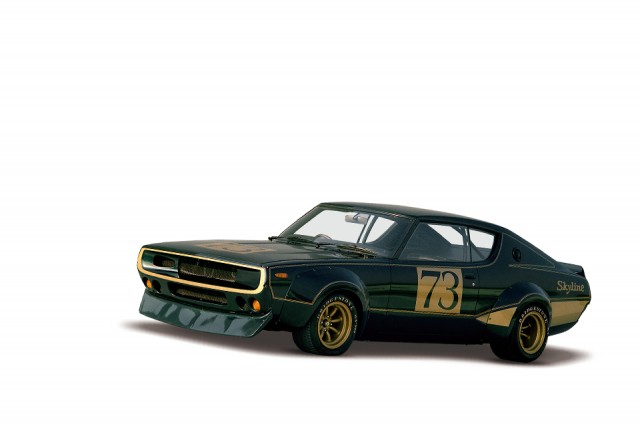 As Ricky mentioned, the 1972 Tokyo Motor Show KPGC110 is the real-life car that inspired this build. The same techniques as discussed in the “How To Build Custom Hot Wheels BRE Datsuns” article were applied to prepare and finish this one. 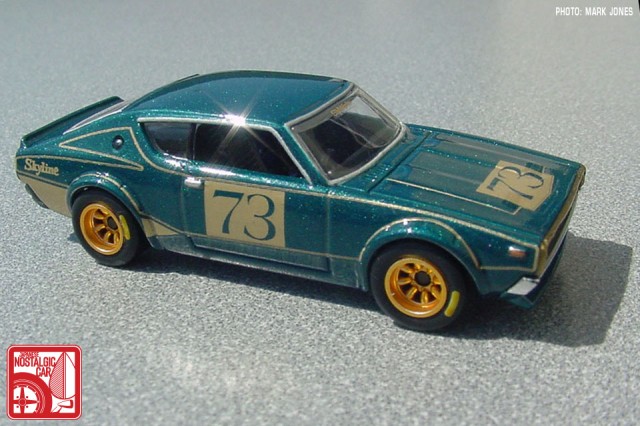 The color is Boyd’s Chezoom Teal enamel by Testors. While the paint’s glittery flake is more prominent than in the 1:1 Tokyo Motor Show car, this is a tribute car and a Hot Wheels to boot, so some latitude of artistic license was applied. Once the body was airbrushed teal and the custom-made gold decals for the main graphics were applied, it was clear coated with two part automotive urethane clear. 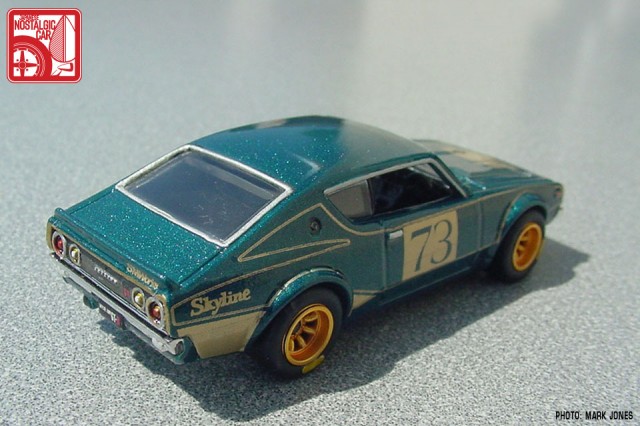 The gold trim on the nose and tail was hand painted with as close of a gold paint as I could find to go with the decals.  The window trim was also painted the same way using Tamiya chrome silver. 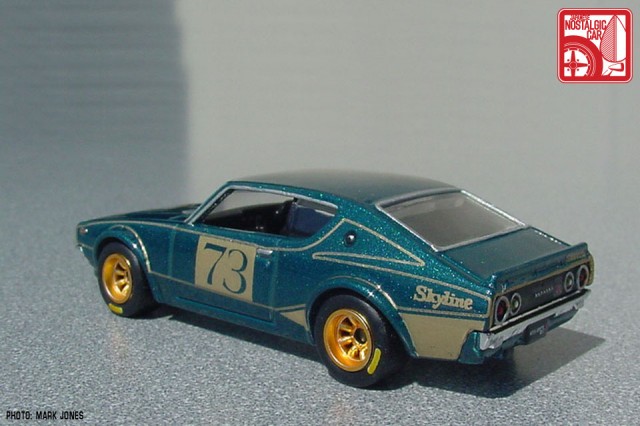 The chassis is molded with the front spoiler and rear valance as well as the bumpers as one piece and plated chrome. The spoiler and valance were brush painted with the same teal paint as the body.  I found it easier to hand paint those items than to mask and spray them, but the latter is an option for those who prefer to spray. The parking lights molded into the bumpers were painted with clear yellow and white following the reference photos of real cars. 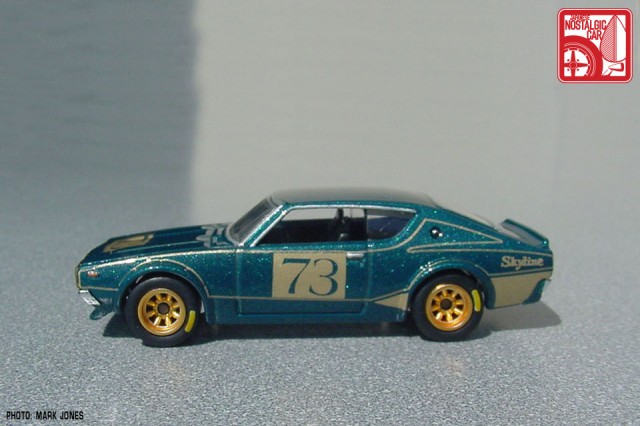 While the quality of wheels has been improving on main line Hot Wheels, this subject absolutely needed a set of new barrels. Watanabe-esque wheels were donated from a higher end Hot Wheels Olds Aurora GT-1 racecar. They were finished in a bright gold plate from Mattel, too bright for this car. 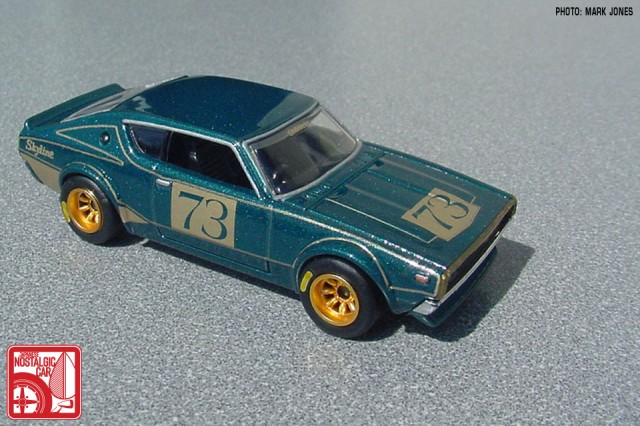 After adding a set yellow side wall graphics to the tires, the wheel sets were airbrushed with clear flat lacquer. I used some 50 year old Pactra Highball paint, but Testors Dullcote is what is available now and will do the trick just fine. 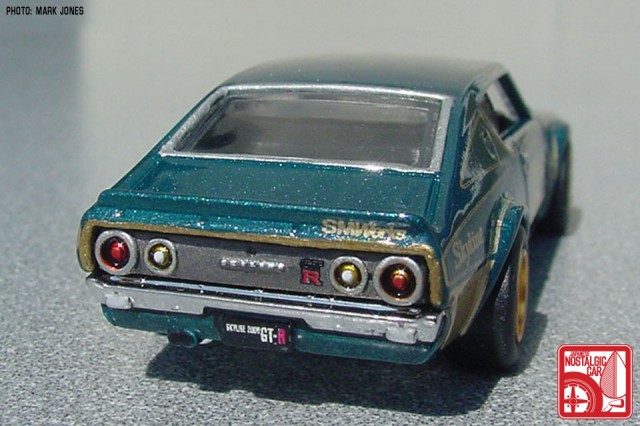 The front grille and rear taillight panel are molded to the interior. On this car it works great. I painted the end panels flat gunmetal and brush painted the details. I used flat black for the grill and white for the headlights up front. Chrome silver, transparent red & yellow, and white were used to bring the rear to life. Tamiya acrylic paints were used on those items. The GT-R and Skyline badging was replaced (the car comes with one GTR on the rear from Mattel) and added to with more decals and a license “plate” I made. 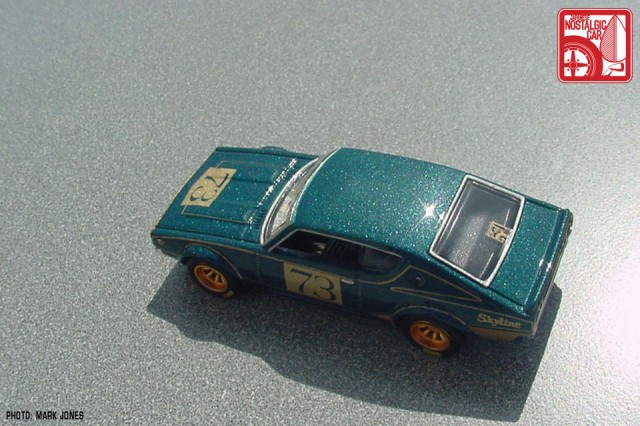 When I originally photographed it I had neglected to include the JNC inkcan for the rear window. That particular situation has been remedied. 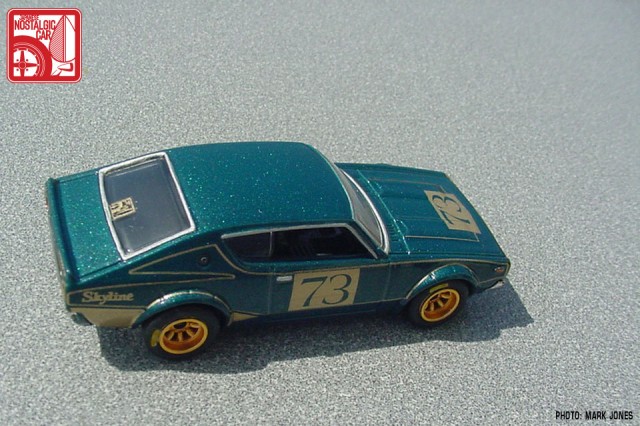 Those of you who were at the JNC booth at the Japanese Classic Car Show in Long Beach may have seen a glimpse of this car on display, fitting in nicely with the 40th Anniversary of the kenmeri limited edition shirt that JNC created for the event.