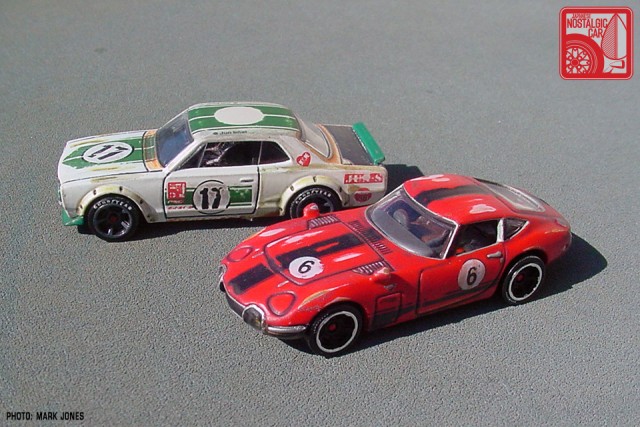 For almost as long as there’s been Hot Wheels, there have been customizers. Lately the trend in modified Hot Wheels, especially with the new generation of collectors, has been the use of patina to emulate worn out, barn find, or rat rodded cars. Some have been really outstanding, while others suffer from “Titanic syndrome” where the idea seems to be the more rust the better. With that in mind, we once again we turn to our friend Mark Jones (aka Scale-Master), for his take on weathering and adding patina to Hot Wheels cars. 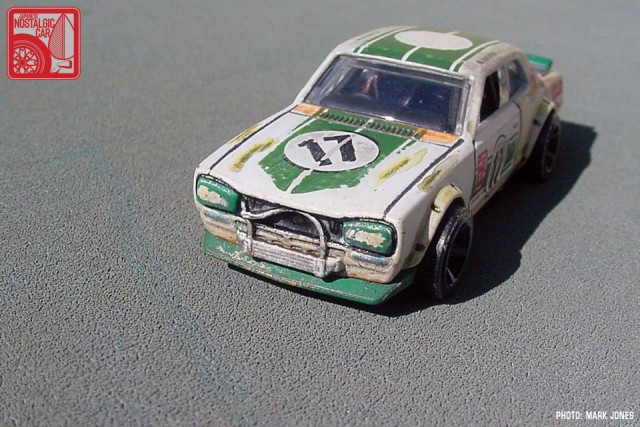 The premise of this exercise was simple: to use existing and original finishes without repainting the actual cars. Since these are race cars, we imagined a story. For the Hakosuka Skyline, the background went something like this: after winning its last race in 1973, this semi-works car was parked, battle scars and all, in a nondescript shed in rural Japan. The driver went on to pursue a professional international driving career, but after many years abroad, he gets a call from his mechanic asking, “Hey, when are you gonna pick up your old car?” Because of Japan’s climate, it has some deterioration, but after servicing the mechanicals and perishable parts the car fired right up and ran. 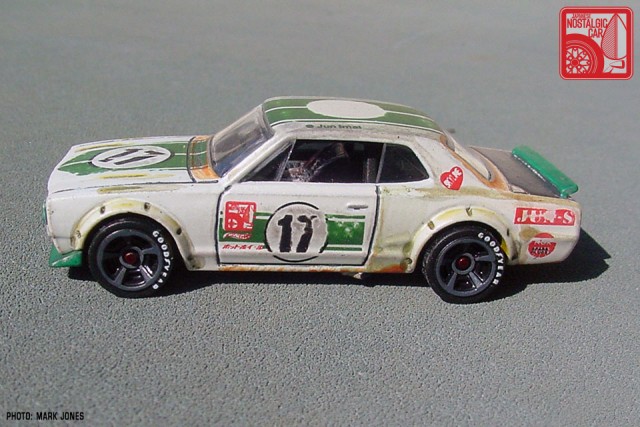 Having been run hard in its heyday, the front was sandblasted, as evidenced by the paint peel. As a result of Japan’s humidity, areas like the cowl and rocker panels saw oxidation as it sat. Under the tarp, the paint aged and flattened. Moisture accumulated near the ground and at around the front and rear greenhouse, making them prone to rust. Inside, the racing seat had deteriorated and its upholstery flaked away. 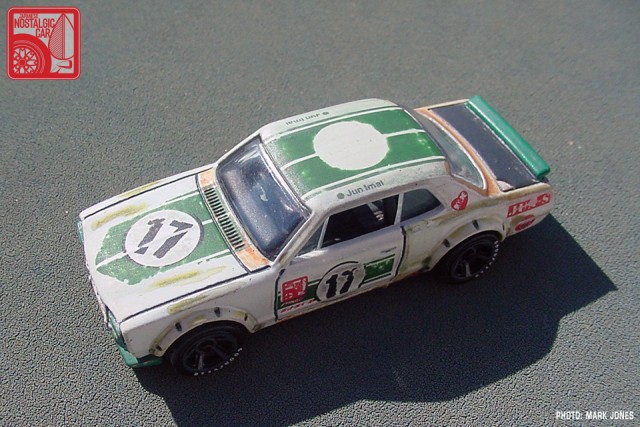 You’ll notice that the hood, doors and flares don’t have rust because they’re fiberglass, but on those areas the thin gel coat has slowly worn away, leaving the old resin below yellowed. 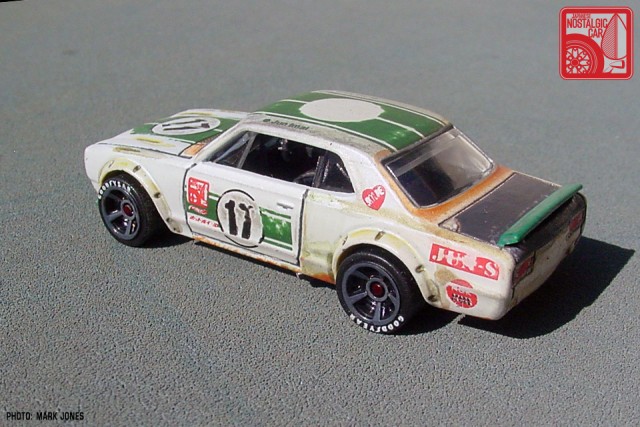 The taillight lenses were a little cracked due to age. The trunk is primered because in its heated last race, the original flew off. The undamaged rear spoiler was affixed to a replacement and mounted onto the car. 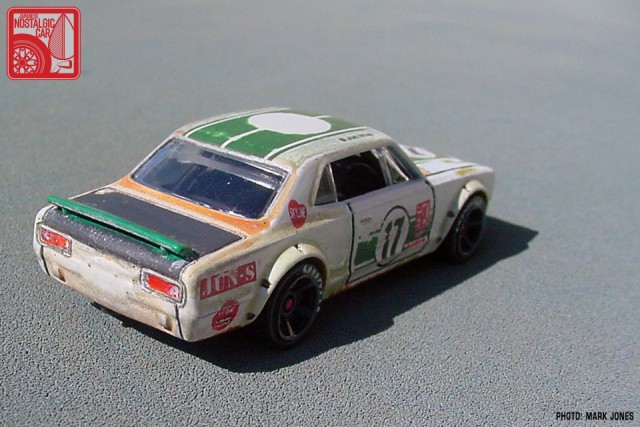 After cleaning the windshield and replacing the crazed plexiglass for safety, the car was ready for the track again, fierce as ever. Sadly, this story is only a fantasy. Nissan’s real works Hakosuka were mostly lost to history, so this is the closest we can get to imagining one survived. 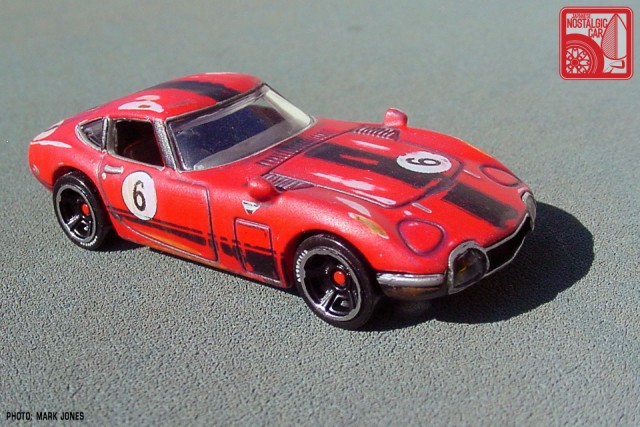 The Toyota 2000GT has its own story. Owned by a well-known privateer back in the late 1960s, it participated in many local club races and hillclimbs. From these successes, the driver was recruited to drive for the factory Toyota team in the then-new 1970 Celica. As a result, he parked the 2000GT in the lot behind his house. Back then, no one thought the 2000GT would one day be a million dollar car, 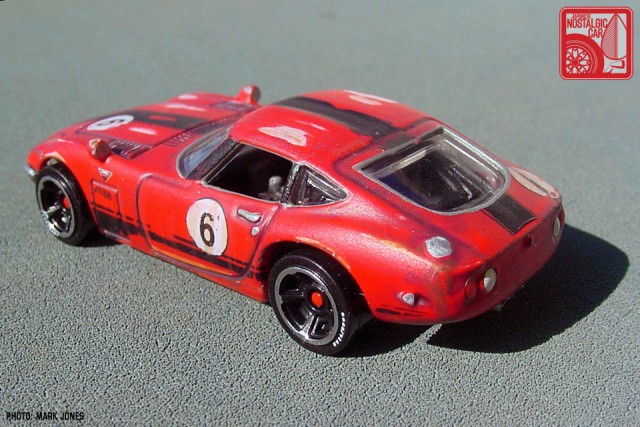 The red paint has been sun-bleached and sustains more rust than usual. The vinyl stripes were sun-dried and are now peeling and flaking. Luckily, a few years later the owner had the foresight to move it into his newly built garage, where it sat for several more decades. Fast forward to the early 2010s. The driver, reflecting on his racing career, decided to revisit where it all began. He dragged the forlorn but still complete 2000GT into the adjoining bay in the garage and started to repurpose it. 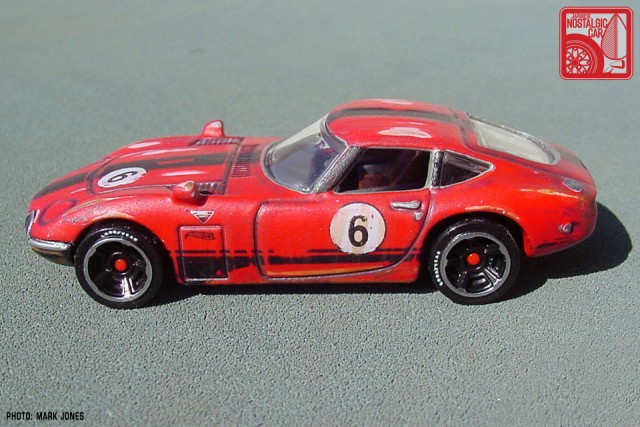 Although baked and rusted, the 2000GT is still a Toyota so it took only rebuild of the carbs and flushing the fuel cell to get rid of the varnished race gas and the engine fired right up. The brakes and suspension bushings were refurbished. The magnesium wheels originally equipped on the car had become porous and thus dangerously prone to crumbling and igniting, so brand new rims and tires were fitted. Now, it’s on its way to restoration and when it’s done it will be one of the few existing Toyota 2000GTs with racing provenance, making it worth even more. 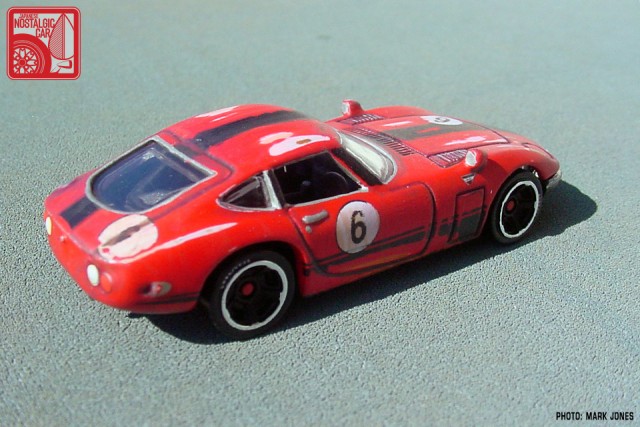 The premise of this exercise was to show that you can use what’s already existing to make fun and interesting Hot Wheels customs. There’s no need to completely repaint the car, although Scale-Master’s versatile 1:64-scale decal sheets were used for the taillights, stripes, and roundels on the 2000GT. All you need is some sandpaper, razor blades, quick-dry acrylic paints, a steady hand and some imagination.