MINICARS: This 24-karat gold Toyota 2000GT model is definitely not for kids

There is no shortage of Toyota 2000GT models in the world, but perhaps they are all too plain in white or not sufficiently capable of showing off your tremendous disposable income. Well, Japanese jeweler SGC might have a solution for you — 24-karat gold Toyota 2000GT, on sale now. 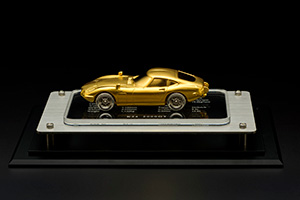 New Year is one of the most important holidays in Japan, and stores often have start-of-the-year events to draw in customers. At the high-end Matsuzakaya department store in Nagoya, that event is a “Golden World” exhibition to celebrate the dawn of 2018.

The store has also commissioned SGC to produce a small run of golden goods for sale. Most run on the traditional side — a statuette of a Buddha, a shogi set, figurines and commemorative plates featuring shibas and akitas (2018 is the year of the dog), and the aforementioned Toyota 2000GT.

Oddly enough, the site gives only one price: ¥1,296,000 (approximately US$11,500). It’s not cheap, but still less than a real 2000GT. The Golden World exhibit at Matsuzakaya Nagoya runs from January 2-8. More details can be found at the Matsuzakaya website.

permalink.
This post is filed under: minicars and
tagged: 2000gt, minicars, toyota.

3 Responses to MINICARS: This 24-karat gold Toyota 2000GT model is definitely not for kids