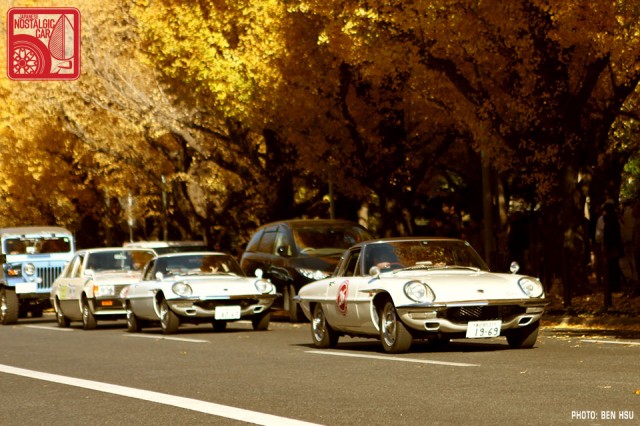 We’re extremely lucky to attend as many J-tin filled shows as we do, so it might sound like a first world problem when we say there’s always one teensy issue: The cars are stationary. That’s why when the Toyota Automobile Museum decided to host a classic car festival and parade in the heart of Tokyo, we simply had to go.

Meiji Jingu Gaien is a 175 acre park in the middle of Japan’s busiest city. It’s big enough to house all manner of sports complexes among its greenery, including a golf driving range, skating rink and two baseball stadiums. Commissioned in 1912, it honors the Meiji Era royal family for their role in modernizing Japan. When the weather is nice, it’s packed with Tokyoites looking for a brief respite from the urban jungle.

According to the official press release, Toyota held the festival “to promote and develop automobile culture and encourage interaction among car fans.” That’s as noble a reason as any we’ve heard, and those familiar with the Toyota Automobile Museum know that it contains much more than Toyotas. It’s a celebration of all cars, including those from Toyota’s rivals both foreign and domestic. Nissan even gets a shout-out as an event partner; how cool is that?

In addition to dozens of its own cars, trucked over dozens of cars the museum home in Aichi Prefecture about four hours away, Toyota invited about 100 privately owned vehicles to participate.

A Toyota 2000GT with its spiritual successor, a Lexus LFA Spyder

Not Japanese: The owner of this Lamborghini Miura revved constantly to keep it from stalling.

So on a crisp winter morning in Tokyo, we stood along one of the park’s nearby streets, an avenue lined with bright yellow gingko trees, waiting for the parade to begin. Leading the procession was a 1960 RS21 Toyopet Crown from Toyota’s own collection. Following behind was a who’s who of Nihon nostalgics — everything from a 2000GT to a Watted Fairlady 240ZG to a pair of Mazda Cosmo Sports.

Watching stunning examples of classic machinery driving was cool enough, but the fact that it was the streets of Tokyo provided an entirely new appreciation for the cars themselves. A Toyota Publica, for example, looks ridiculously small even when parked on the JCCS lawn. But when it’s mingling with a fleet of modern kei cars in a narrow Japanese traffic lane, it suddenly makes sense. Likewise, a hakosuka Skyline fits in perfectly amongst Tokyo’s rigidly geometric buildings and glass-smooth roads. It looks at home, because it is.

Toyota Proges, not part of the parade but cool nonetheless

The best part, though, was witnessing multiple nostalgics on the pavement simultaneously, fraternizing in traffic like a street scene from 1976. Ignore the Prius taxis and it was pre-Bubble Japan all over again.