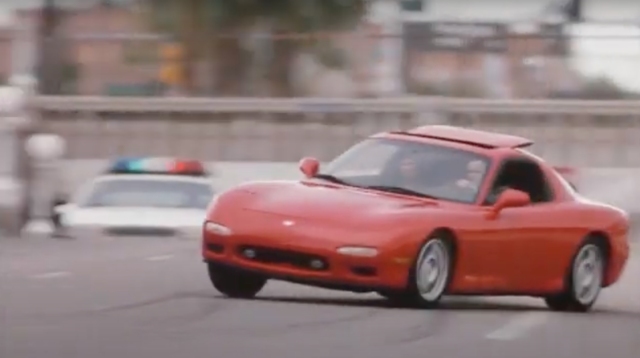 Forget Dom Toretto. The best action scene involving a red FD Mazda RX-7 comes from a far more obscure movie that also has the word “Fast” in the title, and beats the original The Fast and the Furious by seven years. In 1994’s Fast Getaway II, an RX-7 Touring leads police cruisers on a long car chase through the streets of Tucson, Arizona.

Fast Getaway II was a direct-to-video movie, which, for The Olds in the audience means that it was so bad it was deemed unworthy of a theatrical release. Instead, it just showed up on the shelves of Blockbuster Video to sucker innocent renters into spending a few bucks and a Friday night with this scintillating summary:

A former robber (whose partner was his father) has reformed and is now running an insurance business with his girlfriend. An ex-partner frames him for a burglary When his father gets out of prison, they go after the ex-partner.”

We can’t say the whole movie is worth watching, but luckily the RX-7 car chase appears right at the beginning. In fact, most of the opening credits unfold as the protagonist drives the RX-7 over some winding desert roads to a bank heist. Someone has helpfully uploaded the entire movie onto YouTube for your viewing pleasure.

It’s unknown why the RX-7 was chosen as the star car in the movie. It would have been brand new at the time of filming, and perhaps the car was just sexy — or available — enough to be given the green light by producers. Whatever the reason, it’s a huge upgrade from the car in Fast Getaway I, a Chevy Citation speeding through a world in which every car is a shade of brown.