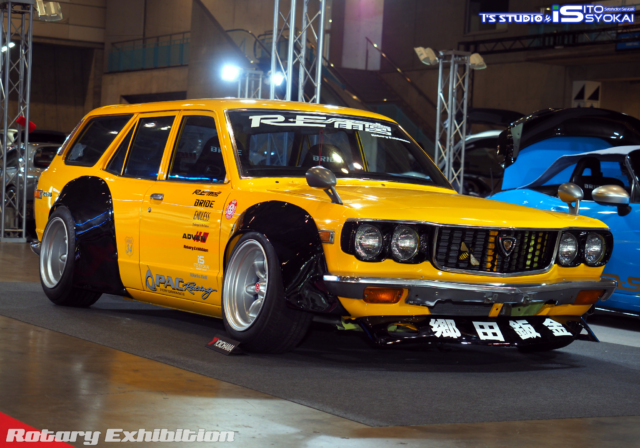 While not quite as ambitious as the 6-rotor Eunos Cosmo, another Mazda that caught our attention from the 2022 Tokyo Auto Salon was the show’s sole RX-3 Wagon. Done up in a touring car style that evokes the Savanna RX-3 race cars from the 1970s, it answers the question of what Yoshimi Katayama’s grocery getter might look like. 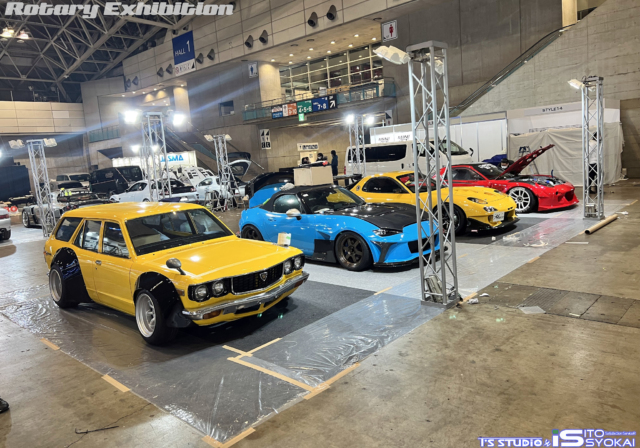 The car is powered by a Mazda 20B 3-rotor from a JC Cosmo, mated to a 6-speed manual from an RX-8, and it was clearly built to scoot. A custom Endless suspension and brake kit with 4-piston front calipers hints at a need for some serious stopping power on a car that probably weighs as much as a Miata.

Of course, the most noticeable part of the car are the enormous Katayama flares housing 15x9J-13 RS-Watanabe R-Types in front, 15x10J-25s at the rear. The over-fenders were made popular by RX-3 race cars of yore, pioneered by legendary Mazda works driver Yoshimi Katayama. Though those were coupes, the wagon interpretation makes a clever analogue for the street. Also, the paint is described as “Mazda yellow” which we presume means the iconic Competition Yellow Mica from the FD RX-7. 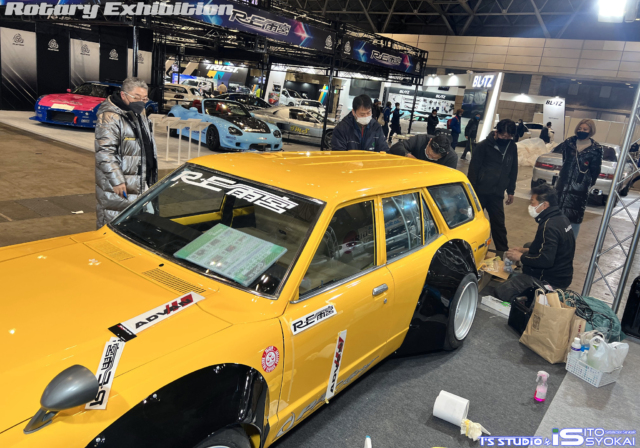 The car’s owner is associated with Ito Syokai, a rotary parts maker located. It was likely built with the help of Satisfaction Service R, Ito Syokai’s shop located in Chiba Prefecture.

RX-3s in general are extremely rare in Japan when compared with the legions of Skylines and Soarers you’ll typically see at a car show. RX-3 Wagons are basically unicorns, so it’s good to see an example at a major show like the Tokyo Auto Salon.

It was shown under the banner of Rotary Exhibition, a coalition of rotary shops started by none other than Isami Amemiya. The alliance displays their cars together at events like the Auto Salon, most of which tend to be heavy with Toyota, Nissan, and Honda cars. They operate under the principle that having a large grouping of Mazdas, as opposed to small shops getting their cars scattered throughout the convention center, helps increase visibility for rotary cars. This year the RX-3 certainly brought them some extra eyeballs.