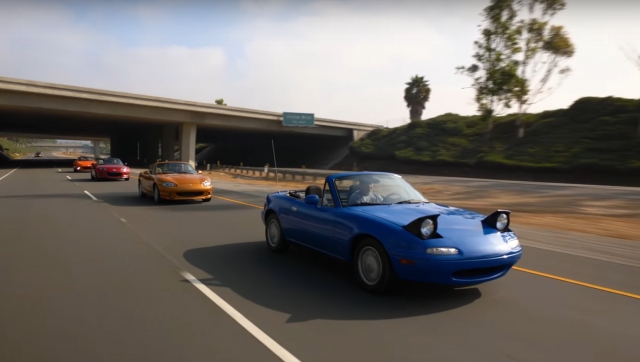 At this point we all know that the Mazda MX-5 Miata is a very special car. Despite four generations and 30 years in the books, it is one of the last enthusiasts’ cars left that remains pure to its original mission — to provide a superbly engaging driving experience that connects you to your car. For its 30th anniversary, our friends at Savage Geese have created a wonderful five-part documentary chronicling the development of this singular machine. If you already love Miatas, you’ll love them even more after watching it; if you don’t, this may just nudge you into the Miata cult.

Episode one is a preview that sets the stage for three chapters, one each for generations NA to NC. The videos interview a few of the individuals responsible for the Miata, including Tom Matano, James Kilbourne, Ken Sayward, and Dave Coleman. Hearing them speak about how the car came to be, it really hits home the fact that it was a dream team of passionate enthusiasts, not beancounters or marketers, who made the Miata what it is.

The team was given a ridiculous amount of freedom to create what they wanted. It was exactly the right people, time, corporate climate, and general automotive zeitgeist, a perfect storm. I’ve owned six NA Miatas, including one that I kept for 25 years, and this brought back many memories. This chapter shows just how magical it was, the way the team was able to coalesce and create an legend.

It also features the Mariner Blue serial number 00014, the earliest Miata in Mazda’s collection. Back when we drove it for our 25 Year Club retrospective, it had 8,303 miles. In five years it gained just 900, and it’s good to see that it’s still running strong.

In the NB chapter, Ken Sayward shares amusing anecdotes about his time working on the design team of the second-gen. While still working for his previous job at Chrysler, he bought an NA and got a good ribbing from his colleagues. At the time, the Chrysler LeBaron was considered the market leader.

After moving to Mazda, Ken was tasked with working on the NB, and challenging task considering the NA had become an instant icon. By then, having seen the success of the Miata, every automaker was developing a convertible of some sort — the Audi TT, Porsche Boxster, Honda S2000, BMW Z3, Mercedes SLK, Mitsubishi Eclipse Spyder, Saturn Sky, the list goes on and on. Each one thought they would beat the Miata at its own game, but the video explains why they never could, and why the Miata is still the best-selling roadster of all time.

Created under a period of Ford ownership of Mazda, the NC was beleaguered with business constraints that probably would have killed off the car in any other company. Chassis engineer Dave Coleman dives deep on all the ways the team was able to keep the NC true to the Miata lineage despite pressures from above. The NC is by far the most controversial Miata, but even purists will probably come away from this episode with a newfound appreciation for the chassis.

These are just a few of the insights included in the documentary. Beautifully shot and chock-full of information, if you love cars this series is definitely worth watching.