COLLECTIONS: The oldest surviving Mazda rotary car in the world, and its nod to Hiroshima’s nuclear past 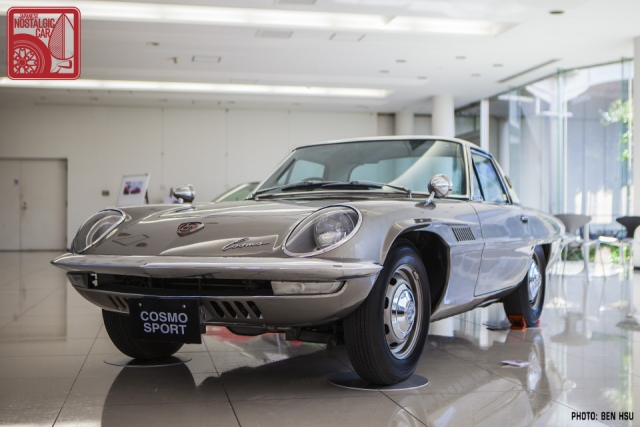 What comes to mind when you hear the words “priceless artifact”? Ru ware of Imperial China? Paleolithic paintings of the Chauvet Cave? In the automotive realm it’s historically significant race cars, unique or outstanding examples of production cars, and serendipitously preserved prototypes. This last category is particularly fascinating. Not only do such cars provide physical connections to an otherwise intangible part of the past, but often their preservation alone is an improbable miracle. We recently got to see one such remarkable automobile: a pre-production Mazda Cosmo Sport prototype. 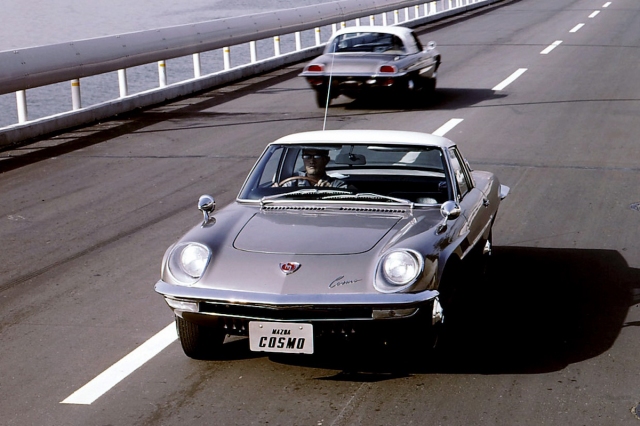 Imagine, if you will, Japan in 1963. The majority of regular folks, if they even own cars, are driving lilliputian Subarus, quaint-looking Datsuns, and rickety 3-wheeled Daihatsus. Suddenly, from the mist, a new shape appears. Low-slung and sleek, and with a streamlined silhouette that conjures a jet fuselage, it’s unlike anything else on the road. What they’ve just witnessed is a Mazda Cosmo Sport prototype. 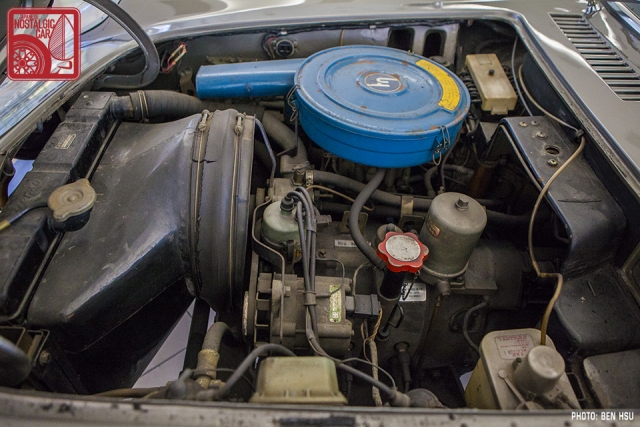 Not only did it look alien, it housed a never-before seen type of motor — smaller, smoother and with no pistons. The rotary engine was a technological holy grail in itself. Engineers had long dreamt of a non-reciprocating engine to save energy and slash the number of parts needed to build it. With Mazda’s spaceship, the future had arrived, and it had come from Hiroshima. 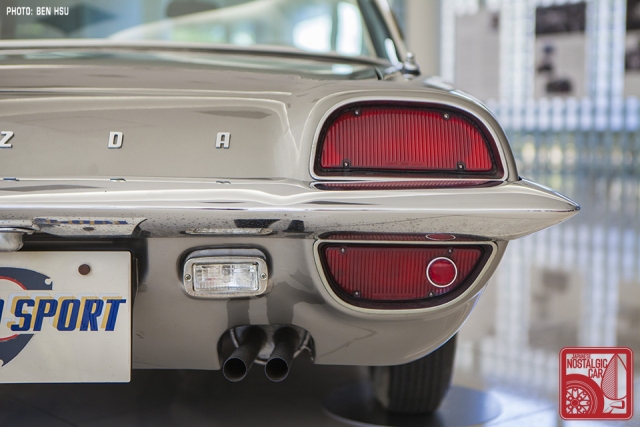 The Cosmo Sport, along with Mazda’s rotary engine, celebrates its 50th anniversary this year. Delightfully, as early as four years before the Cosmo Sport entered production in 1967, Mazda was freely showing prototypes to the public.

As development advanced, Mazda launched an extensive real-world testing program in 1965. It sent 60 pre-production prototypes to dealers all over Japan. Together, they racked up approximately 375,000 miles’ worth of data to help improve the production version. 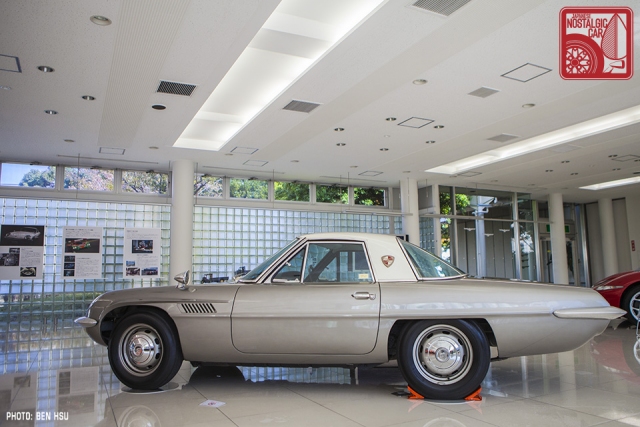 Standard practice for pre-production prototypes typically is as follows: after all the numbers and stats are crunched, so are the cars themselves. It’s the only way to ensure they don’t become a liability, should they or bits of them end up on the secondary market. Plus, it’s a lot easier than storing them. Rarely would a company preserve test mules, especially a Japanese firm of that era.

Amazingly, however, Mazda kept one. It’s in Japan, but it’s not very well known, and isn’t even in the Mazda Museum in Hiroshima. If a production Cosmo Sport is Mona Lisa at the Louvre, this is an early Da Vinci sketch sitting in Florence. It’s the oldest known Cosmo Sport in the world — making it also the oldest known Mazda rotary car in the world — and we went to see it. 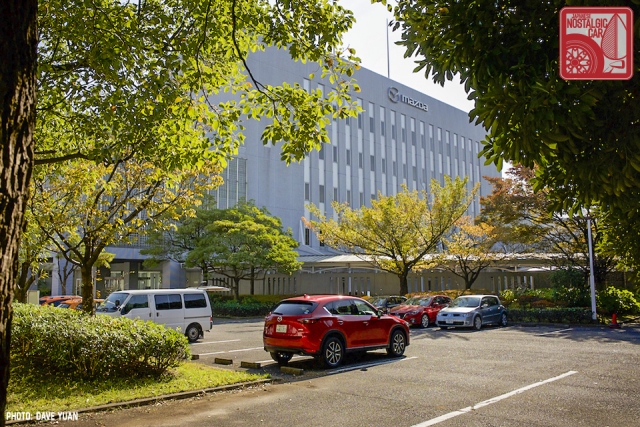 The car resides at Mazda’s Yokohama Research & Development Center, about an hour south of Tokyo. The center is located along a set of train tracks in a fairly industrial area of Kanagawa Ward. For decades, it was off limits to the public. These days, the most top secret stuff is conducted elsewhere, so its courtyard is sometimes used to host press events and enthusiast gatherings.

Entering the building was like stepping back in time. Delicate mid-century arches, large-paned windows, and reflecting pools adorn the facility, looking like an office that might have once housed Japan’s equivalent of Sterling Cooper. It was the perfect environs for an exemplar of 1960s design.

The car carried the serial number of 1035, which means it’s likely number 35 of the original 60. It had patina, wear, and dust in the nooks and crannies, but the car remained unrestored and remarkably well-preserved.

Charmingly, green embossing tape with the car’s number could be found throughout — above the speedometer and at an inside corner of the windshield — while a metal plate stamped “10A-1035” had been stuck to the engine. The 60 original prototypes were outfitted in three different states of engine tune, depending on the region of Japan they were sent to, but we don’t know where this one was first tested. 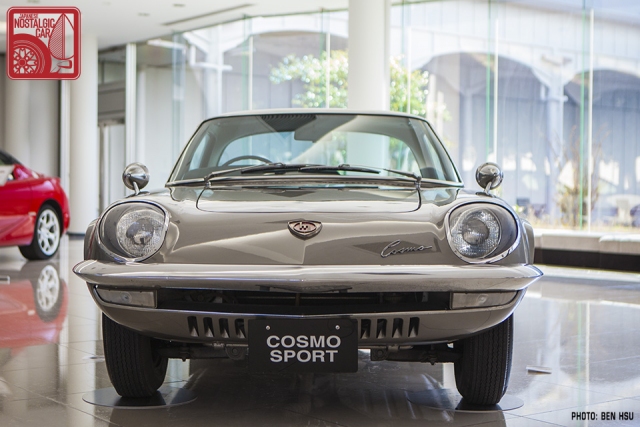 Being pre-production, the prototype differed from the standard Cosmo Sport in a number of ways fascinating to the Mazda otaku. The most noticeable was of course the color scheme — a body in pewter gray with contrasting white roof. All production Cosmos were initially white, but the solid gray is both pleasing and of the period. 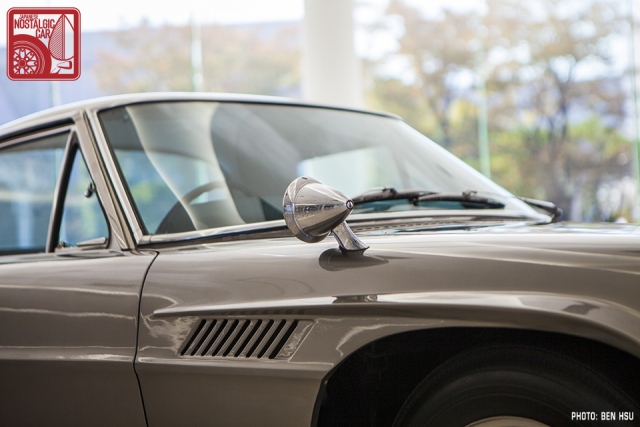 Minor exterior details unique to the prototype abounded, including absent side markers fore of the fender gills, and one-piece chrome bumpers with more pronounced and sculpted curves.

We pored over and photographed the priceless piece of Mazda history, all the while trying to be respectful of the “Do Not Touch” signs in the window. Then one of our minders walked over. The gentleman spoke no English, but he pulled the driver’s side handle, opened the door, and gestured with an open palm. 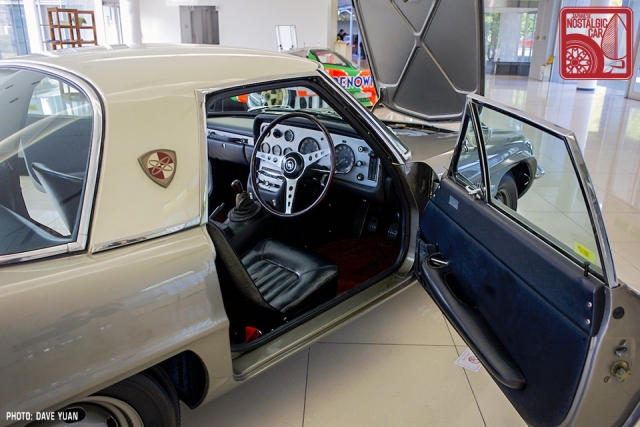 As a life long Mazdafarian, I could scarcely believe it. I couldn’t say no, but climbing in was a challenge (I’m 6’2″). I carefully contorted my feet, holding onto my size twelves to keep them folded for fear of scuffing a panel. Once in, I fit fine, but barely. Had he let me, I would have totally been able to drive it. 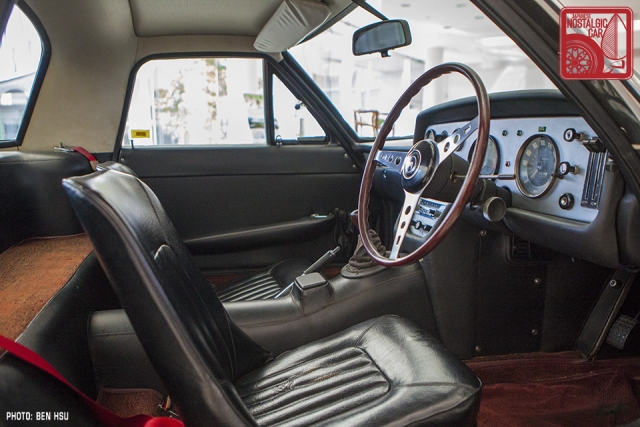 The low-back bucket seats lack the production car’s houndstooth inserts and were fully covered in vinyl instead — vinyl which still smelled of 1966. The dash layout diverged as well, with a bare metal silver panel housing the gauges in a slightly different arrangement. Curiously, the seat belts were red, perhaps to go with the red carpet (the one detail that matched the production car). It felt like the cockpit of a vintage aircraft. 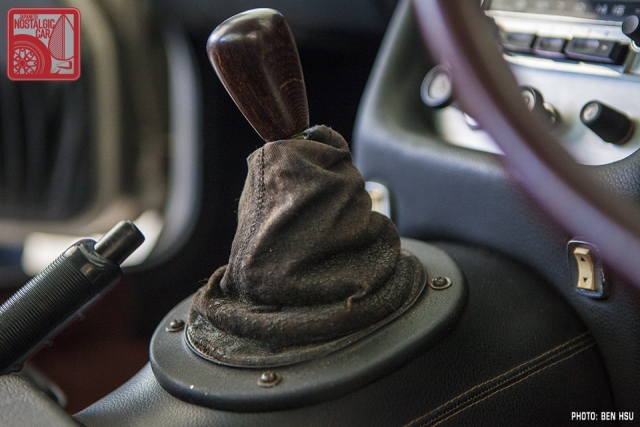 Actually, it was more like the original Apollo capsule. The cabin was well used, the touchable surfaces worn, but each flaw bore the weight of history in the making. It was surreal. The feeling was hard to describe. It’s as if someone had handed you that aforementioned Mona Lisa sketch, something you’ve read about and loved all your life, and then all of a sudden it was in your hands.

The door cards probably differ the most from production, with a somewhat unconventional door pull integrated into the arm rest. A surprising feature was the electric window lift with the switches mounted just in front of the shifter; production Cosmo Sports have hand-cranked windows. Last but not least, the emblem on the steering wheel was a big round stylized M in black, as opposed to the production’s red rotor emblem. 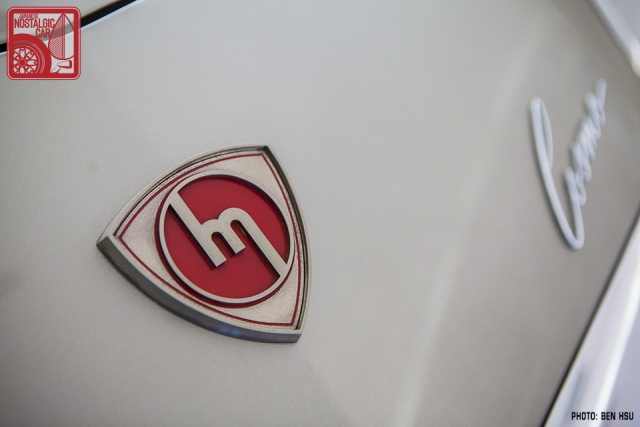 Speaking of emblems, at the nose was a large and flat metal badge in the familiar rotor shape. The encircled M, however, was red rather than blue, similar to the steering wheel emblem on the production car. 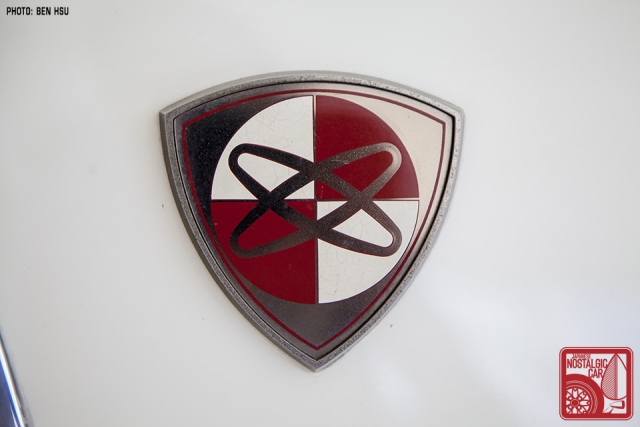 The most striking insignia, however, was the one affixed to the B-pillar: a rotor shield with a checkered circle background and the Rutherford-Bohr atomic symbol, the de facto representation of nuclear energy.

As you must know, Hiroshima was the first city in history to be targeted and attacked by a nuclear weapon. In the aftermath, Mazda played a key role in immediate relief response as well as the reconstruction of the city. 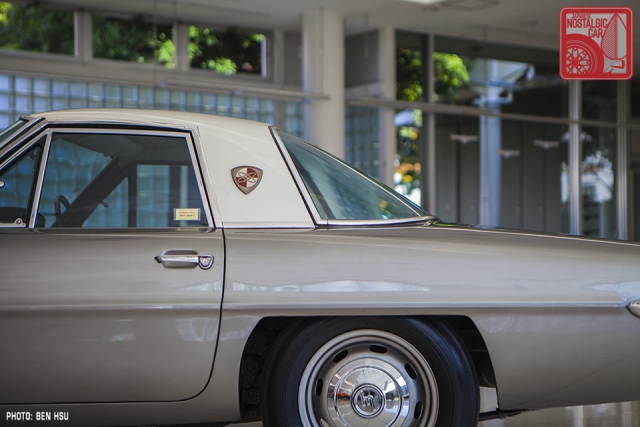 Our appointment with the prototype followed a trip to Hiroshima, including a visit to the Peace Memorial Park and Museum. On the heels of that somber visit, the spirit of optimism and undefeatable grit embodied by this badge was extremely moving and inspirational. It was actually emotional to see this tribute to the colossal challenge Mazda overcame in bringing the rotary engine to life. 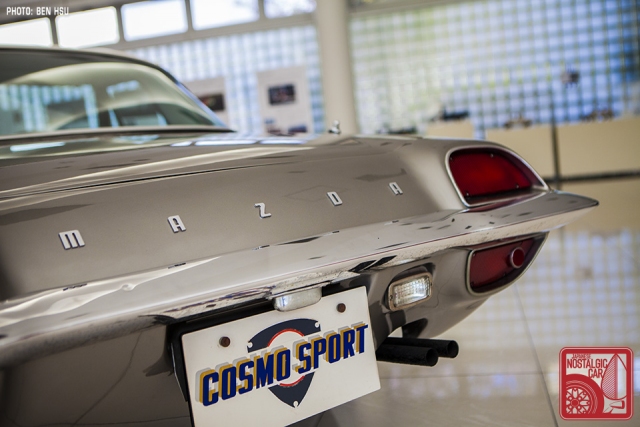 These days, the R&D center focuses mostly on engineering work. It was thus particularly encouraging to see this prototype Cosmo inhabiting the foyer showroom along with a dream-like lineup of other rotary Mazdas. 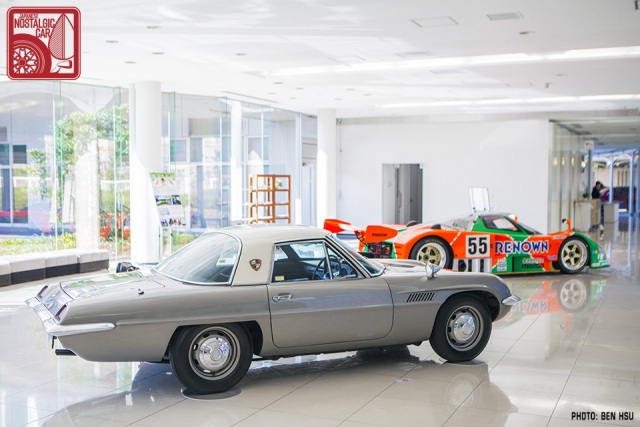 It was a genuine honor to pay our respects to this 51-year-old machine, a wonderful piece of Mazda and automotive history, and perhaps the holy grail for Cosmo lovers. The car is almost certainly the only one of its kind in existence, truly a priceless rarity.

Seeing it, smelling it, and sitting in it gave me a physical connection to that time of Japan’s boundless optimism and innovation. The rotary engine was the engine of the future, the Cosmo Sport a car the world had never seen before, and this one begat them all. 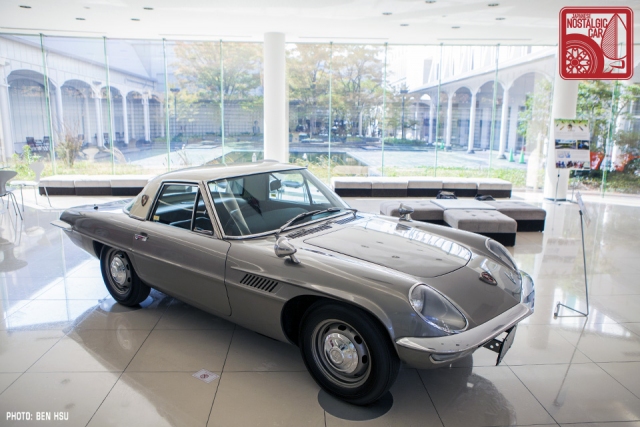 At first, we wondered why the car wasn’t in Mazda’s Hiroshima Museum. It’s certainly worthy of being there. But instead, it lives in an R&D center where few can see it. The people who do, however, are the creators of future Mazdas. They pass it every day as they report to work. Sitting there, it serves as a daily reminder of the of the company’s heritage, spirit, and potential.

Perhaps, then, there is no more a fitting place.

20 Responses to COLLECTIONS: The oldest surviving Mazda rotary car in the world, and its nod to Hiroshima’s nuclear past