The 19th century naturalist Henry Walter Bates discovered caterpillars in the Amazon with gigantic heads resembling those of pit vipers. This type of mimicry is a clever and effective means of survival, but can it work on cars? Given the continued popularity of various “retro” designs — Mini, Mustang, Beetle — the answer is apparently yes. In this series, we’ll check out some of the less known examples of retro-inspired cars along with the JNCs they mimic.

These days, the fame and classic stature of the Mazda Cosmo Sport is perhaps second only to that of the Toyota 2000GT. Historically-speaking, the original Cosmo was important for having the world’s first production twin-rotor rotary engine (NSU began producing its twin-rotor Ro80 in the same year, shortly following the Cosmo Sport). 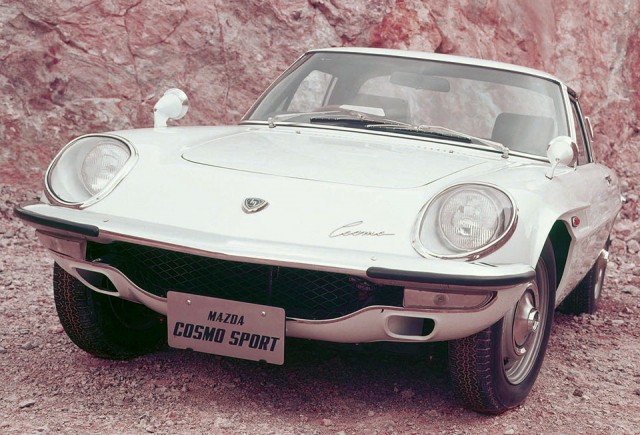 Its role as a striking and contemporary halo sports car also foreshadowed the sporting spirit of Mazda’s rotary engine. It was one of the first full-on sports cars from a Japanese manufacturer at a time when high regards went mostly to European and American cars. And what a sports car it was! It may not have been as low-slung and intimidatingly sensuous as the 2000GT, but the Cosmo Sport was certainly modern and sporty.

Befitting its name, the appearance evoked that of a spaceship, especially its afterburner-like quad binnacles taillight housings. The elongated tail and greenhouse of the cabin also bore semblance to a small airplane, with an appropriately aircraft-like dashboard inside abounding with gauges. 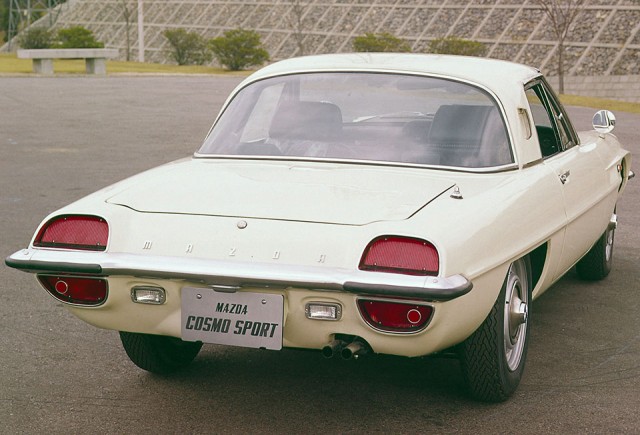 The Cosmo Sport was in production from 1967-72. Sold in Japan and a few European countries (as the 110S), it was Mazda’s high-profile flagship. To generate buzz for its newfangled rotary engine, Mazda entered two Cosmos in the 1968 Marathon de la Route. This was a grueling 84-hour (that’s right, 84!) endurance race at the Green Hell, West Germany’s Nürburgring. Impressively, while one car retired due to suspension problems with only two hours left in the race, the other car finished fourth overall. Try doing that with a rotary NSU. The Cosmo Sport thus kicked off Mazda’s long and illustrious rotary engine racing legacy, and the Cosmo name would live on to mid-‘90s as Mazda’s range-topping GT.

Throw a photo of the Cosmo Sport on the internet nowadays, and inevitably comments appear yearning for its return. This sentiment seems shared by some within Mazda as well. During the FD3S RX-7’s design phase, an early concept from Hiroshima was a clear reimagining of the Cosmo Sport.

The profile of Cosmo Sport’s back glass — fast sweep, flush at the bottom against the trunk lid, and wrapping around the pillar — also seems to be a design favorite at Mazda. It has graced, for instance, the RX-8, NC Miata’s hardtop, Millenia, and, appropriately, the Eunos Cosmo. Yet, we see no sign of interest in a Cosmo Sport successor.

Actually, this is not quite true. At the 2002 Tokyo Auto Salon, Mazda displayed a concept called the Cosmo 21 under the M’z IF banner. A subsidiary of Mazda, M’z IF was led by Shigenori Fukuda, Mazda’s former General Manager of Design during development of such iconic cars as the original Miata and FD3S. Its most famous creation was perhaps the NB Roadster Coupe, the first prototype of which was shown at the 2002 Auto Salon as the RS Coupe.

Both the RS Coupe and the Comso 21 were developed by M’z IF and constructed by Mazda Sangyo, yet another Mazda subsidiary. Similar to Nissan’s Autech, it is now known as Mazda Engineering & Technology and, among other activities, distributes accessories under the label M’z Custom.

The Cosmo 21 was an outright stylistic redux of the Cosmo Sport. Based on the NB MX-5, it was a two-seat hardtop coupe with exterior design mimicking that of the original rotary flagship. The glassed-over headlights were there, as were the “Cosmo” script emblem, fender mirrors, horizontal character lines above the front wheel wells, and fender vents and indicators. The tail was elongated and housed the familiar quad binnacles, the taillights within even more evocative of rocket afterburners. 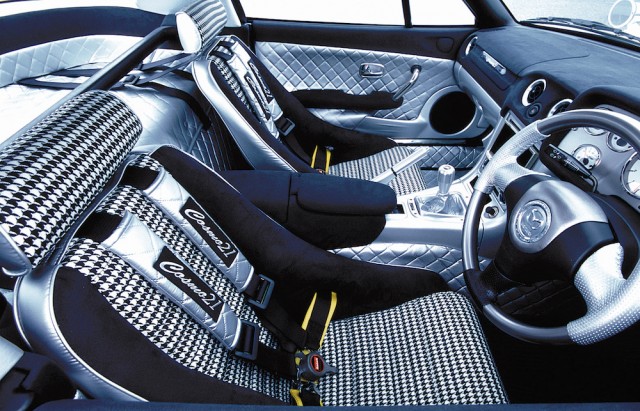 Inside, the seats were covered in houndstooth pattern like the Cosmo Sport’s, while much of the cabin was clad in a spacesuit-like shiny silver. Appearance-wise, this was a comprehensive attempt to stay faithful to the original. Of course, it had the requisite rotary power: the upcoming RENESIS 13B-MSP. If you ever fantasized about a rotary-powered Miata from Mazda, this was as close as it got.

The Cosmo 21 may seem a bit of an odd concept car. Being shown at the TAS meant that it was geared towards the home market; the Cosmo Sport simply was not as well- known and appreciated internationally back then. The Cosmo 21 did have a bit of a custom car feel to it. Clearly recognizable as a Cosmo Sport for the 21st century, parts of its body nevertheless seemed a bit bulbous and busy. The wheels looked more fitting on the Ultraman MAT vehicle (which the Cosmo Sport once served as), and the color scheme was all that disguised the NB interior.

It certainly was a fun and exciting showpiece, but overall one might characterize the design as more indulgent than refined. However, the key is to recognize that the Cosmo 21 was put forth as a playful variant of the NB Roadster alongside the RS Coupe, not the rebirth of a flagship. Seeing it in that light, the Cosmo 21 is quite cool and lovable, one of those concepts cars you might desperately want to take home.