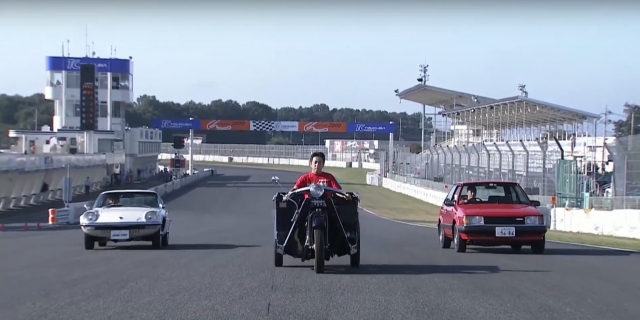 Many automotive journalists don’t even own cars. Why do that when you are supplied by a never-ending stream of press loaners that show up in your driveway every week? However, if you were to poll all the journalists, you’d probably find that the car most owned by this strange breed of human is the Mazda Miata. It handles well enough to excite after doing time in a slew of numbing SUVs. It handles well enough to excite after thrills in six-figure luxury sports cars. And, most importantly, it’s reliable enough to own on a scribe’s meager salary. That’s probably why in Japan Mazda has held a yearly 4-hour endurance race for journalists every year since the Roadster’s introduction in 1989.

The Mazda Media 4 Tai enduro sees teams from all the big name Japanese magazines compete alongside teams of Mazda employees. There’s Option, Hot Version, Best Car, Driver, Motor Fan, Le Volant, Car Top, and this year’s winner, Tipo/Daytona. It’s all in good fun. Last year, even Toyota entered a team with none other than CEO Akio Toyoda as one of the drivers. However, this year because the 24 Hours of Le Mans was postponed to the same weekend, Toyoda had other obligations.

In the past the event welcomed spectators, but due to the coronavirus this year it was held without audience. However, it was still Mazda’s 100th anniversary, so before the race began Mazda brought out some of its classics from its Hiroshima museum for a parade lap around Tsukuba Circuit (1:06:00 in the video above). Cars that took a lap included a R360, Cosmo Sport, BD Familia and, impressively, a still-running 1947 three-wheeler truck. And if you want to watch a bunch of identically prepped ND Roadsters going head to head, there’s many hours of that as well.