One of the greatest names in Japanese motorsports has died. Kunimitsu Takahashi, motorcycle rider and automobile racing driver, passed away on March 16 at the age of 82. In the final years of his life, Takahashi had been battling lymphoma. Though perhaps best known for his career as a factory Nissan driver during the legendary Hakosuka GT-R’s heyday, and later as a manager of Honda’s Raybrig NSX SuperGT team, the lesser known chapters of his life are just as fascinating. 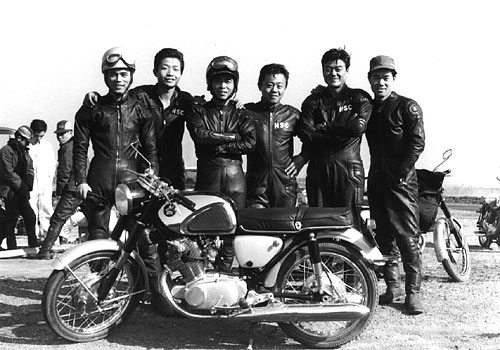 Kunimitsu was born in Koganei City, Tokyo on January 29, 1940. By the time he was a teenager, he was well on the path to becoming one of the most beloved figures in Japanese motorsport. In 1958, at age 18, he made his racing debut at the inaugural All-Japan Clubman Race, an early contest for motorcycles at the dawn of Japan’s motoring age.

With his BSA Gold Star, he handily won his class in his very first race. Though he entered in the under-350cc Junior Class, it is said that Takahashi’s average speed was faster than even that of the over-350cc Senior Classes. He returned the following year and won the 500cc class, and by the time he was 20 years old Takahashi was already one of Japan’s top riders.

Takahashi held Soichiro Honda in high regard, and soon his skills caught the eye of Honda, who was looking for talent for his company’s nascent international racing program. In 1960 Takahashi signed on with the company’s works team, securing a ticket to the world at a time when Japan did not yet to have a single paved circuit to call its own. In an interview last year, he recalled marveling at Europe’s motoring infrastructure, not only in terms of high-speed tracks, but also its web of asphalt roads to even the smallest hamlets. 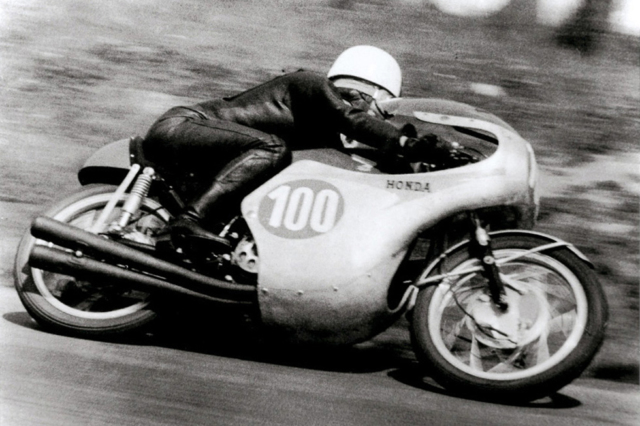 The following year, despite his inexperience, Takahashi became the first Japanese to win a Grand Prix race. Riding his Honda RC162, he took the checkered flag at Hockenheim to win the 250cc class at the 1961 West German Grand Prix.

Takahashi returned the following year, but what started as a promising season quickly turned tragic. Coming off two consecutive class wins at the Spanish and French Grands Prix, he was poised for stardom at the 1962 running of the Isle of Man TT, the toughest motorcycle race in the world. However, a violent near-death crash in which Takahashi lost consciousness for a period led to his retirement as a motorcycle rider. 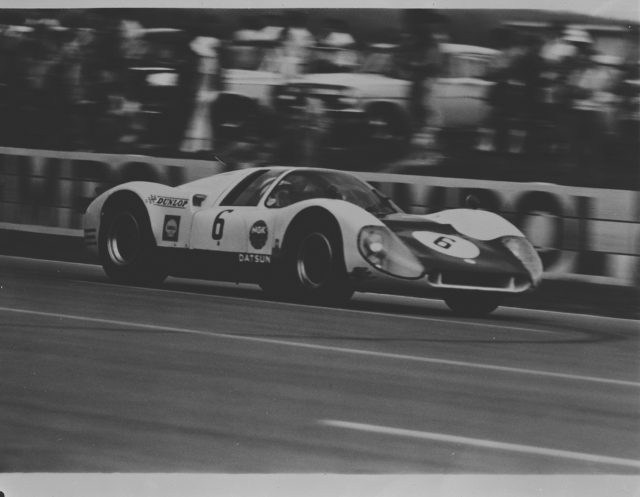 His racing career, however, was just getting started. Along with fellow rider Moto Kitano, Takahashi signed on with Prince Motor Company to drive the R380, the purpose-built race car that PMC hoped would defeat Porsche after the Skyline 2000GT briefly tasted triumph at the 1964 Japan Grand Prix.

He was nearly the man to do it too, at the 1967 Japan Grand Prix. In one of the most memorable performances of his early career, Takahashi, driving a post-merger Nissan R380A-II, had reeled in Tetsu Ikuzawa’s first place Porsche 906. Flashing his headlights playfully, Takahashi pushed the Nissan nose-to-tail against the Porsche when a missed downshift by Ikuzawa sent the two spinning into the runoff in order to avoid contact. Ikuzawa restarted first and pitted to check for damage and refuel. Takahashi’s car took longer to restart, and by the time he pitted a one lap delay had nixed any chance of catching up again. But, his performance had endeared him to fans.

It was an oft repeated theme. In fact, through much of the decade, Takahashi would earn the unofficial title of mukan no teiou or “uncrowned emperor”. He was widely regarded as one of the best, if not the very best, driver in Japan. But despite frequent pole positions, wins due to bad luck or mechanical issues consistently managed to elude him. 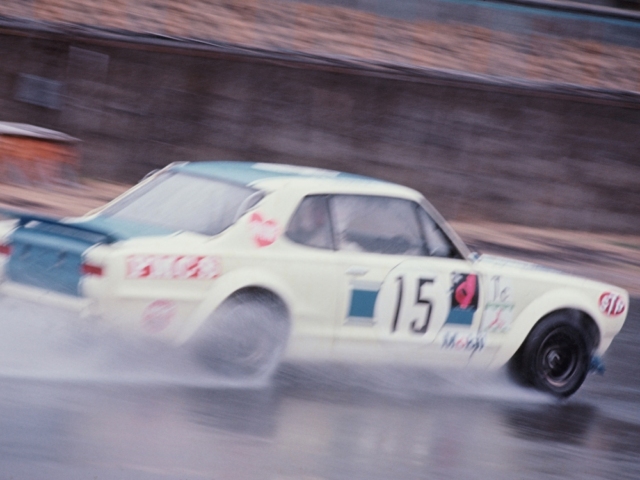 Takahashi is best remembered, though, for his time behind the wheel of the Nissan Skyline GT-R. At the zenith of Japan’s first touring car era, Kuni-san, as he was nicknamed, along with Kitano and Motoharu Kurosawa, came to be known as the Oppama Works Miragurasu (Oppama was a factory from which Nissan developed many of its race cars, and miragurasu is literally “three crows” but in meaning is akin to the Three Musketeers).

The trio led the GT-R’s dominance of various touring car series, cementing a legend status that carries on to this day. In fact, it was Takahashi himself who won the March 1972 Fuji Grand Champion 300km race, giving the Hakosuka GT-R its 50th victory in three years and immortalizing the nameplate as one of the most storied in automotive history. 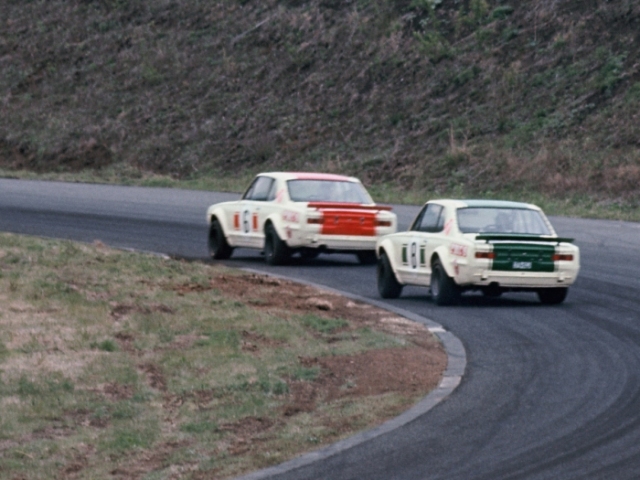 The Grandfather of Drifting

However, it was something else that Takahashi did during this time that changed car culture forever. During some races, he began to purposefully throw his GT-R into turns in a way that broke traction on all four wheels. Not that old bias-ply tires had much adhesion to begin with, but Takahashi demonstrated skillful car control with these antics, maintaining a racing line while seamlessly transitioning between grip and slide. Unbeknownst to him, Kunimitsu Takahashi had invented drifting. 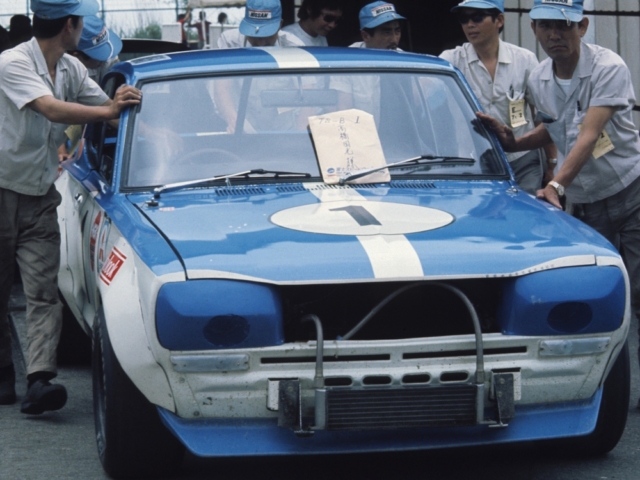 Compared to his wins these brief displays probably seemed trivial at the time, but the theatrics captured the attention of countless fans, among them a young Keiichi Tsuchiya. Decades later, the Drift King would go on to host hugely influential shows like Best Motoring and Hot Version that were exported around the globe during the height of the Tuner Era, help establish the world’s first sanctioned drifting league, and even consult on Hollywood movies that brought drifting to the non-car otaku mainstream.

Though Tsuchiya popularized the sport and is rightly called the Father of Drifting, that makes Takahashi its grandfather or godfather. In the meantime Takahashi continued racing, in everything from F2 to F3000 to the All Japan Endurance Championship, where he won the series three consecutive years in a row driving the Advan Porsche 962C. He even helmed a Tyrell in a single Formula 1 race in 1977. 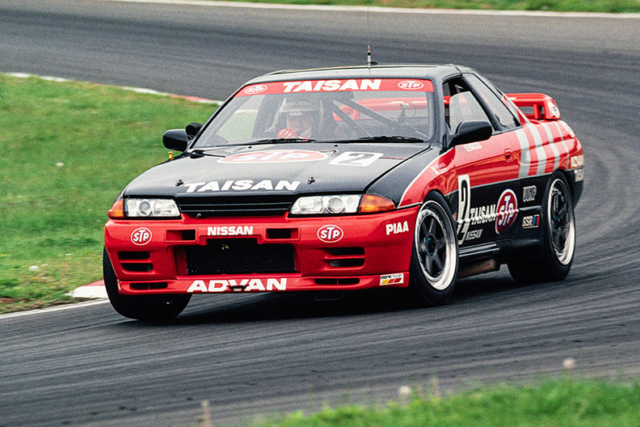 In 1989 Nissan revived the Skyline GT-R with the R32 chassis. The car would go on to dominate the All Japan Touring Car Championships, or JTC, continuing its ancestor’s success by winning every race it entered in the four years it competed. By now Tsuchiya had become quite an accomplished professional driver himself. And in a fairy tale turn of events, when Takahashi established his own racing unit, Team Kunimitsu, in 1992, the ended up selecting Tsuchiya to co-drive the same Team Taisan Advan Skyline GT-R. 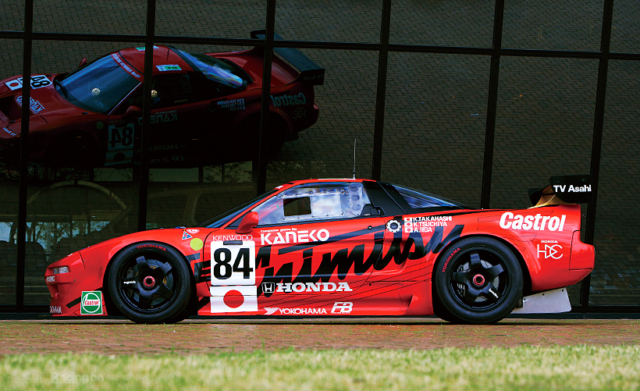 It was a dream come true for the Drift King and together, disciple and hero, campaigned the GT-R until the end of JTC in 1993. After that, the duo teamed up on several endeavors, including an effort at the 24 Hours of Le Mans. That paid off in 1995 when Kunimitsu, Tsuchiya, and Akira Iida won the French enduro’s GT2 class with a Honda NSX, the first time an all Japanese team had done so in a Japanese car.

Takahashi continued to race as Japan’s premier touring car series evolved into JGTC, then SuperGT. Starting in 1997 Raybrig became his team’s primary sponsor, and his distinctive blue NSX was a fixture in Japanese racing for almost 25 years. Kuni-san drove his last race in 1999, finally retiring at the age of 59 to focus on managing his team. Under his leadership, they would win the series championship in 2018 and, in spectacular fashion, 2020. 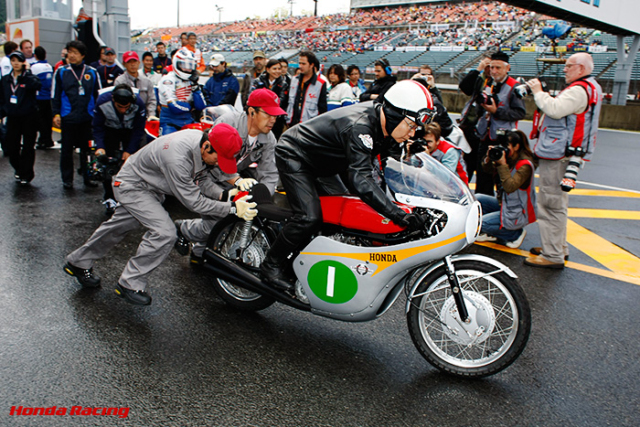 Though he was formally retired, Takahashi continued to drive and ride at motorsports festivals, often paired with machines he once piloted competitively. In 2011, at the Legend Cup, a non-season round of SuperGT cars, he even passed Satoru Nakajima despite being in his 70s. 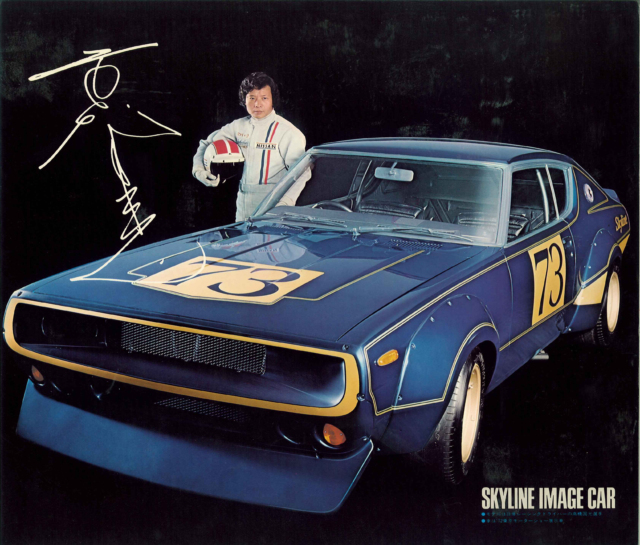 Takahashi lived a storied life, but one race among the 489 that he participated in stands out: March 6, 1977, the opening round of the All Japan F2000 Championship at Suzuka Circuit. Takahashi was holding first place going into the penultimate lap when the second-place driver Kenichi Takeshita, crashed behind him and impaled his car on a guardrail. Takahashi immediately pulled over and ran over to the wreckage to help his fellow driver, seemingly giving up the chance to nab the checkered flag. 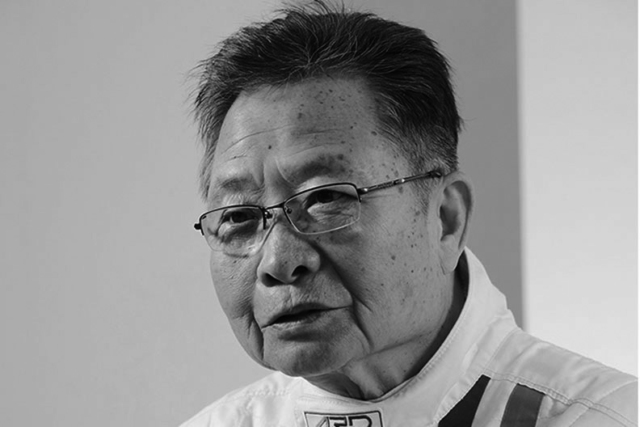 Both the race marshals and Takahashi’s rival drivers were deeply moved by this act of selflessness. What unfolded next could have come straight out of a movie script.  Subsequent drivers, witnessing Takahashi’s kindness, one by one all stopped their cars to follow him and aid Takeshita. Officials ended the race on a red flag, meaning the positions right before the crash would stand as the final result. So even though Takahashi didn’t technically finish the race, he still won.

Takahashi was a human first, then a racer. He was at the crest of Japan’s first wave of racing heroes, writing the legends that would inspire a generation. He will be missed.

3 Responses to Kunimitsu Takahashi, legendary racing driver and grandfather of drifting, dies at 82