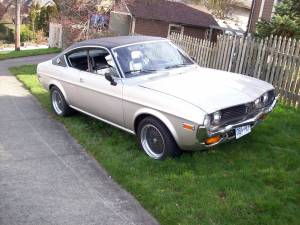 It’s not a limited edition, nor does it have  a slew of rare options, but we at JNC have a soft spot for the 2nd-gen Luce. They’re just rare in general and although much maligned when new, 38 years later it’s a beautiful reminder of pre-NHTSA safety bumper design.

This 1974 Mazda RX-4 is located in Victoria, BC and while not an original-owner car, it has resided in the same garage for 20 years. Light mods have been made, but you wouldn’t know it from looking at it — exactly the type of tuning we dig. The engine is said to have only 700 km on the rebuild and included are some rare Racing Beat bolt-ons. The asking price is $8,500.

permalink.
This post is filed under: for sale, mazda and
tagged: kidney anyone, luce, mazda, racing beat, rx-4.