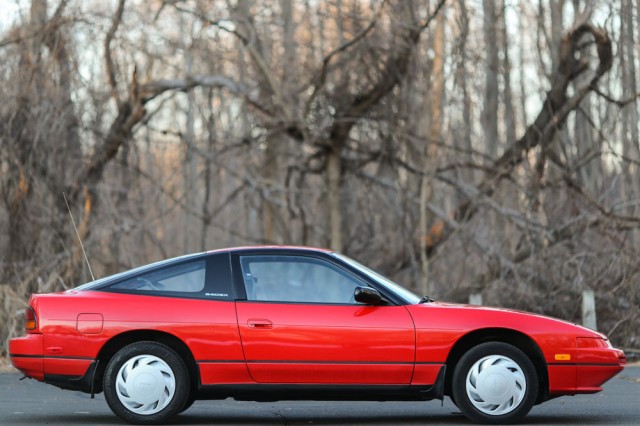 We’ve lamented the fact that AE86s have nearly all been drifted into oblivion, but what about its cross-town rival? The Nissan 240SX sold in larger numbers, but finding an unmolested one can still be a challenging proposition these days, especially when it’s a one-owner car with less than 44,000 miles on it.

Someone near Philadelphia, Pennsylvania has shown a 1990 Aztec Red S13 quite a bit of brotherly love. The paint looks flawless in photos, and even its aero disk hubcaps show nary a spot of curb rash. What’s more, this is no secretary’s special; transmitting power to its rear wheels is a 5-speed manual.

US-market versions came equipped with a KA24 “truck” motor instead of  the revvy SR20 turbos found in Japanland, something to do with our love of torque decades before anyone in the states thought sliding the tail out in tight turns would supplant stoplight drags as the hoon move of choice among the youth.

Pre-facelift cars for the 1989-90 model years had the single-cam KA, while post-lift 1991 and up models received one extra cam. Thus, the average S13 driver would likely frown upon this particular specimen, but we think that makes it even more special.

That’s because we prefer the sleeker, “pig-nose” styling of the earlier models, named for the Mamoru Aoki-designed twin faux grille openings, a trademark that propagated through much of the Nissan line during the 90s. Since you’d be getting the KA no matter what — and on a car like this a swap is out of the question — you might as well get the one that looks better. In our opinion, only a two-tone coupe would be a more desirable S13.

The price is $9,950. At the time of this writing, 10 offers have all been turned down and there’s one day left in the listing.

permalink.
This post is filed under: for sale and
tagged: 240sx, kidney anyone, nissan, s13, silvia.