KIDNEY, ANYONE? Nissan President Sovereign VIP going up for auction 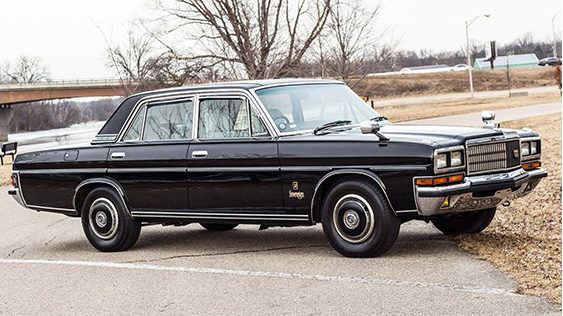 In recent years we’ve seen 2000GTs, Skyline GT-Rs, Z432s, Cosmo Sports, FJ40s and Centurys cross the auction block at some of the most high-profile auctions in the US. This weekend, a new contender will try to make a play for becoming the next blue chip JNC. A 1987 Nissan President will be up for bidding at Auctions America in Fort Lauderdale, Florida.

The top dog in Nissan luxury, the President was perhaps best known as a chauffeured ride for government officials, captains of industry, and yakuza bosses. And this is no ordinary President; it’s a Sovereign VIP, the highest grade in the lineup and built for only the final five years of the H250 chassis. That may seem like a long time, until you realize that the generation began in 1973. It’s so VIP, it says so right there in the name.

Win this auction and in addition to a 4.4-liter V8, you will be treated to such amenities as reclining and heated rear seats, a rear-mounted cassette deck and TV, a remote control for the dash-mounted stereo tuner and, naturally, a full set of doily seat covers. Then all you’ll need is a white-gloved driver to shuttle you around town. You can find more photos and the full listing on the Auctions America website.

permalink.
This post is filed under: for sale and
tagged: h250, kidney anyone, nissan, president.

20 Responses to KIDNEY, ANYONE? Nissan President Sovereign VIP going up for auction