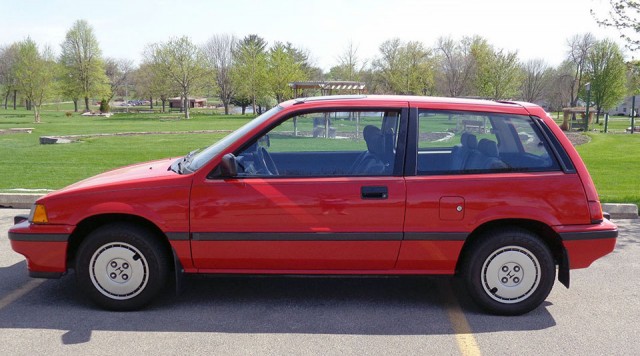 Have you noticed? Original, mint-condition, late-80s Hondas  have been coming out of the woodwork over the past year. On eBay, right now, there are two Civic Si examples, both incredibly clean, while a similar-condition CRX Si auction just ended. Are we seeing a classic Honda boom?

First up is a 1990 EF Civic Si from Santee, California with just 41,000 miles on the odometer. Though it has some modifications like shocks and springs, a stereo, exhaust, and wheels off of an EK Si Coupe, the owner at least had the foresight to keep all of the OEM parts, which are included in the sale. The seller claims a perfect interior and no mechanical maladies.

With the popularity of the EF platform in the Honda hipster community, clean examples are being waylaid in the name of stance on a daily basis. Three days remain on this auction, which stands a at $6,000, reserve not met.

Next we have a 1986 EA Honda Civic Si, painfully original with 57,033 miles. This is the car that changed the Civic from a sensible, fuel efficient hatchback to a Kanjo-terrorizing menace.

As if having an uber-clean, one-owner version of the top US-spec Wonder Civic wasn’t enough, the seller claims that it has always been kept in a heated garage and that the sunroof has never been opened. Hell, the vanity license plate even says “RAINSHY.” It’s being offered for $11,ooo and less than a day remains on the timer. The car currently resides in Cedar Rapids, Iowa.

We first reported on phenomenon at JCCS last year, when a surprising number of stock (or close-to-stock) CRXes appeared at the show and we’ve seen other low-mileage low-mileage CRX and EF Civic Si specimen surface.

We thought nearly all such examples had been hunted to extinction by tribal-tattooed backwards hat-wearers, but Hondas certainly sold in greater numbers than, say, TE27s so perhaps these are simply the next coelacanths waiting to be discovered.

permalink.
This post is filed under: for sale and
tagged: civic, civic si, crx, ea, ef, honda, kidney anyone.