Up for sale in the San Gabriel Valley outside Los Angeles is a 1973 Toyota Corolla Deluxe Coupe that looks as about as original as one can be. It has a claimed 68,000 miles on a 5-digit odometer, but the lack of tears in the original vinyl seats would seem to back up that claim. 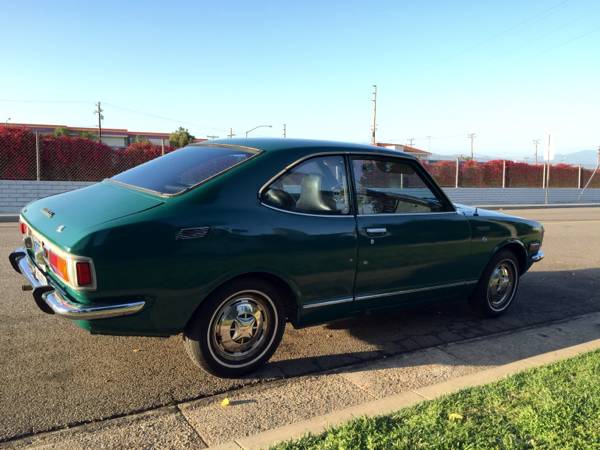 Toyota’s TE27 chassis formed the basis of the first Corolla Levins and Spritner Truenos, legendary street fighters from the golden age of Japanese classics. Due to their light weight, rear-wheel-drive layout, two very distinct car cultures have converged on the TE27 as the blank canvas of choice  — those seeking to replicate Japan’s twin-cam street and circuit terrors, and drag racers that want to gut it and swap a 600hp turbo single-cam or rotary engine into it. This results in the systematic culling of a very short supply of cars that were already rare to begin with.

In fact, we are extremely surprised to find a bone stock TE27 still alive, running, and with up-to-date registration tabs in the heart of SoCal’s Japanese modding hotbed. It’s as if the last wooly mammoth was somehow just found chillin’ in downtown Winnipeg going, “Oh, you guys were looking for me?”

Demand for clean TE27s are so high that even its automatic transmission wouldn’t be enough to deter the typical TE27 hunter. The fact that it’s “ready to drive off” makes it even more tempting. See it on craigslist for $4,700.

permalink.
This post is filed under: for sale and
tagged: corolla levin, kidney anyone, sprinter trueno, te27, toyota.