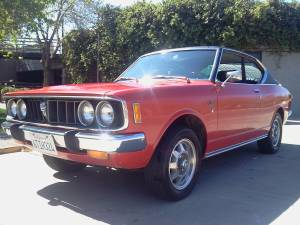 Ben says the RT90 Corona Coupe is ultra rare. However, I’ve found him about three to four examples floating on the lists of craig. This black-on-red ’72 is similar if not identical to the one owned by the Toyota USA Museum and boasts a documented 35,000-mile odometer. Like most, the 18R-C is paired with a Toyoglide three-speed auto. Though the wheels appear to be from a later Corolla, the owner assures speculators that the rest of the car is complete and a rust-free specimen from Phoenix. Buy it on craigslist for $6,000 and be twinsies with Toyota at the next TORC show.

permalink.
This post is filed under: for sale, toyota and
tagged: corona, coupe, kidney anyone, rt90, t90, toyota.